Do You Really Know Your Parents if You Don’t Go Through Their Record Collection?

Who we are is what we listen to

I’ve made a 4 ft wide, 7 ft long landing strip of vinyl records on the living room floor. They range from Grateful Dead studio albums, to Grateful Dead live albums, to solo projects and collaborations from members of the Grateful Dead… one square is missing.

My father is lost in the eyes of psychedelic bear. 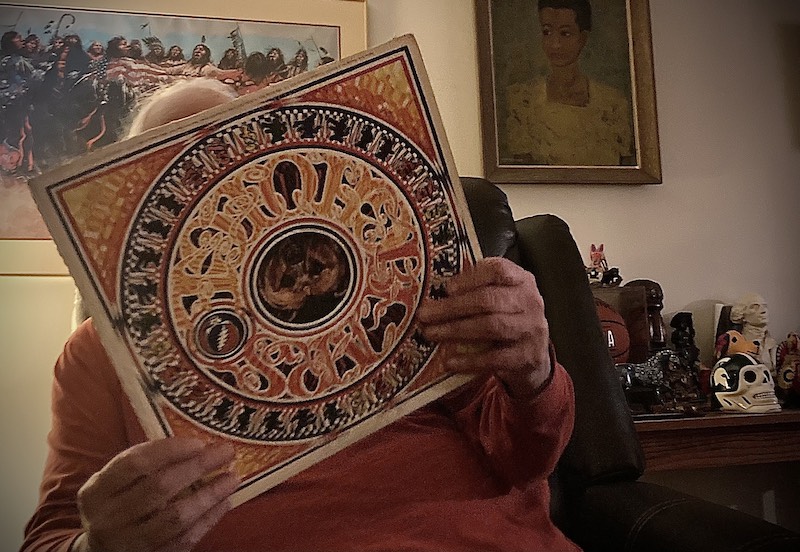 “Man that is a cool album cover,” he whispers with all the wonderment of a 22-year-old on a ten-strip of acid.

Dad’s been inspecting the record sleeve for minutes from the big reclining chair, his giant hands grasping it like a sacred tablet.

One peculiar thing about Bear’s Choice, which was released in 1973 by Warner Bros, is that the front looks like the back and the back looks like the front. The track listing is on the cover, which is a red, white, and blue kaleidoscope design with a steal-your-face skull in the middle. The back’s more fantastic. There are three circles inside one another: the innermost features the lifelike head of a brown bear, the middle ring has the 11 letters of the title in curly script where the characters crash into one another, and the outer circle contains a multitude of dancing bears.

The certificate of authenticity on a Tom Curtin-owned vinyl album is a 1.5 inch long rectangle of tape on the bottom left corner of the LP. Some of that record-keeping was done with electrical tape and some with beige masking tape, which has metamorphose over 50 years into a strange translucent brown.

This sleeve, designed by Bob Thomas for Owsley “Bear” Stanley – the Dead’s visionary live sound engineer and chief proliferator of LSD in the Sixties and Seventies who’d recorded and selected the live cuts – is the first appearance of the iconic “Deadie Bears.”

He delivers those words like it had been the death of a family member. And the Grateful Dead is a big part of our family. From infancy in the mid-Eighties until 1995, our parents had taken my brother and I to Dead shows. My earliest memories derive from those many concerts: my mom pulling the cotton balls out of my ears when the band veered into “The Wheel,” getting separated from my parents and being disoriented in a field of twirling “spinners,” and – later in our lives – seeing Jerry Garcia’s porcelain white hair and beard lit up in a spotlight and seeming Godlike.

When my father is finished vibing out to the album cover he calls me over and asks me to put it on the wall – bear side out, of course.

Once a decade, when I’m back home in the wilds of rural northern Michigan, I go down to the basement and pull out two large, heavy cardboard boxes of my parent’s vinyl records. I carry them upstairs and spend a couple nights sitting around with my folks, pulling out records and talking about them.

Why do I do this? Because I want them to give these records to me.

The sounds contained on these exclusively 12-inch discs no longer play through the home’s massive Klipsch speakers. My folks now primarily listen to Sirius XM satellite radio, which contains a Grateful Dead channel, which contains a show called the Big Steve Hour, hosted by Jerry Garcia’s personal roadie Steve Parish, of which my father is a regular caller. So they wouldn’t notice these records being part of my own unwieldily vinyl library in Austin, Texas.

It’s the end of March and I’ve left Austin, where’s its 80 degrees, for a week and a half in northern lower peninsula, where it’s hovering around 0 degrees and especially icy. I’ve come home because my mom got several bad breaks in her leg after falling on said ice and is temporarily in a wheelchair. They live in a relatively remote area and my father has mobility issues due to Parkinson’s so I’m trying to be helpful… by covering their floor with records. 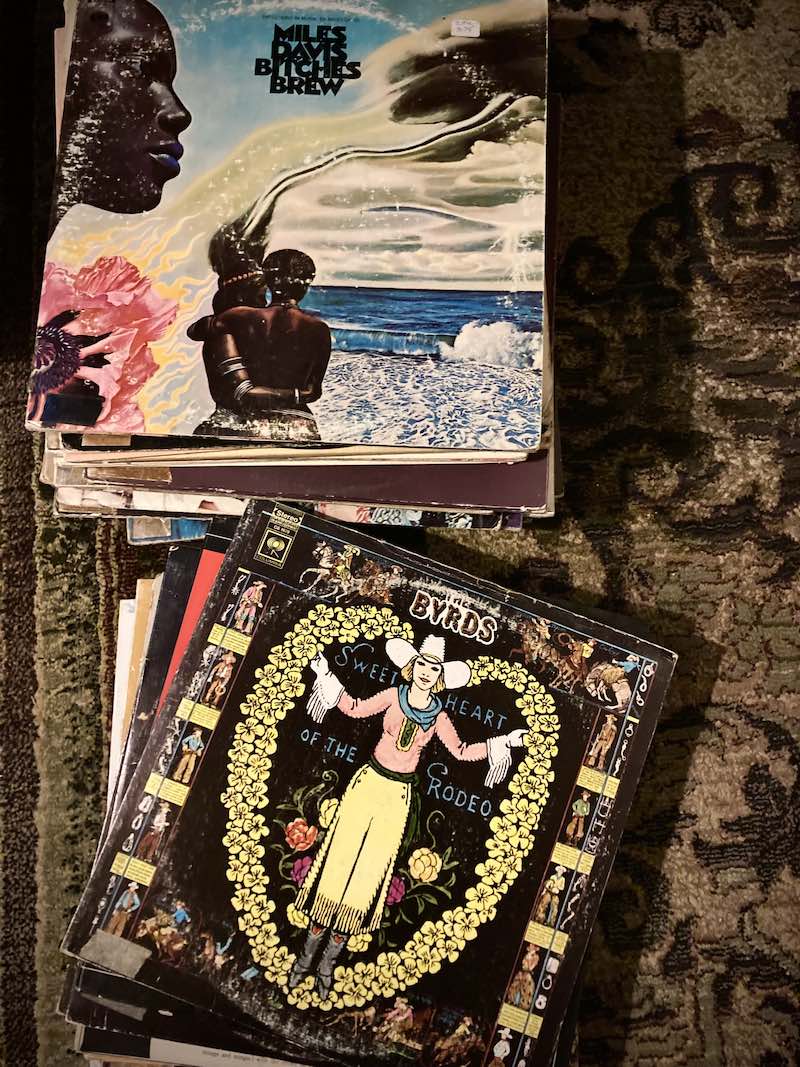 For someone in their 30’s, it’s easy to dismiss your parent’s record collection as standard boomer fare: Neil Young, the Byrds, the Beatles, Cheech & Chong, Dark Side of the Moon, and that Jefferson Airplane Long John Silver LP with the sleeve that folds out into a humidor (more often used as a stash box). And, yes, my folk’s vinyl cache has all that (their copy of Cheech & Chong’s Big Bambu is missing the giant rolling paper – must have gotten used), but in March I’m once again reminded that my parent’s library is a deep, interesting, and compelling library of their taste’s present and past.

I find a lot of Aretha Franklin – including the underrated mid-Eighties LP Who’s Zoomin’ Who? (which sounds like the title of an album released in 2020) – and Tina Turner too. Los Lobos looms large — particularly early work like breakout EP …And a Time to Dance – and there’s a shit ton of Commander Cody & his Lost Planet Airmen, who were a favorite live attraction for mom and dad in the Seventies. Connectedly, I still see Commander Cody’s marvelous guitarist Bill Kirchen play frequently in Austin. Same for Asleep at the Wheel, whose discography generously populates the familial crates. I know Ray Benson personally now and it’s only now occurring to me, looking at track lists, that I’ve been listening to his band my entire life.

The certificate of authenticity on a Tom Curtin-owned vinyl album is a 1.5 inch long rectangle of tape on the bottom left corner of the LP. Some of that record-keeping was done with electrical tape and some with beige masking tape, which has metamorphose over 50 years into a strange translucent brown.

“You had to mark your shit so people didn’t steal it,” my dad explains.

I believe the music we listen to contributes colorful tiles to a mosaic of who we were and who we are.

This apparently wasn’t an altogether effective means of theft-prevention as my dad regales me with stories of ne’er-do-well roommates hocking his records and one time that his entire collection was stolen from his front yard while he was moving.

My mom notes they’d ultimately bought three or four copies of certain albums of over time because they’d get lost or worn out through thousands of spins.

“We didn’t watch TV,” she notes. “We just listened to music.”

The official seal of black tape is on Herbie Hancock’s Thrust album, but a handful of other choice jazz LPs – including Jaco Pastorius’ 1976 eponymous work and Freddie Hubbard’s Backlash – have someone else’s name written on them. When I read out the name out loud, that individual is revealed to be a roommate who bailed on rent – evidence that my dad’s procuration of albums wasn’t entirely above-board.

“Jazz… I never really listened to,” Dad brushes off. “We listened to blues.”

That accounts for their copies of a Vanguard-issued 1965 live album from Mississippi John Hurt, Muddy Waters indispensable Hard Again, and that B.B. King Live in Cook County Jail that feels like it’s made of denim.

Bluegrass, which runs deep in my family that has songwriters and pickers on both sides of the tree, factors heavily into my progenitor’s vinyl bins. At the sight of the 1973 Muleskinner LP, dad calls that record a “gamechanger for me.” Meanwhile a multitude of Doc & Merle Watson releases prompt memories from my mom of seeing the perfecter of folk/bluegrass and his red-hot scion play at Michigan State University.

Why do I do this? Because I love talking about music as much I love playing it.

Discussions like the ones prompted by this musical show-and-tell elucidate unknown connections and tell stories about our lives and the lives of others. One thing I find special about music is that it facilitates time travel. Hearing music puts us back to places we didn’t know we remembered, but so does talking about music. These couple hundred records, which have traveled up here from Lansing and southwest Michigan where my parents grew up, contain a personal, playable universe unto the people who made me.

In it, somewhat predictably, there are two copies of the Beatles White Album, which as far back as I can remember has carried weight in our household over Sgt. Pepper’s Lonely Hearts Club Band as the Liverpool quartet’s greatest achievement. In fact, the furthest back memory I have of being scared by a piece of art is laying alone in the dark in a house we only lived in until I was 6 and hearing the 52 seconds of “Wild Honey Pie.” To my young brain, the vocals sounded like ghosts and the music like a war party.

My mom, raised along with her five siblings by a single mother, tells me she remembers buying the album at age 13 with money she saved up from working.

Some connections uncovered in the record dive yield more humorously inane memories. When I ask my dad why he has so many David Bromberg LPs, he replied: “I liked him for a while, but then soured on him over some strong opinion… that I can’t remember.” Looking into it myself, I discover nothing remotely controversial by the Americana forbearer.

Nonetheless, I believe the music we listen to contributes colorful tiles to a mosaic of who we were and who we are. A pictures worth a thousand words, but some of these albums extracted stories easily 5,000 words long.

So, really, why do I do this? Quality Time.

I’m left with the notion that my parent’s record collection is perfect because it’s theirs. In some sense: Your records don’t make you cool… you make your records cool.

I’ve come away form the experience with a new perspective. I used to want my mom and dad’s collection – integrating them into my own wall of sounds. Now, I want to preserve it.

If I can ever pry it out of their possession, the Tom and Christine Curtin record collection will live whole as its own entity – and can be passed amongst the kin. Because those albums tell a bigger story when they’re together. Just like people.

Author’s note: Kevin Curtin wrote this story because it was cheaper than buying gifts for his parents. Father’s Day is today and his mom’s birthday is two days later.