The Mystery of the Mysterines

Why did I fly 1,500 miles to see Liverpool’s sixth best act? 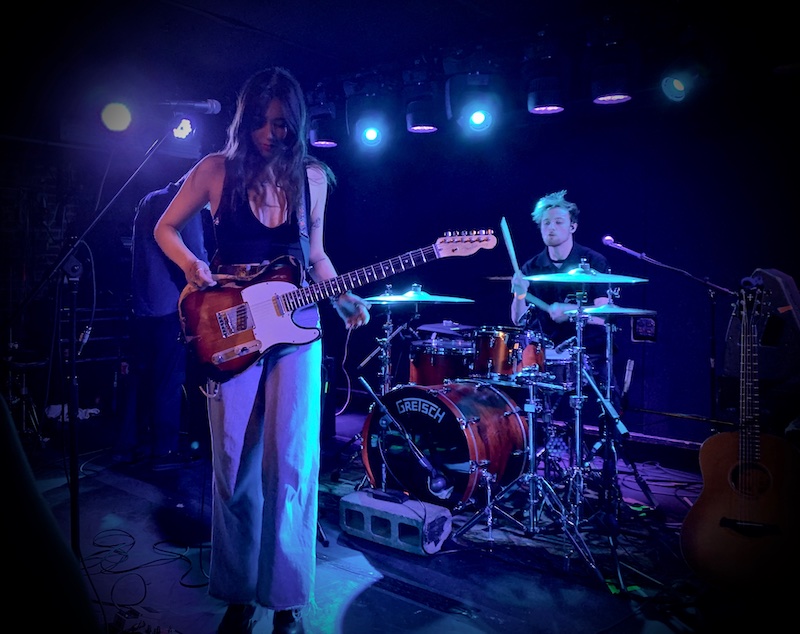 Mysterines live at the Mercury Lounge in NYC. (Photo by Raoul Hernandez)

Two years absent from local stages – canceled outright in the first blush of our global health disaster and then online-only the next time around – SXSW promises to come back twice as robust next March, but last year, its laptop iteration served as the same lifeline that all online music constituted during the initial stages of Coronavirus.

Reviewing livestreams and longform videos from South Congress to Helsinki, I happened across a 20-minute set shot in a quarantined club of a quartet from Liverpool. Attired almost exclusively in black, the Mysterines pushed, pulsed – throbbed – indie rock in a deep shade of noir. Metcalfe’s fierce delivery and spellbinding presence proved so invigorating, I played the clip repeatedly and eventually filmed it to my iPhone.

Indie rock as a so-called genre never fit comfortably with me past L7, but the Mysterines reminded me of SoCal scrappers Concrete Blonde, my first roadshow here, Austin Opera House 1992. Poetesses fronting rock backs – Johnette Napolitano, Chrissie Hynde, St. Patti Smith – not only work wonders all their own, they stand out in a sea of testosterone. Metcalfe’s coiled passion thawed swathes of my pandemic numbness there in March, April, and May 2021.

A grand total of seven tracks from the Liverpudlians populated online, so a trip to the band’s e-list occurred next, and sure enough, last fall’s pre-order of their full-length debut netted my $36 for imported white vinyl, which arrived this (briefly) white winter in Texas along with news of a first American tour. No SXSW showcase (damnit), and only 15 U.S. dates – none closer here than Atlanta and Florida – somehow incited more in me than simply serious FOMO. So much so, in fact, that I broke my own 30-year instruction to music freaks in the Live Music Capital:

“Don’t travel for music, because everything comes here eventually.”

Nevermind personal forays to New York for Aussie proto-punks Radio Birdman, and New Orleans on Halloween for Nick Cave at the House of Blues, or the heart of San Francisco for two-headed Texan barker Gary Floyd – save that travel budget for Shangri-La and not an act booking here next festival. (Gidday, Radio Birdman, destroying the front room of Emo’s that same year.) When the Mysterines concluded their 60-minute, no-encore performance at live music legacy the Mercury Lounge, Metcalfe announced her band’s return to these shores this fall warming up for AWOLNATION.

See y’all at Stubb's on November 6.

Obviously, that impacts ZERO on the Mysterines last Wednesday during my 25 hours on the ground in Manhattan. Metcalfe, co-founding bassist George Favager, guitar specialist Callum Thompson, and backbeat Paul Crilly plowed through the entirety of Reeling with barely a break for a sole tequila shot to commemorate their first bite of the Big Apple. Propulsive and pledging, opener/standout “Life’s a Bitch (But I Like It So Much),” the undulating, resonating title cut, and late-set punky blackjack “Hormone” from cracking 2019 EP Take Control thumped a roomful of coverts visibly vibrating sound waves and strobe lights in unmasked unison.

“Am I really here?” I wondered. “Did I seriously do this – spend all that money?”

Driving up Airport Blvd the next afternoon, headed home to East Austin, I ranked pop groups from Liverpool: the Beatles, Echo & the Bunnymen, Carcass, OMD, Clinic. Still unsure of my motivation for such a boutique experience when home repair alone from the past 26 months dictates fiscal conservancy, I recalled the black hole heart of COVID isolation and the tether music provided. Now, as people resume clubbing, bonds forged through calamity assume a whole new meaning.

The Mysterines will rock Austin as inevitably as any Lone Star summer. And having traveled to witness it previously won’t dampen its grungy grandeur or the sheer thrill of populating the same space as a howling Lia Metcalfe. I recognize now that glomming onto a baby band represents a pledge to myself at a juncture when, like millions of others, I pivoted careers, leaving newsrooms full-time for classrooms three-quarter time.

A promise made not only to keep documenting musicians, but to remain connected to the greater human condition through crisis and in good times via the universal divinity of live music.