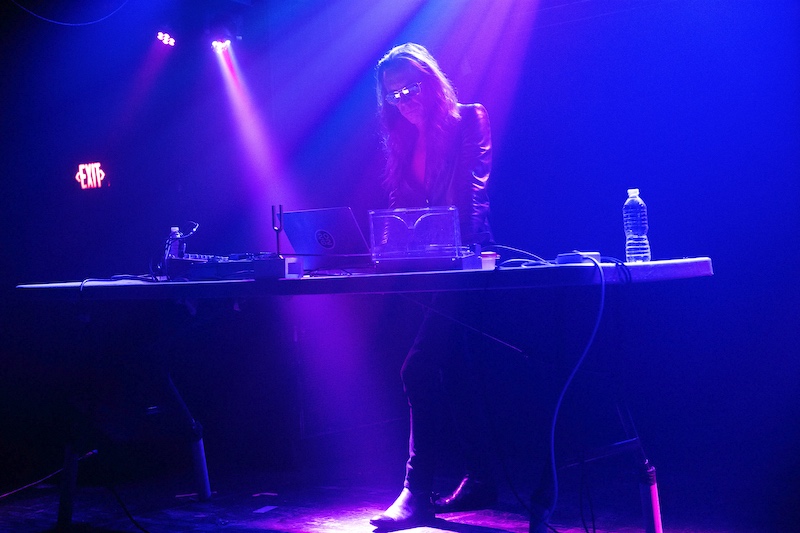 Sitting at a rent-a-table with his modular synthesizer and a mic, the latter Brooklynite began the seance in aquatic tones, submarine sounds – sonar. Rising aria-like, his resonations expanded as he plucked wires, adjusted knobs, mixed samples. Inside Lowe’s iron lung, the room began to breathe as he sang, voice climbing high and wordless. Heartbeat beats reverberated, their accents popping louder and louder. You’re inside something big and breathy, internal organs pumping blood all around you.

Everyone stood stock still, yet swaying – transfixed. Sound pushed and pulled them as if underwater. Lowe’s hair silhouette glowed.

Suddenly a fog horn blasted into a tunneling, post-industrial sound, or perhaps still the sea – at night, rising up. Leviathan. Now someone’s maybe mashed down on the whole of an electronic keyboard, high-tension vibrations dripping with melody. At one juncture, Lowe reared back, gripping the mic at his lips. Thirty-nine minutes of narrative aural possession stroked out.

“Hello, Austin, dammit,” went off William Basinski not long afterward, the boxer throwing air punches before a fight. “Town, I am telling you, in the world, what the fuck is going on? It just gets worse and worse every fucking day, as if we haven’t been tortured enough for the last six fucking years. You people in Texas, since Ann Richards died, I don’t know what the fuck happened with all these goddamn motherfuckers. Fucking bastards, up in here, ruining everything for all of y’all and spilling out over us.

“Fucking hell, get rid of that shit. Take out the trash, honey. Don’t let ’em mess you.

“Don’t mess with Texas! I’m from fucking Texas and I ain’t coming back until this shit is cleaned up. You want me to come back, you better clean up this mess. Jesus fucking Christ. Holy shit, well, this shit has got to stop.

“That’s basically what we’re talking about here tonight, and I’m just gonna get right in on it, right now – okay?

Hands on three sets of electronic consoles, plus a laptop and a rotating reel of 1/4 inch tape spooled around a tuning fork, the 61-year-old “flamboyant” manipulated a wash of sound, ebbing and flowing, but mostly flowing: rising, expanding. At the moment two tools in the bar begin blabbing over a rapt room, 200-plus at least, he spiked the volume way up, drowning them out completely and pleasingly so. 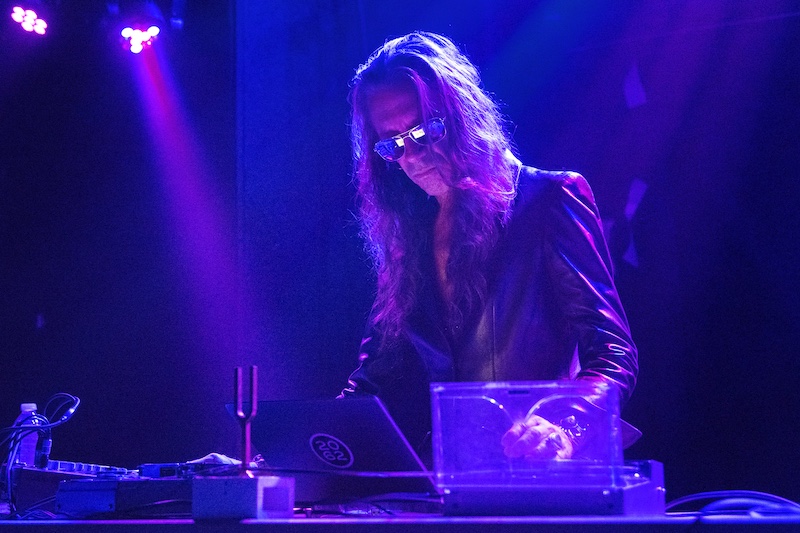 Afterward, he swam through some disintegration loops: samples of vintage melodies eroded at intervals by angry blasts of sound as Basinski twisted and writhed out front of his machines like a sixth member of Def Leppard on MTV in 1983. Meet experimental sound’s undisputed rock star, a David Bowie of aural beguilement.

He put on something operatic and air conducted it, lip-synching it, his long arms, hands, and fingers snaking in the spotlight like Jack Skellington. Stripped to the waist, he remade the Texan cowboy as the sampled voice singing the great gig in the sky kept getting interrupted by bursts of static. Your mind sticks to the throughline desperately, waiting for resolution, while the other half of your lobes tries to hear past the auditory disfiguration.

Again, spellbound by such sound and vision, the audience swayed soundlessly, like a silent disco, the actual music Basinski made getting softer and softer, fading out – 44 minutes, done.

“Oh, man, thank you so much,” he louches in abject rock star affect. “You guys are really so [inaudible]. Okay, the goth show’s gotta start so we had to cut short, but that’s enough, I think, right? 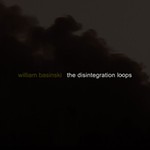