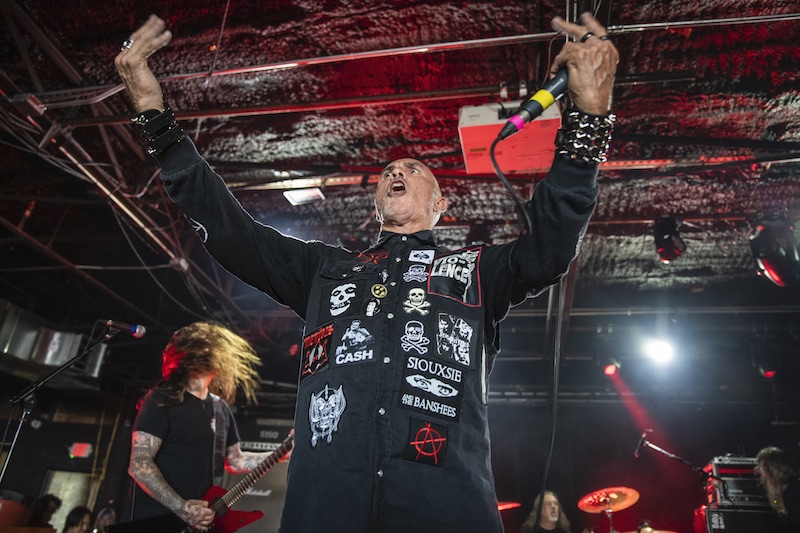 Sean Killian of Vio-lence drinking it in at Oblivion Access. (Photo by David Brendan Hall)

Defrosting debut Eternal Nightmare in its entirety, the seminal shredders no one saw the first time around resurrected in spectacular fashion. A hundred 20 seconds into a 50-minute mosh, the circle pit broke out and induced cartwheels of exhilaration from one compact, curly-headed dude standing next to us later for Youth of Today (dap that fist, hombre). Vio-Lence dropped the OG thrash and everyone nodded, headbanged, and threw knees and elbows in approval.

Killian possesses a higher, piquant delivery as shiny and smooth as his dome, with flickers of Jello Biafra. In a buttoned-down black vest emblazoned with patches – Misfits, Vio-Lence, an iron cross – his look conjured a grinning, manic, modern Max Schreck (Nosferatu). As the bass kicked like a mule and both guitarists practiced shock treatment, Killian convulsed, jolted, and smiled ear-to-ear. Bursts of lyrics accompanied speed and momentum: mass.

“Serial Killer” decimated, “Phobophobia” dropped into an iconic march, and “Calling in the Coroner” pulled the ripcord.

“This is a song about injecting junk into your neck,” shouted Killian.

Peak pit hit, the three guitarists onstage rampaging like a running of the bulls for the ensuing “T.D.S. (Take it as you will).” Next, “Bodies” rained a shitstorm as the mob in the middle pushed each other and the band picked up velocity, its roundabout stoking a merry-go-mosh of glee with twister riffs. “Upon the Cross” off the new EP nailed it.

Neither Pauly Shore nor Brendan Fraser made appearances, but never did the Eighties crackle so legitimately four decades on.