For the love of “hate rock”

After two days of death metal, thrash, and hardcore, a quieter, minimalist act like HTRK might seem like a soothing experience, a balm after the relentless blast beats and heavy distortion.

The eardrums might appreciate the change, but once the Melbourne duo’s cryptic noirtronica sets in, HTRK (“hate rock”) proves equally as agitated and disturbing. 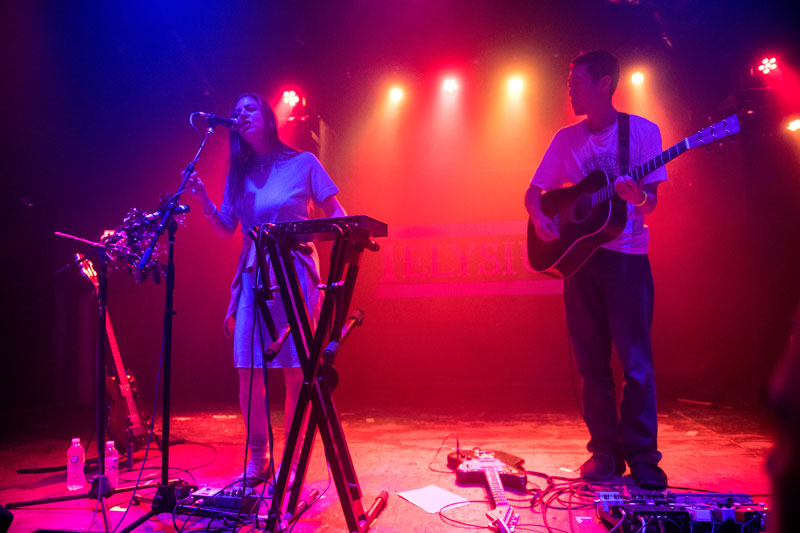 Jonnine Standish and Nigel Yang of HTRK performing at Elysium for the Oblivion Access festival. (Photo by John Anderson)

Following a set by the noisy, oddly tuneful Author & Punisher (a nice transition following the savage Blood Incantation), singer/bassist Jonnine Standish and guitarist/programmer Nigel Yang took the stage and immediately triggered the throbbing drum pattern that powers “Sunlight Feels Like Bee Stings,” the glitter-eyelidded Standish snapping her fingers to the artificial beat like a 21st century jazz singer. A highlight from last year’s studio LP Rhinestones, which provided most of the setlist, the song opened an enigmatic window into the duo’s vision: pretty melody, mechanical beats, and Standish’s rich voice delivering lyrical ambiguity like “Sunlight feels like bee stings and you set my mood” like a confusing come-on. The mixed messages of the quiet, but unsettling “Mentions” – “Even with your soft obsession/ It’s not enough attention for me” – and the noisy aggression attacking the implied sexiness of “Body Lotion” indicate toxic relationships on life support.

But those felt like Hallmark cards compared to “Rentboy,” an even more troubling tune taken from HTRK’s 2009 landmark Marry Me Tonight. Its protagonist calmly accepts “Your new release all over my face” as well as admitting “I hate my work.” The groovy drum pattern and lovely melody can’t disguise the bitterness and loathing (both for self and partner), and the lack of musical obfuscation just makes it more devastating – no thundering drums or wall of distortion needed. After the clamorous “Poison” and the pretty but dour “Reverse Déjà Vu,” the band lightened the mood with “Kiss Kiss and Rhinestones,” a more overt exercise in romanticism, but one still marred by uncertainty: the word “if” appears too many times for it to be the paean to love it seems to want to be. 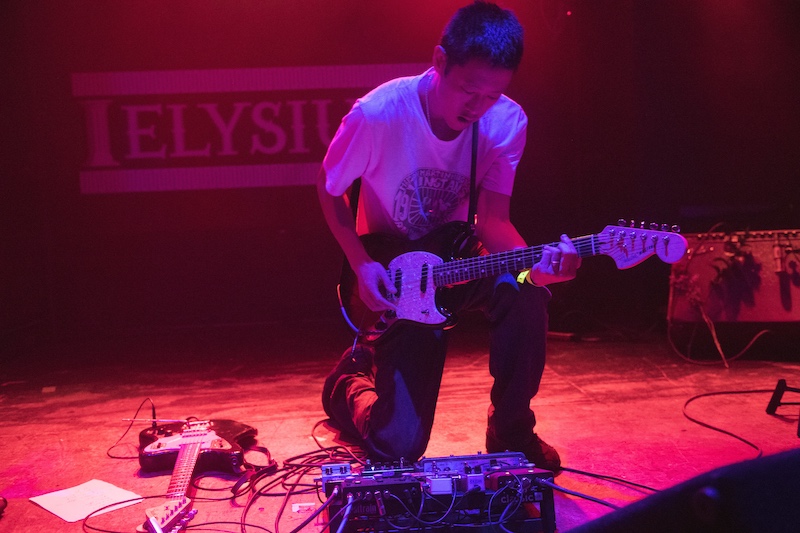 HTRK ended the show with “HA,” another mellow harshing stab in the heart from Marry Me Tonight. “Can we get back together?” Standish repeatedly asks, before answering for her love object with a monochromatic “ha ha ha ha ha,” which is either an attempt to pass off earnestness as humor or a cruel joke. Either way she’s making offers she never intends to fulfill. Never mind – the rapt crowd’s enthusiasm indicated approval, and HTRK walked offstage with our full support, whatever their intent.

Standish spoke little over the course of the hour-long set, letting the performances speak for themselves. That proved to be something of a struggle, not because the band didn’t play well – they definitely did. But the soused chatter on the bar side of the club nearly overwhelmed the music; it was only the pair’s commitment and intensity that kept the songs from drowning in idle chitchat. Next time HTRK comes to town, let’s hope they play a more conducive, listener-friendly room.