Sun Up to Sun Down: Thou Crushed Double-Shift at Oblivion Access

A great, lumbering beast from the bayou treads into Valhalla

It was the late night end to a very long day. Not just for sweaty, sun-tired metalheads, but also the soon-to-be-legendary group that would serve as the exclamation point of Oblivion Access’ Friday offerings: Louisiana doomers Thou.

Having played one of the day’s earliest sets, second band up on an afternoon show at the Belmont (an interesting venue choice for such a festival), Thou split their two Friday performances by 12 hours. Festival veterans know that this is hard to do for fans, much less the musicians.

But this did nothing to blunt the edge of Thou’s onslaught. The sextet, intimately stuffed onto the stage at the criminally under-celebrated Valhalla (the ex-Room 710 venue in the Red River Cultural District, not the esports name stealers on West Sixth.) The unique 360-degree bar and cozy interior set the scene for a crushing hour from the southern six-piece. 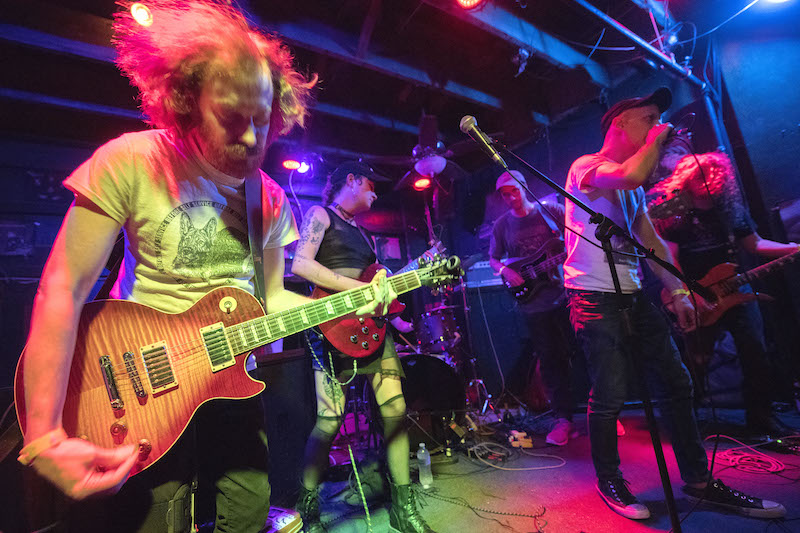 Thou performing at Valhalla for Oblivion Access festival. (Photo by John Anderson)

The lights went down and without ado, the band lumbered into earlier works with their unique brand of southern twang on top of doomy, longform composition, with Bryan Funck’s throat blistering blackened screeches flying high over the three guitars, ever steady bass, and remarkably complex drum work.

While Funck shrieked to the middle distance, the band really showed their range and transcendence above their southern sludge roots. There were times of slow, ethereal reflection when the music would drop down to only a clean guitar and almost jazzy drum backing. And for a lot of fans, it was an exciting first time to see them with their clean singing rhythm guitarist KC Stafford, who’s soulful belting added an entirely new element to an already sophisticated listening experience.

Their out-of-the-box take on doom metal, layered with a bleak black metal darkness, juxtaposed with the band’s very human and approachable nature onstage. Humor and friendly ribbing of each other and friends in the crowd made the experience welcoming for both devout fans and newcomers. Added to that, founding bassist Mitch Wells’ almost constant smile – and head nods of approval to grooves that seemed to hit him especially hard – instilled a relatable essence to a sound that can be described as a great, lumbering beast from the bayou.

With the strings and vocals leaving absolutely everything on the stage, it would be easy to forget the band was working the second half of a double shift, having already braved a blistering Texas sun neither forgiving nor relenting. And yet, after a day of unseasonable near 100-degree weather and now a packed room on Red River, well after midnight, it would be difficult to overstate what the drummer offered of himself for the night’s witching hour ritual. Tyler Coburn’s physical prowess and power were poured onto the kit, with strength and speed that, more than once, garnered a look-back from his fellow bandmates. It would seem that the band and audience were in agreement: this was a performance to remember. 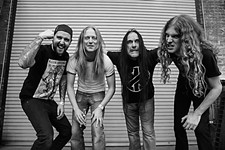 The Locust’s Gabe Serbian, Who Once Lived and Drummed Locally, Has Died at Age 44
The Locust is scheduled to play in Austin on May 15