Review: Rapper Billy Woods Has the Most Intense Lyrics at an Extreme Music Festival

His lines read like a poetry book bound in human flesh

In an extreme music festival, replete with metal bands that sing about disembowelment, Billy Woods might have the most intense lyrics of all 100-plus acts on the poster. 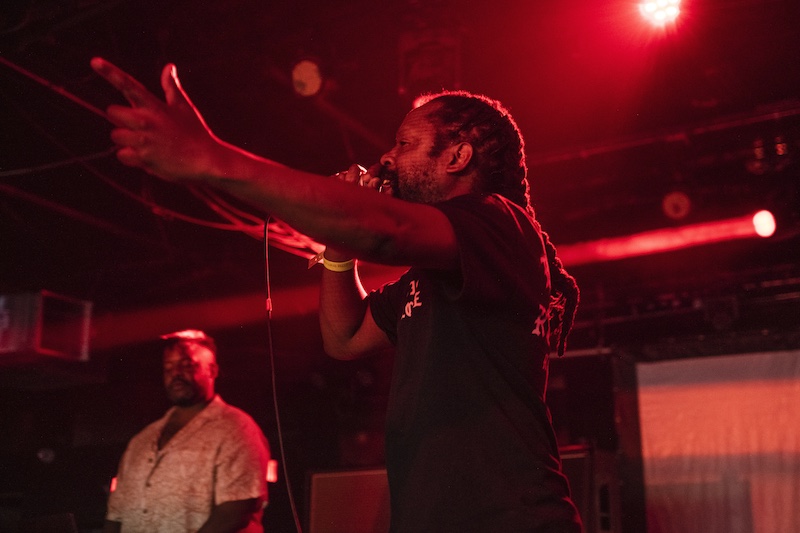 The New York rapper was strolling down Seventh Street alone ten minutes before his set time at Oblivion Access. No crew, no air of self-importance, no hurry. That casualness carried on when he hit the Empire stage, addressing Texas opener Fat Tony.

“I usually see you in New York,” Woods said. “I feel like David Attenborough – seeing Fat Tony in his natural environment.”

With the friendly nonchalance of someone performing at a friend’s backyard party, he explained that he had a short set so’d try to get through as much material as possible, but warned that he’d probably truncate some songs. Then, as his Armand Hammer groupmate Elucid cued up the free jazz intro of “Asylum,” a track built upon vivid family scenes of his childhood in Zimbabwe, the vehemence he exhibits on the mic overtook him.

Three minutes later, many of the several hundred fans were shouting a hook: “Cannibal tours, they came on all fours/ Waterborne, eyes like Jaws/ Bones litter the beach – gnawed/ Cracked meat out the beast's claws,” from Wharves, another track off the latest link in his 24 karat discography, Aethiopes. The April LP, with lyrics that sometimes read like a poetry book bound in human flesh, is loaded with harsh historical narratives. It’s also one of the most interesting American records of the year.

“You promised! You promised” fans chanted over the grooved-the-fuck-out bass line of “Spongebob,” a song about the battle of Tora Bora during the United State’s invasion of Afghanistan.

Both elbows up, one hand around the neck of a Shure 58 and the other making a skyward pointed finger, Woods and his bleak, unaffected vocal delivery continued to spin the globe to visions of war and different perspectives – including a standout track from 2019’s Terror Management album with an alltime in-your-face track title: “Western Education is Forbidden.”

“Told my children Western education is forbidden/ Might as well sell what's left of your Ritalin/ No loose ends, took an acetylene torch to the filaments.”

In contrast to the severity of his poetry, between-song-Billy-Woods was cheerful and loose. On two occasions, he started songs over three times to capture an intended vibe or emphasize the first line. In doing so, he joked that it’s the Jamaican part of him that requires him to repeatedly run songs back to the beginning or cut them off early.

Wood’s bars are complex and dense, but certain stanzas have a way of sticking with you. Such was the case with closer, Armand Hammer’s “The Eucharist,” which combines a bold religious critique with a Brontë reference: “Christianity is cultural appropriation/ Free masons, Mason Betha came out the church like Satan.”

Friday’s varied seven act bill evidenced Oblivion Access’ standing as Austin’s premiere mosh pit festival. Newark’s Ho99o9, who mix elements of hardcore punk, rap, and dance music into an explosive sound, endured an awkward-as-hell 45 minute soundcheck before getting ostensibly frustrated and leaving the stage 15 minutes – only to return on fire and prompting a wild maelstrom of bodies; Detroit-to-Austin transplant Danny Brown got the night’s largest audience bouncing to a sequence of chantalong hooks like “Smokin & Drinkin,’ and Philly hardcore quartet Soul Glo closed down the concert with a set that ebbed and flowed between introspective interludes and lyrically spastic punk that had passionate pit gremlins falling all over the beer-soaked floor of the venue’s inside room.

In contrast, Woods – for 30 minutes – kept his crowd rapt, hanging on every line of what felt like an effortlessly powerful recitation by a master poet. Instead of bruised elbows, he left blown minds.