Reclusive legend of internet rap brings along a furry frenemy

At night's end, pinned in place by the dead eyed stare of a five foot tall, synthesizer-playing animatronic orange dog (trained in classical composition and named Thermos Grenadine), it became necessary to reflect that – despite the incongruity of what stood before us – a clear trajectory had led us here. 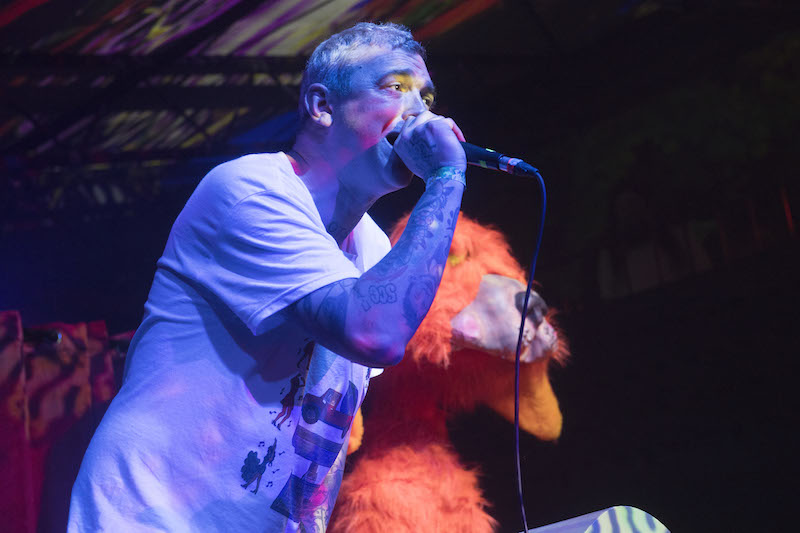 Much like the inexpressibly influential discography of the man headlining (whose now-classic 2015 album – from which he notably played zero songs – has provided the festival its moniker) Oblivion Access’s opening Mohawk showcase proceeded from an unmistakable hip-hop origin point before gradually spinning off into an esoteric netherzone of deconstructed genre fuckery.

Despite the presence of one loud-and-proud Jersey DJ (You will believe a Texas crowd, sufficiently hyped, can be led to shout out East Coast municipalities), the head nod stylings of Akai Solo and Wiki kicked off proceedings with pure Noo Yawk snarl. Pyrotechnical flows and puffed up tough talk aside, both rappers nevertheless kept things lovably goofy and off-the-cuff. Akai quizzing the audience about Lunchable varieties and Wiki admonishing himself for his novelty Oscar the Grouch shirt were early signs of the surreal descent to come.

As the sun set, things took their irreversible turn for the spectral with the arrival of Billy Woods and Elucid’s Armand Hammer. Projected with a Pollack-esque psychedelic smear, the rapper’s traded off cryptic declamations and ominous anti-authoritarian mutterings with firebrand aplomb (this is the only show in history in which a rapper has yelled “Audre Lorde on the track.”). By contrast, former trio Injury Reserve (tragically now a duo) spent most of their piercingly noisy set hidden behind plumes of endless, curling smoke. Though death looms heavily over this group – transforming their once approachable industrial-clatter into a sort of avant-glitchscape broken up by the occasional spazz-rap— the speaker shredding catharsis of it all certainly had the kids moshing hard.

Lil Ugly Mane performs so infrequently and boasts a cross-genre catalog so eclectic, that the mass questioning that preceded his set nearly drowned out the walk-on music. Would he play funny rap songs? Depressive rap songs? Psych pop songs? Black metal songs? More importantly, was he hiding underneath that furry monstrosity (wheeled on stage by Mohawk crew to deafening applause)? An answer came when Grenadine roared to life, introduced himself, insulted our beloved venue (“I’ve never been anywhere so filthy,”), and made a shocking announcement. Lil Ugly Mane would not be performing.

“Circumstance beyond anyone’s control have prevented him from fulfilling his… obligation,” the mechanical mongrel told us, his furry head pivoting on a swivel. Luckily, just as we were settling in for an evening with this Labrador Liberace, a familiar face came out of the wings screaming what we were all thinking, “WHAT THE FUCK?!” 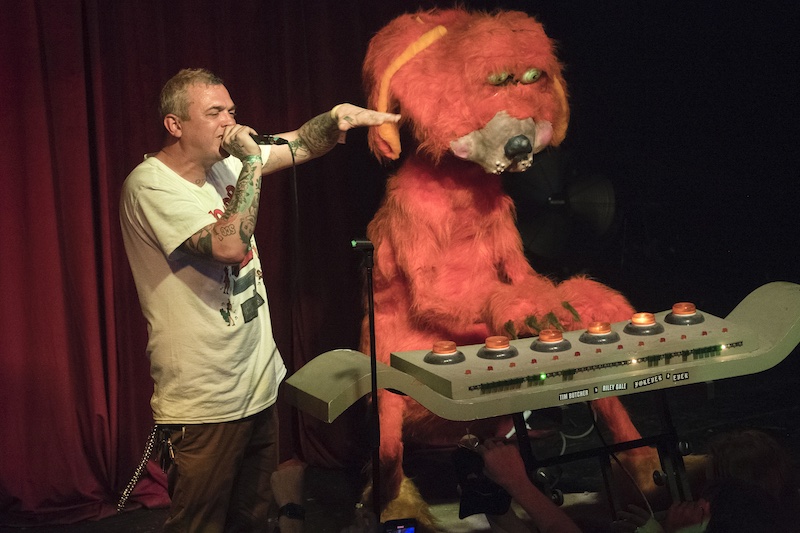 In the first of several Borscht Belt style comic routines to come, Ugly and Grenadine spared off over their combative artistic relationship (“I just feel we don’t communicate anymore.”) before Mane finally let loose his mimic Memphis drawl for three iconic/ironic bangers from 2012’s Mista Thug Isolation that had audience members screaming about “gooey shit” and diving from the stage. After that, Ugly made some chronological headway into his increasingly introspective catalog; “Stoop Lights,” especially, had the crowd huddled and swaying like kumayaba.

But, by far, the night’s chief centerpiece was the continuing cross-species banter; either expertly choreographed beforehand or puppeteered from just off-stage, the dazzling spectacle went off without a hitch (unless you include the moment when Grenadine “saw a child in the audience,” put himself “on the moral frontline” and started bleeping Ugly.) Though some in attendance seemed to resent the skewed ratio of schtick to song, to the point where there was a mass cheer when Grenadine finally powered down at eleven o’clock. But when it became clear that Ugly had departed the building to “go to sleep” alongside him, the Mohawk soon rang out with cries determined that the sleeping dog not lie.

After a Relapse Into Addiction Quietly Broke Up Street Sects, the Duo Has Exorcised Their Demons
The Gentrification V seven-inch hit last week, but Austin experimentalists are focusing on a balanced existence instead of rushing anticipated third LP