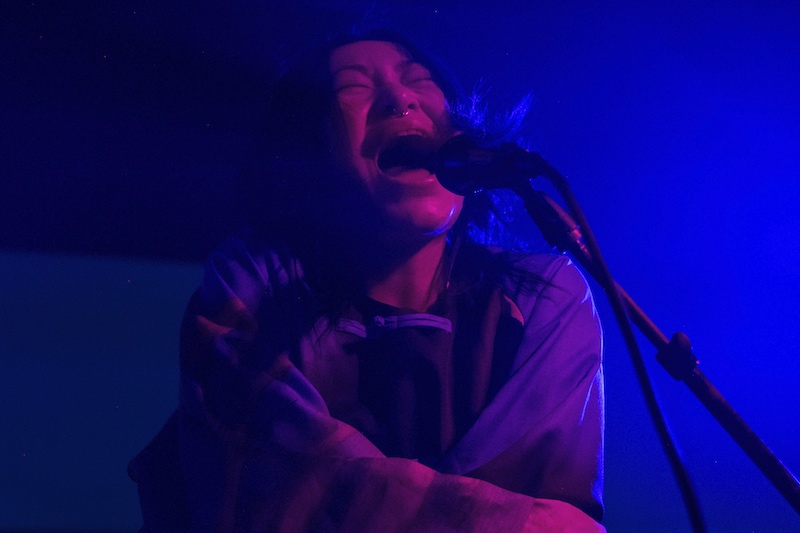 But fuck a label. Kicking off the first in a string of nearly 50 tour dates with ECW’s first gig since 2019, the Allston, MA band did what few others did on Thursday night: throw down some committed atmospherics. At 7 on the dot, to a packed inside room at Empire, frontartist Lane Shi screamed, howled, and near gurgled from way off in a corner of the crowd, draped in burned-edge fabrics, until arriving at the stage to threw her body around like a dancer as guitarist Alice Jackson, bassist Bill Cunningham, and drummer Connor DeVito crunched down on a few head nodding moments that thickened up the atmosphere like flour in a pot. Once the room was strung tightly enough with the expectation built around ECW’s dark and delicate tension, an audience member screamed. The catharsis was goofy, but catching. Laughter broke out. Someone else screamed.

Shi’s vocals stayed dark. Beginning with a string of releases from 2015, the band roaming around styles from jangly punk to complete distortion and feedback, the singer introduced a beautiful but more conventional, certainly intelligible, almost buttery vocal delivery. By 2018, Shi’s voice took on a smoke-scarred, antique jazzy screech. A dynamic full-length debut in 2019, Nocebo, issued on The Flenser, showed the group exploring atmospheric tracks to frame wild punk flailing with all the more punch because of Shi’s vocal evolution.

Not just expectation, but something like a feeling that anything might happen filled the air. Eventually, about three songs in, came Nocebo’s “Life of a Flower,” with the rest of a 23-minute set dedicated to squinching, warping noise. For moments of Shi sending dark calls into the void, the band stood almost patiently. What Shi did as the band played was vibrate. She hopped from the stage and parted the sea of bodies to walk all the way to the back of the crowd, maybe out the front door as far as most could tell, and she came back slowly. By the time she got back on stage, the round microphone skull was inserted entirely into her mouth. Holding it up by her face, Shi hurled, from her throat, muffled, mic-gagged screams. And thus ended ECW’s show at exactly 7:23 PM, about 7 minutes before the scheduled end time, though “23,” the band’s most often recorded song, would have slotted in perfectly, time-wise, to what might have been a full half-hour set.