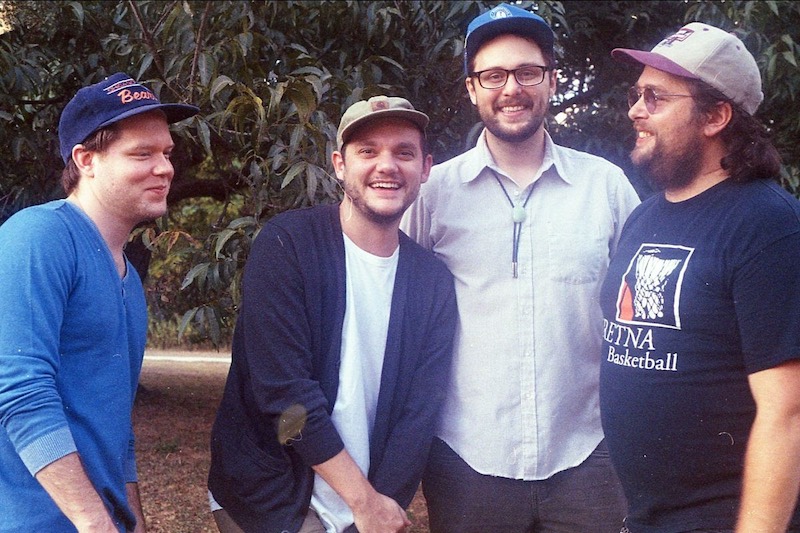 Clusters of colorful balloons suspended on the ceiling above the stage, the band was in that psychic zone where every note sounds golden, and Hotel Vegas hit capacity inside and out. No one was too cool to recognize this being a special night, especially not Good Looks.

I’ve rarely seen a band open-carrying more earnestness, sincerity, and reverence than the Austin quartet at their record release show last Friday. Unabashedly, singer/guitarist Tyler Jordan produced a piece of paper and began listing those the band would like to thank for their new album, Bummer Year. He noted, with self-awareness, that – yes – he’s acting like he just won a Grammy, but explained that a night like this is something he and his bandmates had long dreamt about.

“That was hand’s down the most insane show we’ve ever played,” Jordan reflects, six mystifying days later. “I’ve been doing it a long time, since I was in high school, and I’ve never played a sold-out show before. We’ve played a lot of shows, but in the last few months it’s really been building. We all acknowledged how nuts it was. That show was totally in-the-moment and we were really enjoying that moment.”

The audience did too.

When the heartland indie rockers played reflective material like “Bummer Year,” an ode to small town friends, the crowd was rapt. Then, during driving material like “Vision Boards,” in which Jake Ames detonated stadium-sized guitar bombs in the small club, the thick throng bounced and went crazy.

For the overt gratitude Good Looks exuded on stage, they didn’t have much time to debrief collectively on the triumph of the show, which doubled as a tour kickoff. As is customary to their personality types, the more introverted Jordan and bassist Robert Cherry, hung out at the merch table while the outgoing Ames and drummer Phil Dunnes mingled amongst friends in the packed venue.

“Jake is always the last one out – he’s such a social dude,” laughs Jordan. “So that show went like every other show: ‘Okay bye Jake, I’m going home, I’m going to bed. I hope you have a good rest of your night.’”

Good looks was heading out on a long-awaited tour, to the east coast, in the morning, but when a text hit Jordan’s phone at 3am, everything changed.

A friend alerted Jordan that Ames had been struck by a car while walking from the venue and had been taken away in an ambulance.

“We called around to emergency rooms trying to figure where he was and what happened and how hurt he was,” recalls Jordan. “We didn’t know the answers to any of those questions.”

Soon, they’d learn that Ames sustained brain injuries, fractures in his skull and tailbone, and a broken bone in his ear. Good Looks promptly postponed their tour and Jordan spent the next six days, for roughly eight hours a day, at the hospital Ames’ girlfriend Vanessa and mom Denise. A GoFundMe for Jake, accurately designating him a “hometown guitar hero,” raised over $58,000 and a benefit show, slated for April 28 at Hole in the Wall, was assembled.

“It’s been a rough week,” Jordan admits on Thurday. “There was improvement from day one to day two that was pretty major so I was relieved – I was extrapolating ‘OK he’s going to keep getting better.’ then from day two really right up until today or last night he was pretty much the same. He was sleeping all the time – 22 hours a day – he was vomiting every meal. There was no progress being made and no guarantees about what it was gonna look like in the future. We knew he was going to live, but we didn’t know brain-wise what was going to happen. It was a pretty intense injury - he fractured his skull. It would go a lot of ways. It was a pretty hellish week – until just a few moments ago when we got him home.

Yesterday, Ames was discharged. Jordan, Jake’s longtime best friend, was shocked by that development, which occurred while he was at home.

“I was actually pretty furious that they discharged him because he hadn’t had a lot of success keeping food down. I was trying to keep my cool, then I rolled up to his house and he’s himself: rattling off stories and stuff – you get a few people around and then he’s telling jokes. After barely talking to us at all for the last four days and not being able to string sentences together to … pretty much old Jake. Save for the fact that he’ll forget words and his memory’s a little off still. Other than that he’s like 80 percent himself.”

That includes being able to express himself on guitar.

“I’m fiddling around with his guitar for a few minutes and Jake’s like ‘Would you hand me my guitar?’” Jordan recounts. “I was like ‘Yeah, sure man, whatever.’ He’s like ‘Yeah ‘cause I really want to play it.’”

They went outside and Ames sat down and began playing one of his songs. A resulting video, in which Ames is strumming with hospital bracelets still on his wrist, served as the public announcement that his condition had improved and he’d come home. For his many friends, it felt like the dark clouds had parted and sun shone down.

According to his bandmate, doctors have put limitations on what kind of activities Ames can currently do. Among them: he can’t have amplifiers on and he has to be careful with how much light hits his eyes.

The band still has a west coast tour on the books for mid-summer, but before that there’s another concert on the calendar of extra significance: a set at the 50th annual Kerrville Folk Festival. Ames, who grew up in Kerrville and has been going since childhood, met Jordan there. Since 2009, Jordan’s camped all 18 days (or more) ever time the festival has happened.

“We go to it religiously,” says Jordan. “This is our first time playing main stage and we are pumped. I was thinking we were going to have to cancel, but now thinking we might be able to do it.”

Asked how it’ll feel if Good Looks is able to play Kerrville as their return to action, Jordan doesn’t downplay the personal magnitude: “It will be a high moment of our lives for sure.”