Early aughties R&B superstar Ashanti beamed from the stage at the Empire Garage on Tuesday night, but spent just moments on each song, singing what sometimes felt like 30 second snippets of her hits at a late-breaking South by Southwest show. 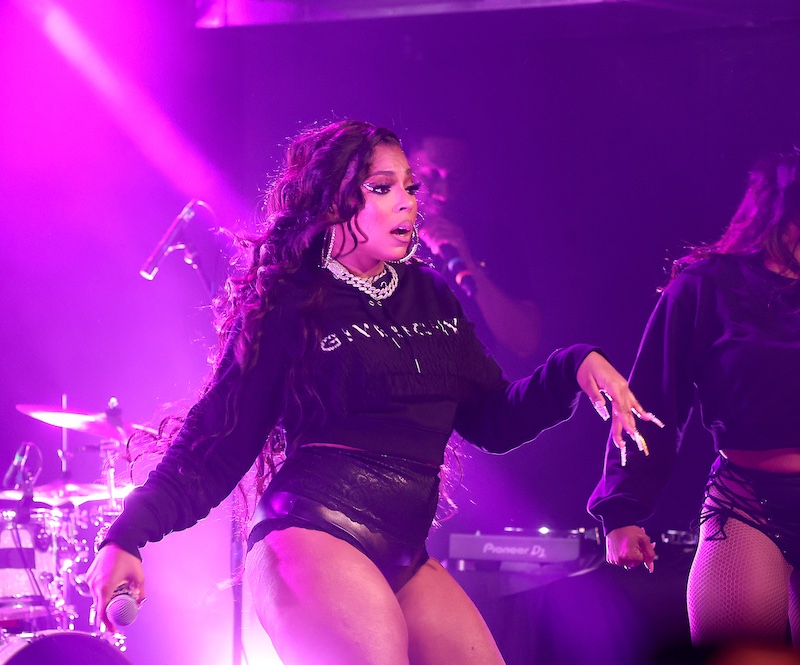 Ashanti airing her nails at Empire Garage for SXSW. (Photo by Gary Miller)

Hasty wasn’t the right word for it, though, and the hype dancers were perfectly timed, down to holding their poses for a minute straight while Ashanti, looking radiant and flattered, worked the crowd – in what turned out to be the most attended performance of SXSW Music’s second night. So why the abbreviated versions of old airwaves staples?

The Long Island songstress’ plans to re-record her eponymous 2002 debut, whose masters are variously reported as hers and still not hers. That Murda Inc. label co-founder Irv Gotti already decried that ownership conflict and move to re-record probably won’t slow Ashanti, whose no-regrets long-game attitude on the importance of artist-owned work will put her in league with other enormously successful performers like Taylor Swift, who also re-recorded early work after thwarted attempts to own the masters. But maybe the pending re-release shaped that sampler-platter performance.

All an energized business mogul, the Grammy-award winning singer reminded the audience of proud accomplishments: a Guinness World Record (Fastest Selling Debut Album), an upcoming star on the Hollywood Walk of Fame, things she can “add to her little stats,” she said, thanking the house, who stuck their phones up to record and allow those of us in the back to see the stage through a hundred tiny screens. Ashanti, singing into a jeweled microphone, ran through “Foolish” and “Happy” from her debut. Hits with Ja Rule like “Mesmerize,” “What’s Love,” and “Always On Time,” were on the menu, as well as “So Into You,” a song Tamia became famous for when Irv Gotti prevented Ashanti from recording a video for her version at the time, according to the singer.

“We all go through the same things,” she said, introducing a vocal powerhouse rendition of her Busta Rhymes collab “The Woman You Love” in which he stretched an a capella high note for over 10 seconds to loud applause. That discourse was about love and relationships, but also stood as an example of the now commonly recognized artist’s struggle to get money made from their own work.