“A soft opening, about as soft as they come” during South by Southwest 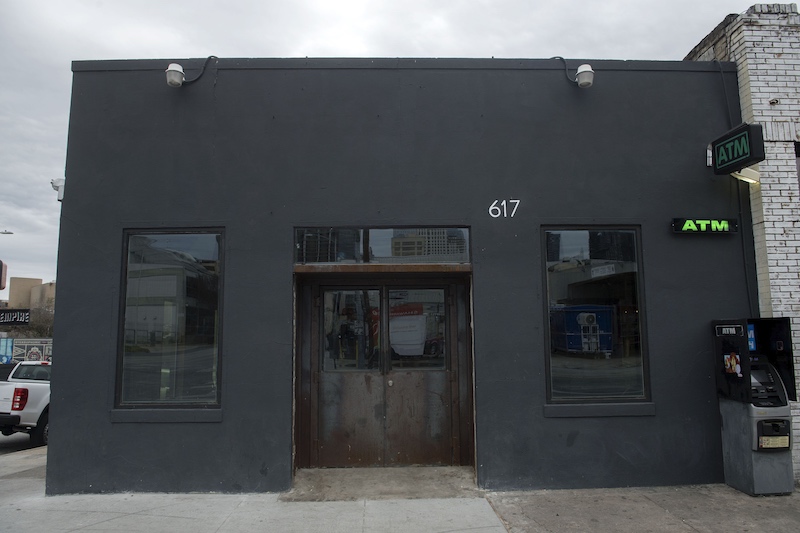 The exterior of Chess Club, still in progress, on Monday. (Photo by John Anderson)

For those closely examining the growing South by Southwest schedule, you may have noticed a new name – Chess Club – at 617 Red River.

Chess Club is a new bar from the team formerly behind Barracuda, including Hotel Vegas’ Jason McNeely and Brian Tweedy, plus Flesh Lights singer/guitarist Max Vandever and Cliff White. Just around the corner, Red River standard Barracuda shuttered in 2020 due to financial difficulties related to the pandemic. Chess Club debuts as an official SXSW venue, hosting daily acts like Faux Real and Laura Lee & the Jettes.

Tweedy only hesitantly confirms the news to the Chronicle, as he considers the festival dates a soft opening before the team establishes a more concrete vision for the space. He loosely plans on a dance club concept, combining bands and DJs. The team has, for months, been overseeing renovations to the former home to Plush.

“This is a soft opening, about as soft as they come,” says Tweedy. “We’re so excited about Chess Club, but we’re just staging it for the festival, and after that, we will reopen up. Then I can talk more about what we’re going to do.

“We’re trying to just throw things together to be South By official. It’s like we did Fun Fun Fun [Fest] parties at Barracuda before Barracuda was ready, same thing.”

The small space previously held a capacity of 105 as Plush, an underground DJ hub on Red River for 20 years. Plush closed in May 2020, when general manager Ryan Cunningham posted: "The combination of ever-rising prices and new regulations has just been too much.” The building is owned by the Sconci family, who have operated Pat's Sheet Metal out of the corner of East Seventh & Red River since 1967.

Prior to Plush, the petite space previously housed LGBTQ Nineties bar the Blue Flamingo, which opened in 1992 to host punk bands like the Chumps, the Motards, and Spoon. Tweedy was one of many underage music fans in attendance at the all-ages spot.

“I used to go to Blue Flamingo when I was 17 and 18, so it’s really cool to be back there – I love it,” he says. “When I was a kid, that was one of the only places young bands could play at. Really good bands could sometimes play at Emo’s or Liberty, but generally, if you were underage, you were playing at VFW halls or people’s houses, except for that spot. You had to bring your own PA.”

“Now that it’s our spot, it’s a lot smaller than I remember when I was kid.”

Tweedy and McNeely – alongside Yellow Jacket Social Club's Amy Mullins and Shannon LeBoeuf and the 13th Floor's Johnny Yaklin – are also in the works to launch a new concept in the former Spider House Cafe space at 2908 Fruth.