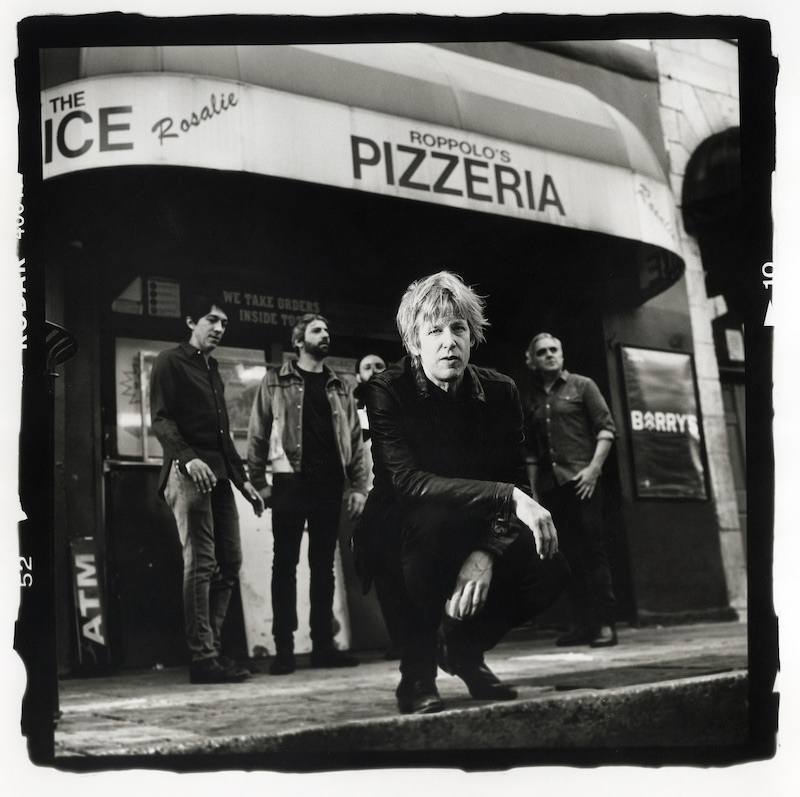 The 2022 Rock & Roll Hall of Fame induction nominees were announced last week. Spoon, which released its debut album, Telephono, way back in 1996, didn’t make the cut.

“If Iron Maiden hasn’t made it in yet, I’m not surprised we haven’t been nominated,” quips frontman Britt Daniel from California, just hours before a one-off concert at Santa Ana’s Observatory. “I think we oughta, but I don’t know the odds.”

Few – if any – indie rock bands have had the impact, longevity, or critical acclaim of Spoon. But you already know their résumé. Spoon’s catalog is woven into the very fabric of modern Austin, soundtracking not just a specific time or place, but entire decades. While we can quibble over the ranking of Spoon’s LPs, the band has released no less than five impeccable records.

Ahead of the release of their latest, Lucifer on the Sofa, out Friday on Matador Records, Daniel discussed his return to Austin, pandemic hobbies, and the need to make a real rock record.

Austin Chronicle: When I was watching Get Back, and listening to that Plastic Ono Band reissue, one of the things I loved was seeing how much they riffed on covers in the studio. It was this common language. We’ve got a down minute. Let’s jam on this. Reading a bit about where the Smog cover on the record comes from, it sounds like it’s similar for Spoon.

Britt Daniel: For sure. When I know I’m going to be working on music, it’s a good way to start moving toward that receptive, feel-good zone you need to get to do music. I learn covers all the time. With “Held,” that is a song we covered a lot in the 2000s, but we never recorded it back then, and we hadn’t played it in years and years. And I hadn’t thought about it, honestly. But one day when we were getting going, we were playing a bunch of covers. And I said 'Let’s play it.' We haven’t done it forever. I moved over to bass guitar. Gerardo [Larios] can play the lead guitar much better than me. Suddenly, we had this thing that maybe wasn’t just an exercise. Maybe we’re going to record this.

AC: Still a bold move to open with a cover. They’re usually buried on the second half of the record, the second-to-last track.

BD: It’s funny, I would’ve never guessed it, but I get asked that in every other interview. It’s clearly something that stands out to people, but I didn’t give it any thought at all. The reason why that song went first is because it has that studio chatter in the beginning and those incidental sounds, these things that happen that aren’t really a part of the song but become part of the recording that you can’t let go of. I love those things. And it just felt like a good way of starting the album and setting the scene. Not only that, but it’s a slow tempo. If you put that on first, then you have a place to build from. You can then go a little bigger and a little bigger. We’re always thinking about things like that when it comes to sequencing.

AC: Let’s backup a minute. You moved back to Austin in late 2019. What finally brought you back?

BD: A lot of it was wanting a change in how we got the record made. With Transference, I made a lot of it totally by myself in Portland because it was the first time I had gear, and I figured out that was kinda a lonely process and not as much fun as making it with the band. The last two records we made largely with Dave Fridmann. And when you work with Dave Fridmann, it means you’re going to him, which means you’re going out into the woods. That’s cool. It’s a great process. But it’s kinda lonely sometimes too. You’re isolated out there. You’re about 20 minutes from the nearest bar and coffee shop.

So the idea was let’s go back to Austin and make a record in a different way, where it’s half real life and half writing time. I had moved back. [Keyboardist/guitarist] Alex [Fischel] had moved from California. That worked great for about four months, where instead of just seeing those five dudes for weeks at a time, we were going out and having some life. We’d go out and see Dale Watson play and then come back and write some music. Or we’d go to a bar and then record. It was a little more fun and fit in with the blueprint for this record, which was that there’s not enough great rock & roll records being made. Let’s do something that’s loose and feels like a band playing together in a room and having a good time. 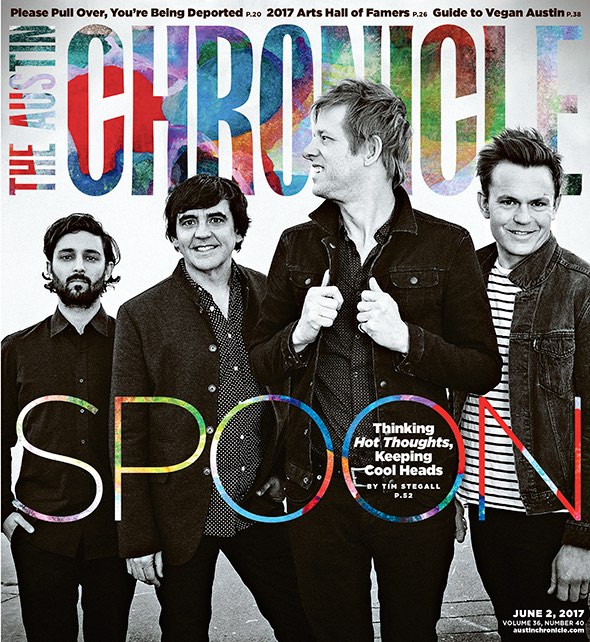 Spoon on the cover of the Chronicle in 2017.

AC: I’m curious about your experience of Austin. What are your go-to spots?

BD: There’s so many, but Hotel Vegas always seems like it’s a good time. White Horse. The Continental Club. We had a really good time at Stay Gold one night. Remember that place? Alex and I went to go see a solo show from Sabrina Ellis [of A Giant Dog and Sweet Spirit] there. It was just a beautiful night. It started at Matt’s El Rancho. Then we went over to Stay Gold. Our friends in White Reaper were in town for a show, and they came by. The night went on and on. And when it was done, when everyone went home, Alex and I went back to my house and we took on this song that we’ve been having trouble with, called “Astral Jacket,” and for the first time – with the mood and spirit of it being the end of the night and the time-to-come-down vibe – the song finally worked for the first time. We had tried it all of these different ways, but I was playing a classical guitar, he was playing a Wurliztizer, and just feeling… end of the night. It worked. And that’s what you hear on the record.

AC: Is this before or after the world shut down?

AC: Spoon is so highly regarded for its consistency. There’s just no fat on the records. How much do you typically write and how much gets left on the floor?

BD: There have been records where we have nothing to spare. I say that, but I counted them all up, and we went through 42 songs on the way to making this record. Some of them we did finish and they’ll probably come out eventually; a lot of them get discarded as you go along because you’re like, “I’ve had it with this one,” or the lyrics aren’t coming or something.

AC: The title track tackles that internal battle that so many went through – and are continuing to battle – in the isolation of the pandemic. How did you work against that Lucifer on the Sofa, as you put it?

BD: The thing that made me feel the most normal was working on a song and getting really lost in it. I have friends who said they couldn’t write during the pandemic or the lockdown phase of it, and they still can’t, or they didn’t want to. But of all the ways to deal with the pandemic, for me, it was the most healthy. I would do it as much as I could.

AC: Did you pick up a pandemic hobby? Any sourdough starters in the mix?

BD:I’ve gotten to where I ride bikes quite a bit, somewhat unexpectedly. I got one of those fold-up for tour. I think four of us in the band got them, and after the first tour, mine was the only one that was still riding on the bus. And I kinda went fold-up bike crazy for a bit. But no sourdough.

AC: Is this the longest you’ve gone without touring?

BD: It might’ve been. I haven’t counted it out. There are times when we’re making a record where off the road quite a bit, but probably not this long. You’re right. It’s probably the longest we’ve ever gone without doing a show.

AC: Is that part of what influenced the live aspect of the record and the more intensive rehearsals.

BD: I think we decided that way back in the summer of 2019, when we had a good flow of where our show was at and how we were playing together. That was addressed. This is what the record should be about. It shouldn’t be as produced as the last one. It should be about the way that this band plays together.

AC: Are you excited to be back on the road?

BD: I am. We did a little bit of touring in September and October, and I was warned it would not be fun. It was actually just as fun. All of the essential elements – a lot of people cramming together and having a shared experience with really loud music – that’s probably the most important part of the deal, right? And that was still there.

AC: I’m missing it. Dearly. I’m hoping to get back out there soon. It feels like something that’s lacking in my life. 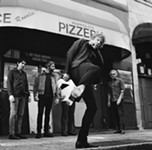 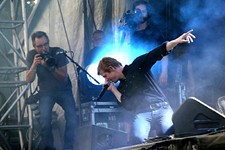