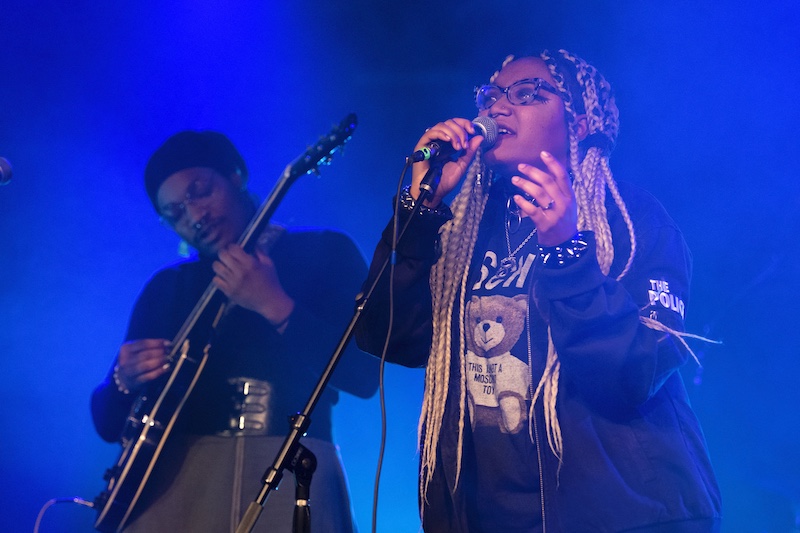 Chase (left) and Max Mitchell (right) of We Don't Ride Llamas at Empire on Friday. (Photo by John Anderson)

The first time I laid eyes on We Don’t Ride Llamas was via an Instagram clip of the siblings in their practice room playing a faithful and unironic cover of the breakdown from Korn’s “Freak on a Leash.” You know, the part that goes “Da-boom-dah-dah-umm-nah-nah-eemah.”

Weird choice, but not altogether surprising. For the last couple years, we’ve begun to see Gen Z bands to embrace stylistic and aesthetic aspects of nu-metal — a musical category that to me, an Eighties-born millennial, once wafted of soulless Line 6 distortion tone, spiking testosterone, and coastal white men rapping over heavy music (see Limp Bizkit and Crazy Town). A more diverse and gender-eschewing field of younger artists, who didn’t experience the tribalism of being into stringently underground scenes at a time when that genre held a highly commercial reign, seem hospitable to elements of nu-metal in their self expression, both in the fertile soil of Y2K-era nostalgia and as an ingredient in their increasingly panoptical vision of heavy music.

But as they emerge in two-inch platform boots and pyramid spiked accessories on Friday at Empire Garage, We Don’t Ride Llamas at first sound like a punk band. The four sibs, ranging from high-school aged to mid-twenties, led out with their debut single “The Flies” – a war-chant against insects with a mighty and instantly memorable hook: “The flies, the flies, we’re gonna kill the flies!” During the song’s slinky, melodically descending, R&B-ish middle-eight, a smoother facet of Max Mitchell’s vocal talents gets a chance to take hold. From behind, drummer Blake’s smile comes through the flashing stage lights infectiously.

So it’s hard for everyone not to smile along, but there’s scant bodies in the open air Downtown venue. Understandable: it’s 7:30pm – shortly after doors opened for the Free Week showcase – compounded with a very un-Texas-like cold front and this pandemic spike. A good portion of the small crowd are industry, evidence of a national buzz the foursome has built over the last four months that include an appearance at Chicago’s Riot Fest and touring as direct support on Willow Smith’s Life tour. 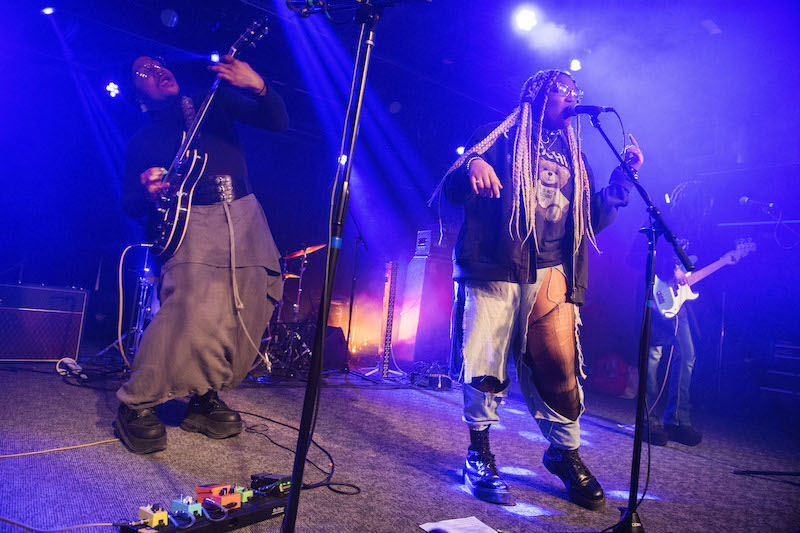 A couple songs into a set largely comprised of material from a yet-to-be-released EP titled Oracle, WDRL’s creative guitarist, Chase, upends a mid-tempo rock cut with a lengthy, skyward solo that, as the last piercing note rings out, elicits a loud applause. Standing up front, I turn around to see the crowd’s grown considerably.

The Austin-based group with southern California roots, who’ve described their style as Afro rock, at times sound raging and in others delightfully funky, but the rhythm section — rounded out by bassist and youngest member Kit – bring an inherent heaviness. The material’s solid too: aside from “Flies,” the standout song came late with the Blake-sung “Blueberries,” which peaked with a 7th-chord oriented breakdown in which the four filled the mix with big, round vocal harmonies that made you wonder if they’d all sung in choir.

Saving their metal moment for the very end, Chase chugs a chunky power-chord rhythm and the band piles on, jacking up the intensity with every bar until Max is outright shrieking, long black-and-white braids bouncing in step with knees protruding from extraordinary ripped, baggy jeans. Even at their most vicious, there’s a joyfulness exuding from this supremely lovable band.

Friends and Family of the Original Owner of the Armadillo Sign Being Auctioned at Sotheby's Say Sign Was Purchased, Not Stolen, Despite Claims of Armadillo Associates
Bidding underway for piece of Dillo history