In the Frigid Cold of a Surging Pandemic, Tear Dungeon’s Blood-Spewing Chaos Made Us Feel Alive

Finally, a band that wears masks on stage – oh wait

Q: What’s black and white and red all over?
A: Not a fucking newspaper, ya dummy.

No, the most accurate answer is Tear Dungeon during Thursday’s Free Week show at Hotel Vegas – and every other night they play live. 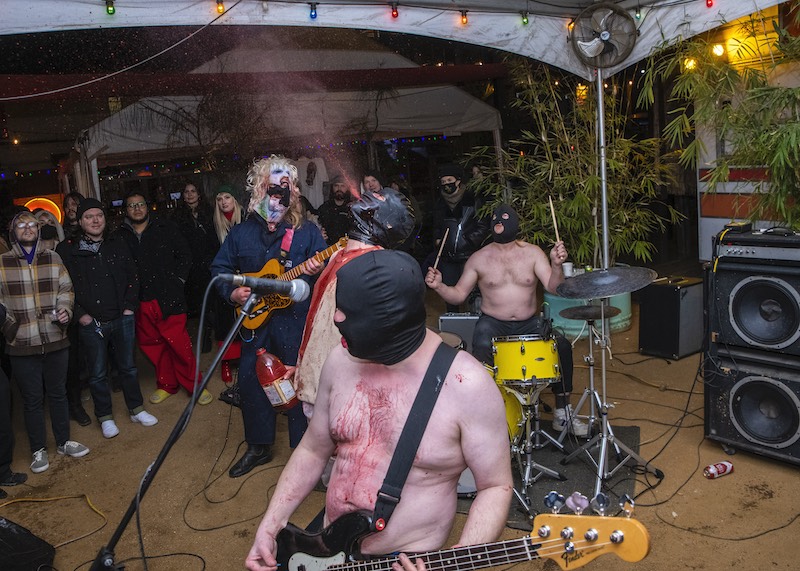 Normally, each member of the quintet, who all hail from popular local acts Sweet Spirit and A Giant Dog, sports a solid-white outfit topped off with intimidating black gimp mask. You know that guy chained up in the back of the pawnshop in Pulp Fiction? Yeah, like that.

For this show, everyone wore their masks (riddle me this: how many bands can you say that about?), but frontman Andrew Cashen was the only one who arrived in all white. As for the red? That came several notes into the opening song when he raised a Lone Star tallboy full of fake blood and poured it all over his face and down his gullet before releasing a geyser of the residuals high into the air to sully his once-pristine pants and sweater.

Now you’re probably thinking, “What the actual fuck?,” but this is Tear Dungeon’s standard live show, a visual lesson in brutality which mirrors their sonic style, a slew of unsuspectingly catchy riffs shrouded in maddening, max-volume metal and mordant lyrics. The schtick was actually toned-down a notch this time in the spirit of relative COVID-consciousness — Cashen limiting his blood-sprays-to-the-face to his bandmates, sparing audience members the fountains of crimson typically directed at them.

Yeah, you could argue that these are reckless antics, but that would be ignoring the reality that anytime you stand in the front ranks at a live show, you’re breathing in possibly hazardous particles — pretty much everyone spits a little bit when they sing, you just can’t always see it if it’s not dyed red. Besides, this band’s fans know what they’re getting into and its possible peril — even going to the grocery store these days is a calculated risk of varying proportions, depending on who you’re talking to. And for anyone who didn’t get advance notice, there was plenty of open space for proper social distancing in Vegas’s sprawling backyard. 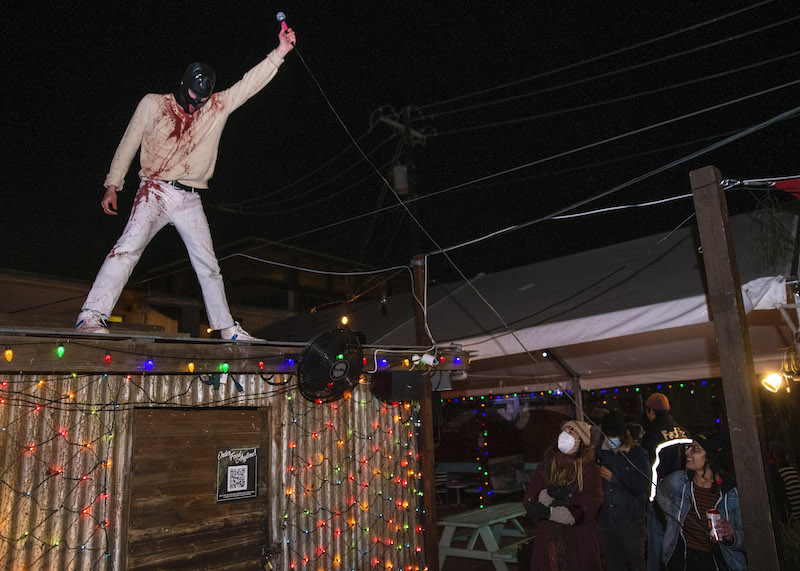 After jumping down and finishing the song atop a picnic table, he returned to douse guitarist Joshua Merry (double-masked in some sort of terrifying animal head pulled over the gimp guise), then tore into anti-police anthem “If I Was a Cop.” I don’t know if it was the fault of the sloppy fan up front who sloshed her entire drink onto the front-stage monitors, or just the show’s sheer volume, but midway through, the sound cut out completely. After several minutes of tension – during which drummer Daniel Blanchard kept the beat going as a triumphant and unexpected soloist – the noise bellowed back tenfold, jolting the audience into a maelstrom of moshing.

While Graham Low – astonishingly shirtless in a 38-degree chill – pulverized his bass, Cashen wasted no time in renewing himself with a fresh coat of phony blood (ceremoniously sharing it with guitarist Jon Fichter’s crotch) to rage through “Banananana,” then resumed roaming the tabletops for super shredders “Pizza in a Can” and “Love Fighter.”

The show concluded with the frenzied frontman standing atop a bar, belting out anarchist ode “Give it a Weak.” The chorus: “Watch it all burn to the ground / watch it all burn” felt like a fitting sentiment to represent the frustrations of living through these tumultuous times. Everything feels pretty fucked up right now, so — as suggested by the slap-happy smiles plastered across fans’ faces as the show ended — there just might be some tangible value in chaotic catharsis. 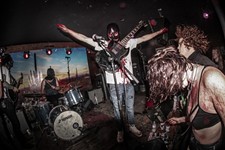