A Community Commences as Skylark Lounge, Closed Since the Pandemic Hit, Finally Reopens The marquee of Skylark Lounge on Monday morning. (Photo by Kevin Curtin)

It wasn’t an inevitability for any music club to reopen after pandemic closure. So for Skylark Lounge, which has remained shuttered for the longest of any favored Austin music haunts – 599 days to be exact – this weekend’s return to action felt especially exultant.

“The Skylark is back!” shouted Soul Man Sam to loud cheers on Sunday night, a declaration followed by lots of dancing, smiles, and regulars hugging and cheers’ing drinks.

The Airport Road hole-in-the-wall emanated with gratitude throughout the weekend, during which Soul Man Sam – a septuagenarian vocalist who’s long been a resident at Skylark with his SMS Band – performed all three nights. Harmonica-blowing blues wild man Birdlegg, saxophonist Paul Klemperer, and TT Brown and the Soul Expressions also played the grand reopening weekend – along with lots of sit-ins including UK transplanted piano phenom Henri Herbert.

On Friday, Johnny LaTouf, who co-owns the Skylark with his ex-wife Mary, delivered an impassioned speech, in which he spoke about why it was important for the venue to persevere:

All of us were in that room for the same reason: because we feel connected to what live music is locally and what it means to that neighborhood and to our musicians – Skylark Lounge co-owner Johnny LaTouf

“To keep it alive for these musicians and the people in this neighborhood and for us to be able to deliver this music and this feeling of what it is to be part of our community. Because these bars all across country have fallen on hard times and are going out of business and I’ll be goddamned if I’m going to let yours go out of business,” he said. “I’ll fight every day of my life if I’ve got to work three jobs to let this be the place that you come to. If I have to put my kids in here and I have to put my brother in here then we’re going to do whatever it takes to keep it going. We’re gonna do it. We’re going to do our best for you because you deserve it. You’ve supported us so long and been a part of our lives for so long, when I see you here, it just makes my heart explode.”

During a Monday morning phone call, the Chronicle asked LaTouf what emotions he was feeling when he spoke on Friday night.

“I’m just feeling that the people had come back in and remembered us and the people who’d always supported us throughout the years were there in spades with us to be in the club and to show what’s important about what a place like ours means to the community,” explained LaTouf, an Austin native and longtime Eastside business owner who opened Skylark a decade back. “We’re not downtown, we’re not one of the biggest spaces, we’re just built around the local community and music. That opening night was important for us and for our musicians, because most of our musicians are wed to us singularly and aren’t playing very many other places. For everyone to come back in and support them with their tips and their money and their applause – it was overwhelming. The Skylark isn’t a money-making venture for me and it hasn’t been for all ten years. I fund it by working extra hard in the day. So all of us were in that room for the same reason: because we feel connected to what live music is locally and what it means to that neighborhood and to our musicians.” 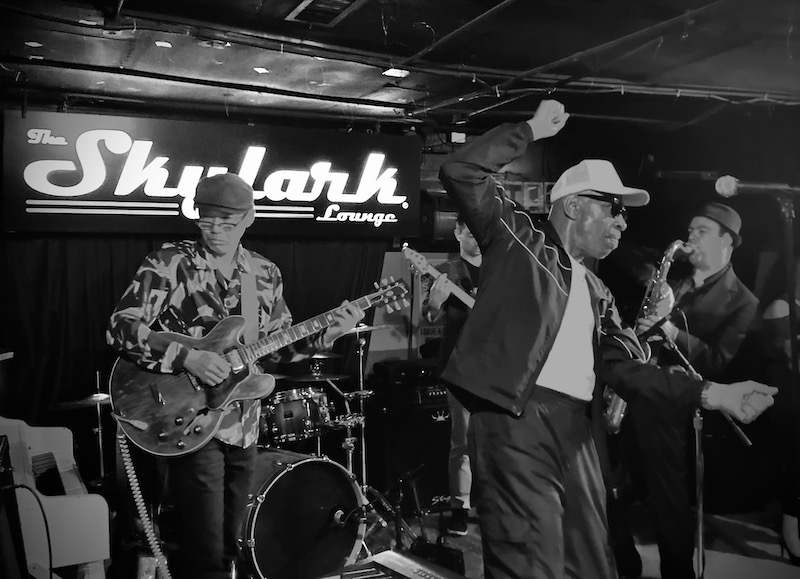 LaTouf also spoke about why he’d kept the business closed for so much longer than most Austin nightlife establishments in the curve of the ongoing pandemic.

“First of all, I went to the owners of the property, who’d originally owned the Airport Bar & Grill [in that same space] and told them ‘Listen, I don’t know which way this is going to go, but I’ll stand good as a person, whether I reopen or not, for all the money I owe in rent. One way or another I’ll pay it – and it might take me years – but whatever it is, I’ll pay it’ and they agreed,” he said, noting that he received $24,000 in city funding and has racked up between $100,000-$120,000 in debt for expenses including building insurance and utilities. “But in the question of opening it up in a later date, I had to be sure that for my patrons and the older musicians who played for us, that I wasn’t going to be driven by a profit motive, but looking out for them. I also wanted to make sure that when we opened it back up, we were open back up for good – it wasn’t going to go back and forth. Even reopening, it was quite a bit of money just to restart the engines, almost like opening up a new place: we had to order new liquor, all the beer had gone bad, the heater had gone out, one of the air conditioners wasn’t working. The place was eighteen months of being closed.

LaTouf said he had ample time for self-reflection over the last year and a half and realized that it would be easy to walk way from the business if it were driven by money, but since it’s driven by a community and its musicians – walking away was almost impossible.

For him, the hardest moment of the pandemic was when Margaret Wright – the brilliant Austin Music Awards Hall of Fame pianist and human songbook who served as Skylark’s singular resident performer – passed away at age 78 last December.

“When I first opened Skylark, I went and got Margaret Wright, a true icon and treasure of this city. She was like a mother to me and she helped guide me in the business. When she passed away in the middle of COVID, it was devastating to me. I went up there and the place had been closed and I sat down at her piano and just said some words to her – thanking her for everything she’d done for us,” he revealed, tearfully. “I really questioned, without her, did I want to go on? I had to think about what it would be like to go on without her because she was a main component to who we were and who I am and her love and guidance over the last ten years is irreplaceable – it’s like losing a partner. But she would have wanted it to continue. So part of Skylark going forward is it being a memorial and tribute to who she was.”

Skylark Lounge will be open Friday, Saturday, and Sunday in the immediate future, then will likely expand to include Mondays and Thursdays, LaTouf anticipated.