Strutting in with white platform boots, knee-high socks, beret, and pearl fishnet gloves, Yves Tumor and Its Band radiates a mystical bravado akin to a rock star of leather and lace, smoke plumes, and plush vice.

In fitting fashion, the horn maelstrom of “Gospel for a New Century” rips through the speakers at a sold out show at the Mohawk, serving as the hellish procession for the anarchic, gender-bending provocateur. 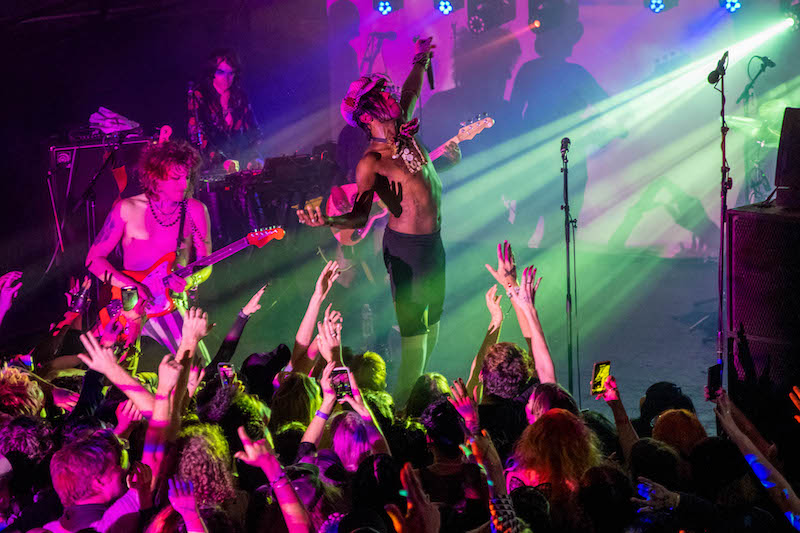 Yves Tumor and Its Band performing at Mohawk for Levitation 2021. (Photo by David Brendan Hall)

In that sense, Yves Tumor and their opener, Ecco2k fit the psychedelic spirit of serving the middle finger to binaries and boundaries by warping villainous oddities. While the latter murks through hazy gossamer raps and tinnitus 808 beats, the former assumes the mark of the beast as they deliver cuts from night terror Heaven to a Tortured Mind (2020).

Twofer “Romanticist” and “Dream Palette,” swells the brain like a disorienting fever dream. Just as serpentine bass and slinky guitars settle to what seems like an ethereal hypnosis, idiosyncratic drum fills spiral out into a multi-limbed Frankenstein of fathomless pit wails and zig-zagged six-string sequences. Glam-rock astral heartbreaker “Jackie” spews battery-acid distortion and lush reverb all in one while sexy pomp “Crushed Velvet” prowls in an inebriated stupor.

Standout performance “Kerosene” revs to a maximalist odyssey. Fighting through squawking feedback, the artist otherwise known as Sean Bowie’s voice morphs from aching howls to rasped sweet nothings. The quintessential performer, Tumor exudes Prince’s androgyny flare, D’Angelo’s tender masculinity, Iggy Pop’s freakazoid mania, and Grace Jones’ magnetic mystique. Meanwhile, shirtless guitarist Chris Greatti manifests Eighties hair metal majesty as he sports blonde tousled curls and skin-tight leggings with a dimed Marshall half-stack perched behind him. As the solo kicks in, his cherry red guitar merges to an extension of himself as his fingers crawl up and down the fretboard like ants in a sun scorched frenzy.

Tracks from the 2018 album Safe in the Hands of Love, “Licking an Orchid” and “Lifetime,” glean of tactile intimacy before burning into white-hot meteorites of scathing solos and violent dissonance. The last minutes blows hair back in off the rails closer of “Noid” and “Secrecy is Incredibly Important to Both of Them.” The former’s political bent vexes with gnarled teeth and a communal primal scream of “911, 911, 911, Can’t trust them,” as the latter thrashes the crowd with post punk reverie. 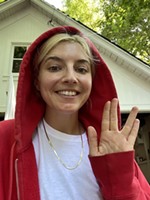