Watch This: The Lonesome Heroes Vamp Out in “Cloak and Dagger”

Halloween descends upon us this weekend, and to help get us in the mood, The Lonesome Heroes delve into the dark shadows with the video for their new song “Cloak and Dagger.” The cameo-laden production, premiering below, plays out like “Thriller” crossed with “Slacker.” 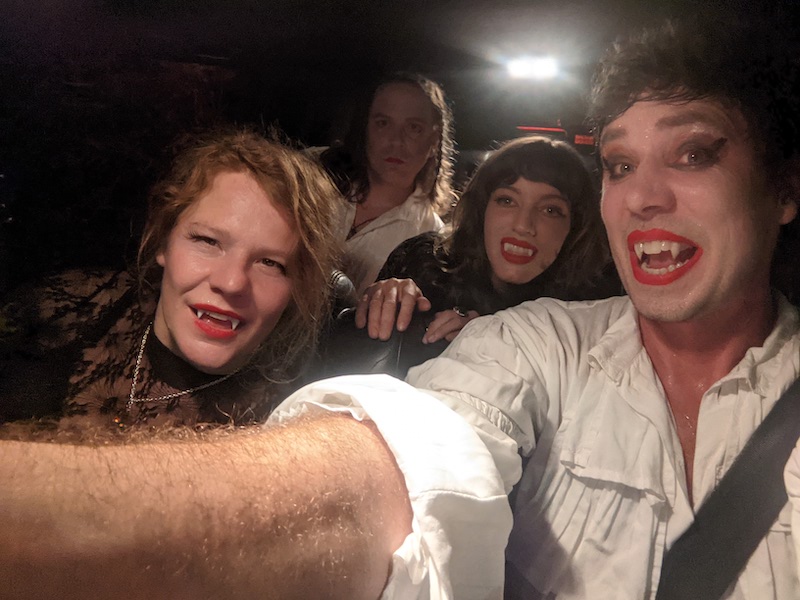 In retrospect, we probably should have expected this when we gave head Hero (and faithful Chronicle rack filler) Rich Russell access to the Austin Chronicle’s warehouse. And we’re still checking with legal if this violates our restraining order against Wild Bill Ogden, who stars here as the unwitting, skateboarding every-Austinite stumbling upon a vampire-turned Russell ready for a night on the town with his band.

Everything inevitably gets out of hand as the vamping quintet gets swarmed by their own blood-thirsty fans. Credit for the impressive production goes to director Mike Vanata, who runs the amazing YouYube channel of original recorded performances, Western AF.

Among the other Austin artists haunting the video, we spot musical mainstay Jeff Johnston, Lost Knobs’ Amanda Ogden and Pete Gray, and Devin Jake. Go Fever’s Acey Monaro also gets credit for doing the makeup and somehow convincing the band to trade in their pearl snaps for flowing Victorian shirts.

Although the constantly road-running Lonesome Heroes have had to lay low the past year, the band’s new lineup packs in the talent, featuring Sweet Gary Newcomb on guitar and Georgia Parker on bass, with Emily Underwood’s keys and Ben Gallaway’s drums. “Cloak and Dagger” likewise unveils a deliciously more upbeat and pop sound from the longtime psych-Americana outfit.

The band is finally getting their touring van back on the road, but will land back in Austin at their old stomping grounds The Hole in the Wall on December 3rd. We assume the fangs will have receded by that point, but we’d still recommend not touching the shots of whatever vials they’re passing around.

Check out the special Halloween video premier for “Cloak and Dagger” below!

Don't Look Back
The Lonesome Heroes rewrite the rules of alt.country, Wednesday nights at the Hole in the Wall