A vibrant soundtrack to life coming back

I felt my life come back to me this weekend and last at ACL Fest.

Plague-induced out-of-body experience ongoing, Austin snapped back into place at its very heart over six glorious afternoons. The first Friday weather delay meant a rocky start for most, but precipitation ended even before gate time and that proved to be the weather gods checking off on their cosmic permit. Temperatures remained relatively mild throughout (80s and low 90s) despite a megadose of vitamin D followed by thunderstorms hours after the 2021 embed ended.

On this very same Sabbath, when a cloud canopy provided miraculous shade for one and all – 28 minutes after sunset and directly prior to headliners Duran Duran and Tyler the Creator – the crown prince of a New Orleans musical dynasty uplifted the secular into the divine. 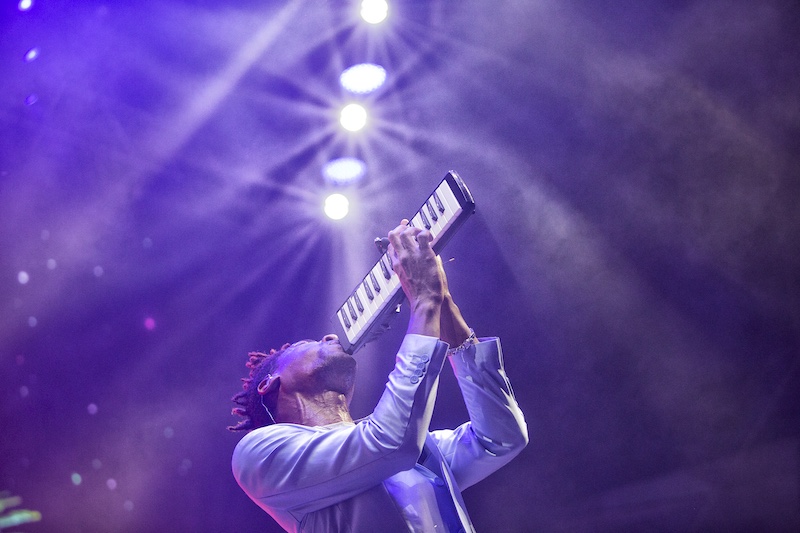 Leading a 10-piece revue off the sound stage of some sci-fi Fifties musical (thank the outer space backdrop behind the band), Jon Batiste took Black expression out of the church and into the future. Gospel, blues, and soul ran neck and neck with hip-hop, rap, and pop as the grinning ringmaster in his powder silver-blue blazer, matching shorts, and sequined cowboy hat rode it to festival ecstasy for 59 minutes. You don’t lead a late-night TV show band such as Stephen Colbert’s without professional time management skills.

Hitting all the highlights off January’s We Are, Batiste began at the titular opening anthem, a hymn in waiting a la Marley and Wonder, as if strutting onto Congo Square at NOLA’s Jazz & Heritage Festival. Three winged back-up singers chorused the inclusionary affirmation so that the spirit rose like the crescent moon stage left. “WHATCHUTALKINBOUT” contrasted in follow-up behind a machine gun delivery from Batiste, guitar histrionics, and a Sly Stone fervor.

“Cry” flexed his falsetto and melodica soloing skills, a slow soul burn setting up “It’s All Right” from animated calling card Soul, which did the work of radio and TV combined in converting followers to the church of Batiste. A cover snippet of “Lean On Me” at the piano, bendy man moves on elastic R&B blower “I Need You,” and Civil Rights flashback “Freedom” all poured their sacraments into final 10-minute testament “Tell the Truth,” an Al Green-like howler that drove parishioners’ hands in the air and their feet off the ground.

Austin’s back, friends. Our wellspring still runneth over. Jon Batiste walked, ran, and busted a move on it damn straight.