The Most Memorable Moments of Friday’s ACL Fest The first day of ACL Fest in two years, though truncated due to rain, packed in a ton of action: Here are the favorite moments witnessed by the Austin Chronicle music writers on site.

While successfully allowing the park time to dry out, the festival’s delayed 3pm opening unfortunately forced all fans to arrive at peak entry time. Around 4pm on Friday, a line of abiding citizens – who are probably going to heaven, but I’m not sure ever made it to the fest – stretched back beyond the JuiceLand on Barton Springs Road. I cut ahead with the majority over the bridge, where I still spent 45 minutes locked up ahead of the gates. I saw one bold individual fanning themselves with their vaccine card. Lines also plagued many attendees’ exit at the end of the night, as the festival sent an 8:15pm update warning of “longer than expected wait times” for shuttles from the park. The fest encouraged fans to head out via the Hike & Bike Trail, rideshare, or Cap Metro buses from Lamar. – Rachel Rascoe With Billie Eilish and Miley Cyrus watching from the wings, all three women leading this year’s ACL Fest lineup were in attendance at Megan Thee Stallion’s sunset set. Despite the notable audience, the mellow Houston native launched into opening “Realer” without ceremony – as if two years ago she hadn’t broken hot girls’ hearts with a no-show on the Miller Lite stage. From her rightful helm on the main stage, the Texas icon knew just what to say. “Where my college girls at?” won among the university crowd, and a deadpan “y’all are nasty” hit with comedic timing after essential Cardi B collab “WAP.” She lovingly hand-picked crowd members to dance onstage, and the always-gregarious Cyrus couldn’t help but join in ahead of her own headline. After instructing fans to raise middle fingers, the rapper’s very best line was seemingly directed at Texas politicians: “It’s a big fuck you … to all these hoe-ass men trying to tell us what the fuck to do with our bodies.” – Rachel Rascoe “Does it feel like the party’s getting started?” Tkay Maidza polled the youthful crowd around the T-Mobile stage on Friday, who responded in a loud, wild affirmative. “Exactly.” The Zimbabwe-born, Australia-raised, now U.S.-based rapper and singer giggled frequently between songs during her ACL Fest debut. The audience felt equally giddy, having just gotten into the park after rain-postponed gates and a mob-scene entry line. Backed by a live rhythm section, the 25-year-old performer capitalized on everyone’s desire to let loose with a remarkably feel-good set that hinged on hip-hop, Y2K-era R&B, and a bit of house music. Best cut that emerged? 2021 single “Syrup” where she relates “I just wanna be rich, thick, sweet, sick.” She also took time to compliment two excited fans in chicken suits, led a somewhat puzzling chant of “Whoomp (there it is),” and covered the Pixies’ “Where Is My Mind?,” which – strangely – headliner Miley Cyrus would also cover three hours later. – Kevin Curtin

Your favorite Disney princess is now a rock goddess.

“We’ve all connected more by being disconnected over the last year,” Miley Cyrus warmly states four songs into her Friday night ACL Honda stage headliner set. “I’m sure some of us grew up together.”

Zipped up in a Plastic Hearts pink lady of the line romper, paired with matching knee-high stilettos and drenched in diamonds, the childhood star sang to her fandom with charismatic ease, as if just casually chatting over a heavily packed bowl … of whatever. Reminding them she no longer unpins the blonde when offstage, the singer boastes her new rigid rock style with every hot hit she shouts.

Pulling from icons like Blondie, Janis Joplin, and Cher, the Malibu Barbie lets her voice do the work, belting out cascading scaled riffs and elongated vibratos emphasizing her maturity and new wave of bad bitch electricity from a Disney princess.

And boy does the crowd eat it up. Thousands of sardines throw their bodies up and down with every guitar strike in Bangerz-era “Love, Money, Party” while lighters fly high for early years’ “The Climb.” The rock star struts around and, of course, shakes ass. Excelsior! – Morgan-Taylor Thomas Early Friday afternoon, Machine Gun Kelly stood atop a 15-ft.-high pink and white circular bandstand and made the pronouncement: “It’s muddy as fuck out there. Let’s shake up the ground!” before ripping the cord into his millennial-minded re-creation of late-Nineties-pop punk. All the way across the park, Joy Oladokun offered more casual and profound song introductions. For standout “Jordan,” she discussed being a lesbian who grew up in the church. “When I decided I was going to come out of the closet, I wrote this song and it was a real moment of clarity for me that I don’t think God gives a fuck who you kiss, but I think he cares how you treat them.” The Arizona-raised singer-songwriter, whose style encompasses folk, R&B, and rock, won over the crowd with a conversational, almost coffeehouse performance vibe, where her rich voice and poignant lyrics connected beautifully, warmly, sincerely. – Kevin Curtin Golden hour gleaming and Zilker Park filling up, Black Pumas’ homecoming felt wonderfully serene compared to the intensity of their five-night run at Stubb’s in May. Their set peaked with National Anthem replacement candidate “Colors.” Toward the song’s end, they broke it down to a handclapped sing-along where a spaced out sea of festers sang every word. The second time around, after the line “My sisters and my brothers/ See ’em like no other”, Eric Burton swung his arm up to signal stoppage then took the last bit of the refrain in free time: “All my favorite colors.” A feeling of unity abounded. – Kevin Curtin I got pretty overwhelmed heading back to my first now-times music festival. I found myself in a hot field, scarfing a hot free taco, and thought, How did I do this before? Then Moses Sumney came out, draped in a gorgeous one-shoulder black outfit, backed by a fivepiece orchestral/rock ensemble, baring his soul to the blaring sun with contemporary choreographic movements – and made me feel like I could do anything. Between selections from 2020 magnum opus græ on two side-by-side mics, one for vocoder effects, the artist descended to sit on the stage’s edge for “Quarrel” from 2017’s Aromanticism. He warned: “Is it alright if we make you dance before we make you cry? We can do both.” – Rachel Rascoe

Chet Faker Wins Them Over Back from the dead in denim overalls, Chet Faker ruled a horde 1,000 strong with little more than his soulful, jazzy, vulnerable crooning over a synth and keyboard. A fat kick and thick bass will really tie the room together, though, and the revitalized Australian sat alone onstage at his keyboard with no use for spectacular production elements like the fog cannons or sparkly fireworks at the Honda stage on Friday. Thus returned Chet Faker, with quiet confidence. Nick Murphy created the C.F. moniker around 2011 and laid it to rest in 2016 until his new song “Low” and subsequent album Hotel Surrender emerged like a resurrection last year. Murphy’s farmer-adjacent fit made him seem a humble man with major powers as the crowd started to sway with body rhythms in sync to his tunes. The hits came out: “Gold,” “Drop the Game.” He started to lose the crowd a bit with new music toward the end but won over a number of those who had never heard of the man before. “I love Chet,” said one such new initiate. – Christina Garcia 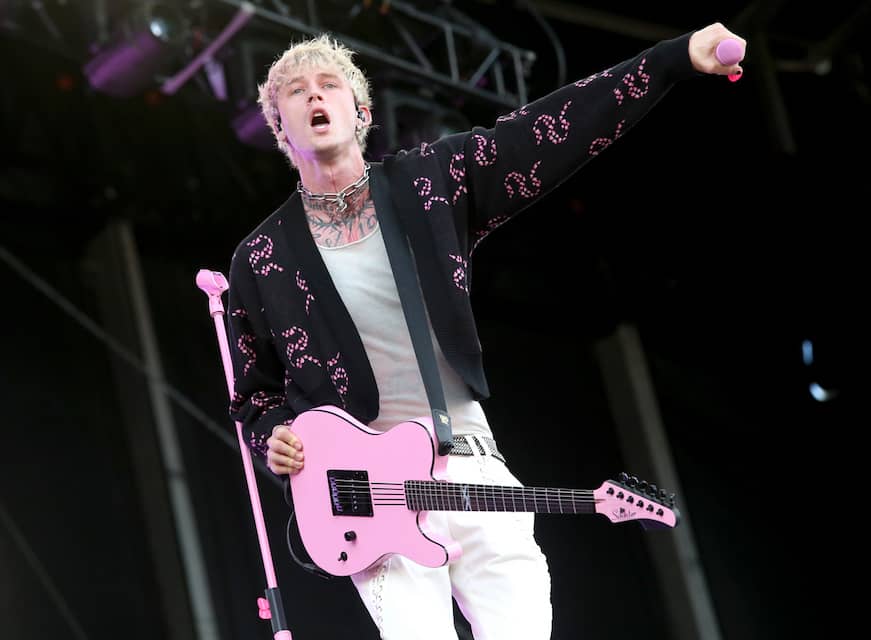 Friday’s delayed opening due to overnight rain hit the local-loving fest where it hurts: the early time slots historically granted as platforms to rising Austin acts. With all performances slotted prior to 3pm canceled, the reschedule washed away the annual tradition of a performance by Asleep at the Wheel, alongside weekend-one-only Austinites Darkbird, Primo the Alien, and Nané. The latter posted a darkly funny clip in the van post-axe: “At least we have this beautiful film team here to capture our sadness. I want to remember this in 4K.” Primo posted: “I sobbed. Now, I’m drinking a beer and chilling.” – Rachel Rascoe

Shaded by the grace of God and stage positioning, Zella Day commanded the relatively diminutive BMI stage with big star chops and versatility. Energetically dripping enthusiasm and emotion, the Los Angeles singer-songwriter threw down a set of many colors to the 300-400 taco chomping (me), glitter hair spraying (not me), white combat boot clad (not me) festers on Friday. She was disco, she was funky, she was pop and rock & roll. She was a woozy, boozy soul in a superhero minidress and a five-person band looking far into the distance where bigger crowds live in some future universe for the musician. “Hypnotic” fans from 2014 got the works from this young artist, who ended with her version of “You Sexy Thing,” affirming belief in miracles. – Christina Garcia When George Strait entered the stage to “Deep in the Heart of Texas,” everyone in earshot, young and old – even those in far off areas of the park – resounded in the clap-clap-clap-clap sing-along salute. It’s instinct, it’s heritage, it’s a well-known bylaw of living in the Lone Star State. King George’s ACL coronation proved multigenerational and familial, with mothers and sons and fathers and daughters – some in cowboy hats, some in light-up festival jewelry – together singing classics like “Amarillo by Morning” and even one commercial “Codigo” – a jingle-single advertising Strait’s tequila company (yes, I actually witnessed many people singing along to it). Alas, the most unified moment came in the minutes after Miley Cyrus’ performance ended, when thousands of young spectators rushed across the field to catch the perfectly timed and perfectly Texas-centric encore: “All My Ex's Live in Texas,” “Take Me to Texas,” followed by a country cover of Tom Petty’s “You Wreck Me” and fitting closer “The Cowboy Rides Away.” – Kevin Curtin