ACL Fest's a homecoming for the Austin-based guitarist 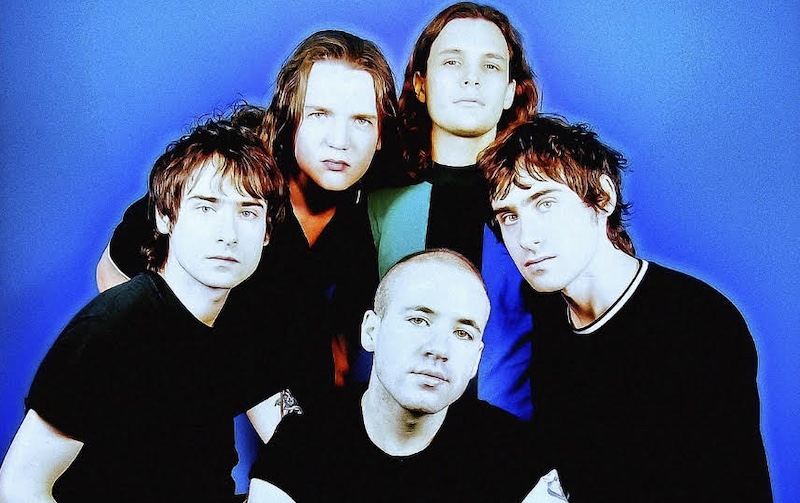 A recent White Reaper publicity photo with Hunter Thompson at the top right.

On a small stage at ACL Fest 2017, White Reaper brought something none of the 100-or-so other festival acts possessed: punk energy. Ripping through an hourlong set, throughout which keyboardist Ryan Hater wilded out with contagious enthusiasm, the Kentucky quintet elicited rare Zilker Park moshing.

A refreshing dose of fast, catchy rock and roll.

Four years and three ACL’s later, they stand as one of less than a dozen acts on the entire lineup that could even be considered rock bands. Now on Elektra Records and playing big stages, they continue to bring vitality to that populist genre. After a sold-out show in late September gig at Music Hall of Williamsburg, White Reaper guitarist and co-songwriter Hunter Thompson phoned in to the Chronicle in advance of an ACL performance that, for him, doubles as a homecoming.

Austin Chronicle: White Reaper is a Kentucky band, but you’re from Austin. How did you end up in the group?

Hunter Thompson: My freshman year of college, 2012, I started playing in bands immediately – just an incestuous group of friends playing in each other’s bands. Through that scene, we were on a local tape label and one of the guys who was running it was from Louisville and knew the White Reaper guys. Maybe before they even released their first EP, it got sent to me and I was just into right from the jump. Whenever they came to town, they stayed at a band I was in’s house. I didn’t actually live at the house, but all the other guy’s did, and they crashed there.

So I was just hanging out with them a bunch and I went to see them because I was into their EP and saw them at Maggie Mae’s. Nobody was there and I was just blown away, like ‘Oh man, they’re so much better than all the bands I’m in and so much tighter!’ So I was into the music and, also, just hit it off with the guys. We all have similar senses of humor and similar backgrounds. So they became friends and they were playing co-op shows with my bands and the next year, at South by Southwest, they needed a place to stay so I let them crash at my place and was tagging along with them at all the shows that they were playing and we had a good time. Hanging about my living room, there’d be acoustic guitars laying around and [White Reaper singer/guitarist] Tony [Esposito] would pick one up and I’d pick one up and we’d just play together. We knew all the same fuckin’ Third Eye Blind songs or Weezer songs that we were joking around playing, but we really tracked together and played with the same style. By the time they were leaving, they asked me if I wanted to join and throw away everything else and see what was what.

So yeah, it was a SXSW thing.

AC: And really a lesson that you should always let a band stay at your house, which sounds insane, but it’s so appreciated.

HT: It really is. Well… I’ve had both ends of experiences. I’ve joined great bands and I’ve also had my carpet shit on. So you never know.

AC: I’ve heard so much evolution in White Reaper. When the first record came out I thought it sounded like Jay Reatard, which I loved, but the band has grown into such a more dynamic presence since then. What have been your observations in that regard as a fan and then a member of the group?

HT: It’s definitely gradual. When you’re doing it, you’re not making a concerted effort to be a certain way – at least we’re not. It’s a natural progression. I think for Tony [Esposito], who’s the primary songwriter, those first batch of songs were kind of that fast punky stuff and the garage scene was really happening, so it was kind of contemporary to all that. Definitely Jay Reatard was a big influence, bands like that and all the punk stuff they’d been listening to and playing at their hometown underage shows… that kind of culture.

And the first album, I think, is an extension of that EP, where it’s really fast Ramones-type songs. Then The World’s Best American Band record was all written in the studio without any premeditated songs, they just grabbed 30 days in the studio and pissed out those songs, which I think are great. It was such a stressful thing because there was nothing there at the start and you were racking your brain for anything to come out. Then the last record, it was the major label thing, we had a little money to play with, so I think there was a more deliberate effort to write the songs in advance. I think that was still a pretty new concept: to be prepared, and I think there was a lot of pressure on Tony primarily. We were transitioning labels and managment and I had gone back to finish school so I was flying back to Louisville to write. It was all just more deliberate and I think that came through. The songs are a little bit glossier for that reason.

Then this record, that we’re done writing and gonna be recording soon, it’s been a lot of COVID writing. We’ve written so many demos because we’ve had so much time. We’ve worked on them in a lot of different fashions: meeting up together over quarantine, and working over Zoom – writing virtually. In that sense, every record has been made very differently. There hasn’t been the same formula each time.

AC: During quarantine, you made a YouTube video showing guitarists how to play the riff from White Reaper’s “Judy French.” I learn how to play songs on YouTube all the time, but I’ve rarely seen it done by someone who is in the band.

It’s all guitar nerd. That’s really all I am at the end of the day. – Hunter Thompson

HT: Well there’s so many kids who ask for tabs on Instagram and there’s a lot of covers and I’ve never seen someone play it right… plus we just needed something to do. I was at my parent’s house and our manager asked if I wanted to do a tutorial and it sounded fun. Honestly, I want to do more of them because it would be a blast and it’s fun that people care to learn and send us videos of them playing the song.

AC: How much of your DNA is guitar nerd?

HT: It’s all guitar nerd. That’s really all I am at the end of the day. I love music, I love songwriting, I love all of it, but if there’s anything that I’m going to do, it’s play guitar and practice techniques and scales and arpeggios and target notes of chord projections. It’s an endless pursuit that I’ve been doing since fifth grade. It just clicks with me and I love it. Getting better is a slow process, but it’s endlessly fun.

Being home for these last two years, I’ve gotten to play more guitar than I usually do and I love it. When we’re on the road I play the same 20 songs all the time, so to have all this time has been great for that. I got a Kemper, which is an amp profiler that sounds amazing and got a bunch of new guitars and have had so much time to lean in. So I feel like I’m probably on my best game right now.

AC: On “Real Long Time” there’s those Thin Lizzy style guitar harmonies. Is there a classic rock appreciation amongst the members of White Reaper?

HT: More than anything, it’s what we all grew up playing and liking. We all had that in common – especially Tony, he’s a true human jukebox and I think he grew up listening to what his dad was playing, which was a lot of Bruce Springsteen, a lot of Judas Priest, Iron Maiden, Black Sabbath stuff – Thin Lizzy too. So that’s just his style. I’m definitely a chameleon guitar player. I love post punk stuff – really angular guitar playing is my favorite, but I also love classic rock: Joe Walsh, Lynyrd Skynyrd-type playing. I’ve spent so much time learning those solos because they’re ultimately the most fun thing to play. When you’re becoming a blossoming young guitar player, at a certain point, you make the transition into wanting to learn solos and you’re gonna go to the classic rock ones because they’re the fuckin’ best!

AC: What have been the holy-shit moments, for you personally, while playing big shows with White Reaper?

HT: We were all in fourth or fifth grade when the Killers’ Hot Fuss album came out and didn’t really have context for what influences they were drawing from like Pet Shop Boys and Depeche Mode. That record, which is a masterpiece in my opinion, was our introduction to that sound and we were in love with them as kids. So opening for them was insane. Also opening for Weezer was great and weird. We’re going on tour with Pearl Jam this upcoming summer, next year. That’s gonna be crazy – it’s all in arenas in Europe. It feels very surreal. Then, also, you also get desensitized to it, like it’s just normal, but it’s not at all and if my fifth grade self knew that I’d done that, he’d be very excited. 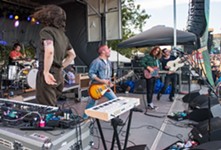 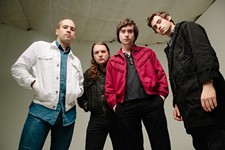