Psychedelic visionary and Janis Joplin bandmate – a "man for the ages"

Powell St. John, the songwriter, musician, storyteller, and visionary artist who played alongside a young Janis Joplin in the Waller Creek Boys and wrote songs for psychedelic rock pioneers the 13th Floor Elevators, has passed away, friends have confirmed. He was 80 years old. 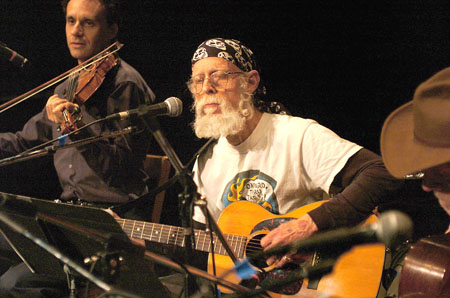 An Austin countercultural legend and a wondrous original with a unique power to seemingly manifest his own universe, St. John was succinctly described by Bill Bentley in an Austin Chronicle feature as, not just a man of his time, but a “man for the ages.”

Born Rayward Powell St. John in Houston, the son of a high school principal grew up in Laredo and moved to Austin in 1959 to attend the University of Texas. In the early Sixties, he began playing harmonica and singing in the Waller Creek Boys, a folk trio featuring Lanny Wiggins and inevitable legend Janis Joplin at Kenneth Threadgill’s filling station on North Lamar.

“We all wanted to play folk music,” St. John remembered of that time, while being interviewed by Bentley in 2006. “And we became this small collection of like-minded souls who got together whenever we could. No one really thought beyond the evening's entertainment, but at that age we all felt anything could happen. Sometimes it did.”

Soon after, as the psychedelic scene began to coalesce in Austin, St. John co-founded unique music explorers Conqueroo and, upon request from fellow Austin visionary Tommy Hall, wrote several songs for the legendary 13th Floor Elevators. Among them, he penned “Slide Machine” from sophomore LP Easter Everywhere and the holy reverberation “Kingdom of Heaven,” which was on the group’s debut Psychedelic Sounds of the 13th Floor Elevators. That song includes the lyric:

In 1966, St. John’s journey had brought him to the cultural hotbed of San Francisco, where he linked up with vocalist Tracy Nelson to form Mother Earth. The psychedelically-informed rhythm and blues act performed at the Avalon Ballroom and the Fillmore Auditorium and signed with Mercury Records. Their four albums include contributions from Mike Bloomfield and Boz Scaggs. On their top 100 charting 1969 LP Make a Joyful Noise, St. John wrote the excellent vagabond country tune “Then I’ll Be Moving On.”

“In the midst of the budding psychedelic sound, Powell's music was completely original and brilliant," Nelson told the Chronicle in 2006. "He gave us validation as something more than a derivative R&B band, and he inspired me to stretch out beyond my desire to be Irma Thomas. I think he was the most significant and profound artist around, and by the very nature of that, the least appreciated of the era.”

After stepping away from Mother Earth because they relocated to Nashville, the opposite side of the country on which he wanted to reside, St. John played with Minor Wilson in a short-lived California outfit called the Angel Band.

Meanwhile, Scaggs, who went on to be a star the following decade, included St. John’s “I Will Forever Sing (The Blues)” on his 1971 album Moments. Four years earlier, Joplin’s band Big Brother & the Holding Company had opened their self-titled LP with her old friend’s song “Bye, Bye Baby.”

It wasn’t until the next millennium that St. John – who lived in Berkeley, CA with his wife Toby, with whom he had daughters Amber and Acacia – began issuing solo albums. Right Track Now, released in 2006, contained a trove of old and new originals and, three years later, Tompkins Square Records put out On My Way to Houston. The title track was reviewed by the Chronicle’s Greg Beets as having “deftly lampooned preacher-in-the-whorehouse hypocrisies that define Lone Star political life.” In 2017, the Lysergic Sound Distributers label released an archival LP of St. John’s songs, appropriately titled Sultan Of Psychedelia.

This spring, the Webb Gallery in Waxahachie, TX showed a retrospective of St. John’s visionary drawings, ranging from 1966 to 2013. Previewing the exhibition, Powell remarked:

“I only draw what I see. Psychedelic drugs have had a major impact on my work, but that is only part of the story. Included in this collection are some works that, frankly speaking, come from somewhere else. These visions are usually wrapped in satire, mystery, and psychedelic terms which I suspect are transmitted to me from some other time and place where my only function is to serve as a conduit for them.” 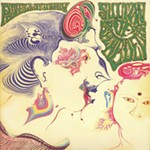 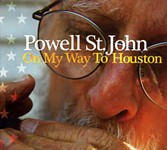 Powell St. John
On My Way to Houston (Record Review)