Billy F. Gibbons on the Death of Dusty Hill and the Future of ZZ Top 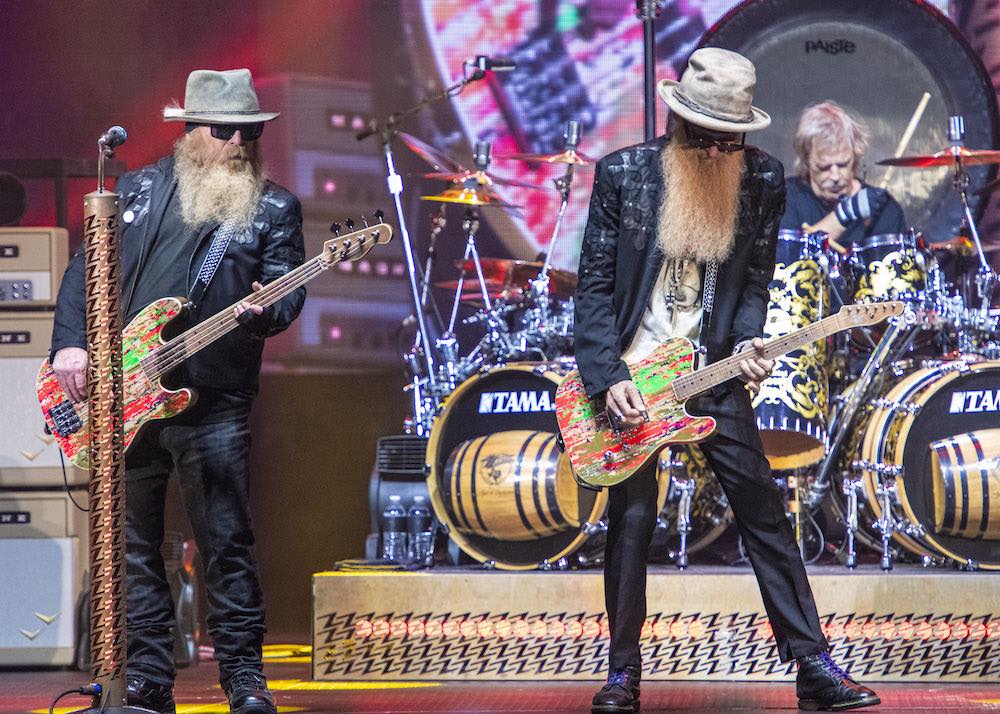 There have only been two lineups of Texas blues-rock institution ZZ Top, leader/singer/guitarist Billy F. Gibbons being the constant factor. After longest-serving bassist/singer Dusty Hill passed away in his sleep at age 72 on Tuesday night, Gibbons put in a call from his tour bus yesterday afternoon to the Chronicle.

Gibbons reflected on his late bandmate’s importance, his request that they continue without him, and the upcoming ZZ Top album – Hill’s final recordings with Gibbons and drummer Frank Beard, the latter of whom he’d played with since age 14.

Austin Chronicle: Sorry about the occasion. My deepest condolences.

Billy F. Gibbons: Well received. It is what it is. We are following Dusty’s wishes to proceed, and as he said, “The show must go on!”

Austin Chronicle: That’s incredible! So that means this is not the end of ZZ Top?

Billy F. Gibbons: Well, I said, “Dusty, I’m happy to follow your wishes. What do you have in mind?” He said, “Grab Elwood [Francis, ZZ Top’s longtime guitar tech] off his tech station and strap my bass on him.” Which we did, and doggone if he didn’t play every single song note-for-note! ‘Course, he’s been with us for 30 years. [laughs]

Austin Chronicle: And I noticed he didn’t shave his COVID beard, either! [laughs]

Billy F. Gibbons: Oh, yeah! This is so insane! Dusty and I, we were talking early on, and I said, “So, it looks like we’re stuck inside of some kinda shutdown thang. What’re you gonna do?” He said, “Well, I’ll tell ya what I’m not gonna do, and that’s cut the grass!” [laughs] And we were having a band meeting, and Elwood said, “Well, if you guys aren’t gonna cut the lawn, I’m not gonna trim my whiskers!” [laughs] That was a year ago!

Austin Chronicle: Oh, Lord! That proves that Elwood is the fourth member of ZZ Top!

Billy F. Gibbons: Yes! Good heavens above, I thought he was halfway joking, until he showed up for rehearsal. And I said, “My God, it’s as long as mine!” [laughs]

Austin Chronicle: I thought it was beautiful. I even had to set [ZZ Top publicist] Bob Merlis straight. He said, “Is that fake?” I told him, “No, take a look at Instagram – he really grew a beard!” [laughs]

Billy F. Gibbons: Yeah. I had to make an announcement. I said, “Folks, I’ve seen a couple of suspicious folks out there thinking it’s a pin-on beard.” And Elwood gave it a good yank and said, “OUCH!” [laughs]

Austin Chronicle: That’s awesome, and I’m happy to hear that ZZ Top will continue. I wrote about that in my remembrance of Dusty for the Chronicle: “I am crying. If you are Texan, you are too.” Meaning, if you are Texan, you will weep if any member of ZZ Top dies. What I didn’t say was, “You’ll probably be weeping twice as hard if Willie Nelson dies.”

Austin Chronicle: I mean, I have written about this several times. But ZZ Top created a new way to be a Texan.

Austin Chronicle: You did. It’s not quite so rural. You could still wear a cowboy hat, but you’re gonna be hip.

Billy F. Gibbons: Yep. That’s right. I’ve got a good notion to take your very words right then and there. We’re off tonight, but we’re pressing onward. We’ve received the invitation to take the deck tomorrow night, and what I’ll do is I’ll take Dusty’s cowboy hat and I’ll put it over his microphone and I’ll sing “Tush” in his honor.

But yes, Elwood volunteered to take Dusty’s directive. And we accomplished three nights. I was scanning the first couple of rows, and I saw no frowns. Quite the opposite. I saw people giving each other the elbow and pointing, and they said, “The ZZ Top circus still lives on. Lookit – they’ve got another freak up there!” [laughs]

Austin Chronicle: So, does that mean we make [Kentucky native] Elwood an honorary Texan now?

Billy F. Gibbons: Why not? He would certainly be steps closer. [laughs]

Austin Chronicle: Was I far off in saying that Dusty was the glue of the band?

Billy F. Gibbons: I would say so. I would tend to agree to that, yeah.

Austin Chronicle: I wrote that ZZ Top was never flashy, the way so many loud rock bands steeped in the blues in those days were. You guys were always gonna search for that one perfect note, and you were gonna ride it to death.

Austin Chronicle: Dusty was a big part of that.

Billy F. Gibbons: His steadfast bottom end really did become the cornerstone, which allowed Frank and I to sprinkle on the cinnamon over the gingerbread that Dusty was baking up. [laughs]

Austin Chronicle: That’s awesome. I think what I wrote was that it didn’t matter what phase of ZZ Top you were talking about – that hard-grinding boogie of the early days, the proto-electronica of Eliminator, or the back-to-the-roots sound of La Futura. You guys were always gonna sound like ZZ Top. It was always gonna be recognizably ZZ Top. And that steady bass line was a large part of it.

Billy F. Gibbons: Yes. Dusty joined me just recently, when we were passing through Nashville. We were invited to a songwriting session – kinduva pass-around-the-guitar session. And they said, “Hey, let’s write a country song.” And they said, “Well, Billy and Dusty are here, so it’ll be a country song, but it’ll sound like ZZ Top!” [laughs]

Austin Chronicle: I didn’t get to spend as much time with Dusty as I did with you, but he was so good-natured.

Billy F. Gibbons: He was. Of course, we all shared just about equally. But I credit Dusty’s good nature for keeping the forward motion in high gear. It could have been a songwriting session, it could have been a rehearsal session, or a studio session. Once that big, broad smile came in and he started laying down the good groove? Again, Frank and I had the luxury of tip-toeing around something that was so solid, we were left smiling. And that’s saying a lot for a trio, which is bare bones. Yeah, you’ve got a couple of two-piece outfits, the Black Keys and whatnot. But to have the solidity that Dusty provided was a real bonus.

Austin Chronicle: Absolutely. All the frequencies have to be covered whenever you’re making this music and doing it as a trio. He certainly had the bottom end, and you have a fairly dark guitar sound, yourself.

Billy F. Gibbons: Yeah. It bears repeating: I recall giving Dusty the greenlight to twist off during a recording session. We thought that all of the bass parts had been duly delivered, until we came to a section that was missing two bars. And I said, “Well, hell! Two bars? What is that – 16 beats, the way we’re doing it?” And I looked at the engineer Joe Hardy, and I said, “Joe, you’re a bass man. Go ahead and lay down that little missing section.” We tried for two hours to match the Dusty sound, and we passed the bass guitar around the entire control room. Everybody took a shot, and I said, “Time to call Dusty back!” [laughs]

Austin Chronicle: I remember you one time claiming Dusty had a built-in fuzztone in his index finger.

Billy F. Gibbons: Yes! The index finger in his right hand had been injured in a football accident in his high school days, and what do you call it when an extremity expands?

Billy F. Gibbons: The tip of his index finger, when it healed, it was more like a lightbulb than a fingernail. [laughs] And I suspect that in no small part that it might have been indicative of how nobody else could sound like The Dust! [laughs]

Austin Chronicle: I spent all day crying yesterday, Billy. I am not afraid to admit.

Billy F. Gibbons: Y’know, had I not been right there holding his hand onboard the coach after the second night of performance, and I knew that this was very out of character. I mean, Dusty was the character. But to see him so concerned that he wasn’t 100% delivering – and on any given night, he was 110%.... Y’know, I’m just glad that he went to sleep and that was that. He wasn’t cryin’ the blues. He was a little disappointed. Initially, we said, “Yeah, take a couple of days off, 10 days off – whatever you need.” And here we are. But again, he went out being the showman we all remember him as being. I guess we can say Dusty’s restin’ easy.

Austin Chronicle: Indeed. I know that you announced there were plans to do another ZZ Top album this year. Will that continue with Elwood?

Billy F. Gibbons: Well, the good news is that the sessions had gotten underway...oh, gosh, it’s been a few months back. We felt that given the fact that we’ve got our own private recording studio, we tiptoed in and I said, “Listen, instead of just sitting at home, we’ve got this invitation to come up with another round of whatever ZZ comes up with.” So, there’s a bucketful of stuff. Fortunately, I said, “Dusty, here’s the lyric sheet. See if you can make heads or tails of it.” He goes, “Well, can I sing it?” “Yes, you can!” [laughs]

Billy F. Gibbons: I told him, “Listen, man – with your voice, you could sing the calendar and it’d be a delight.” Dusty said, “Y’know, that’s not a bad idea. If we ever get back to goin’ onstage, maybe we should add the calendar into the show! I know all the words!” [laughs]