A teenager in Russia tells the Chronicle that synth-pop artist Mr. Kitty sent him nude photos, graphic sexual videos, and explicit texts over a nearly four-month exchange of direct messages on social media. The victim says he was only 15 at the time and had revealed his age with the singer. 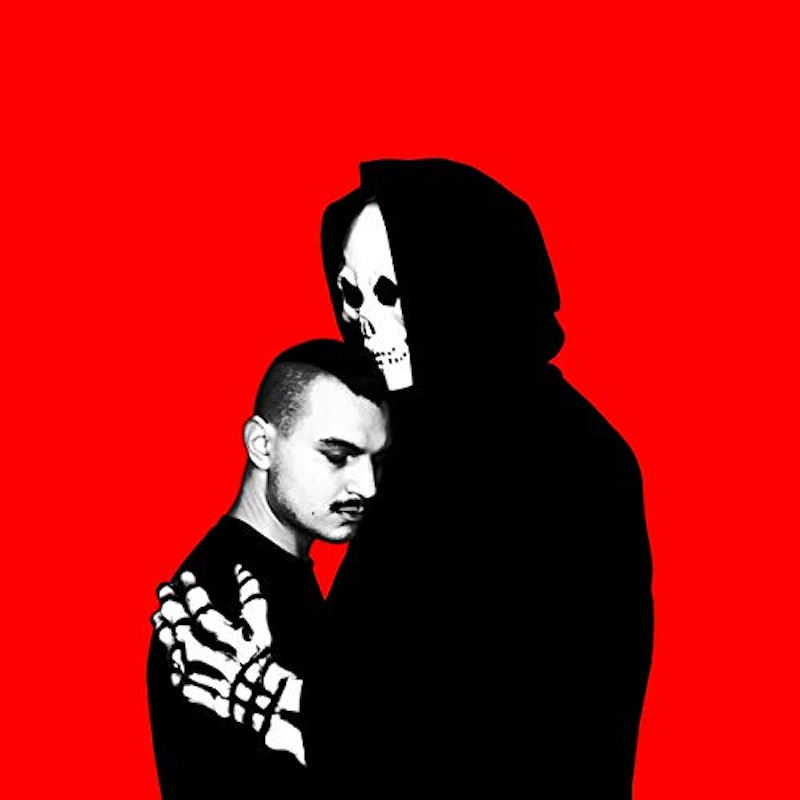 The Austin-based musician, real name Forrest Avery Carney, built a successful career as a singer and performer in the goth and synth-pop scenes, evidenced by 1.3 million monthly Spotify listeners and the popularity of his track “After Dark” on TikTok.

On June 26, Mr. Kitty released a statement via Twitter, Instagram, and Facebook in which he admitted to having an online relationship with an underage fan, but without the specifics provided to the Chronicle by the teen in Russia.

Here’s the statement, in full: 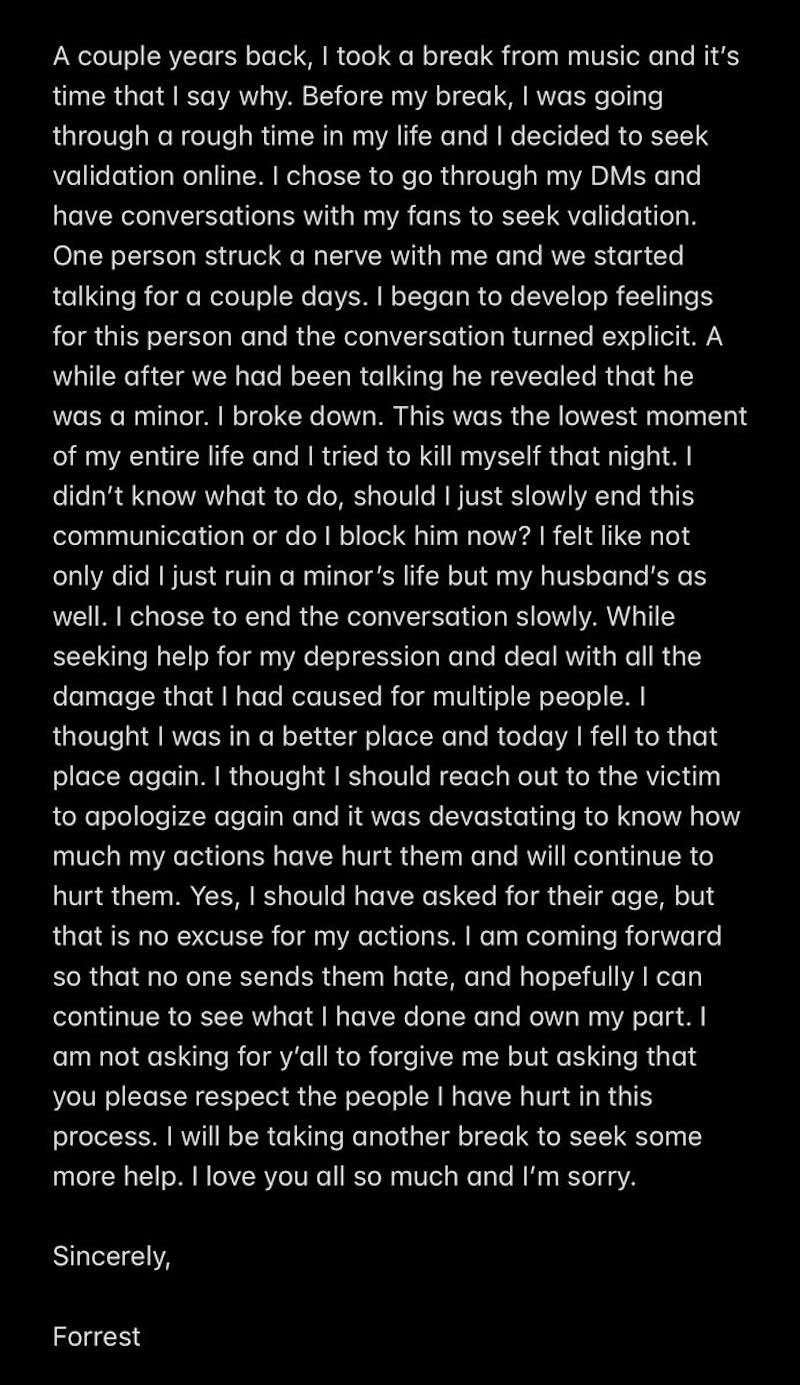 The statement Mr. Kitty posted to social media on June 26.

Mr. Kitty discusses challenges in his personal life and to his mental health, apologizes and asks that his fans treat the people he's hurt with respect, and says he's taking another break to seek help. While Instagram and Twitter allow posters to disable comments, Facebook does not. On that platform, a considerable chorus of fans commended the singer on his honesty and comforted him with the allowance that people make mistakes.

However, the day after the artist’s statement went public, a Twitter user identified as "vasya" posted purported screenshots of graphic DMs between Mr. Kitty and another person. Those messages include the victim divulging his age to the singer before the 29-year-old asks him “Do you like that I’m older than you?” and “You like me being your daddy?” These questions presaged months of graphic sexting and the sharing of pornography; on June 29, "vasya" shared screen recordings alleged to show the full extent of the communication that occurred in 2019. Both the initial screen shots and more extensive screen recordings matched the DMs the Russian teen later showed to the Chronicle on his phone during a video chat, a meeting that included him playing audio messages from his correspondence with Mr. Kitty.

The young fan, whose name will not be used because he says he’s still a minor, told the Chronicle, via email, that he feels “grossed out” by what has happened and believes that Mr. Kitty made the apology as an effort to “save his career.” Here is the full statement that the victim sent our publication, which offers a chain of events significantly contrasting with Mr. Kitty’s characterization of the situation. That email is reproduced verbatim here:

This situation occurred in May of 2019. I was a big fan of his music and at a time and wanted to know him more. In the 3rd of May I texted him in dm, asking him height/weight. I was with my friends and they saw what I texted. After he responded my friends asked him with my phone about his dick as a joke. He answered me, after seeing all my profile pictures and realizing I’m a minor, with a nude pic. At first, I understand why he sent me nudes since he knew I’m a minor, I was scared af but at same time I was flattered to receive this kind of attention from a guy I liked. I told him that it’s ok and no one will know about it, then he replied “Send me yours”. Later I sent him my nudes, because I wanted to revive our relations for some time by this bad way of sharing pictures. I asked him to guess my age, he thought that I was 16, but I immediately told him that I was 15 in fact. As soon as I said, he apologised, but realising that I’m ok with this and won’t tell anyone, he continued sending pics and vids.

While chatting, I sent him a vid of a “The Sims” gameplay, where I made copies of us have sex. He said he wished to see this irl but unfortunately, we were in different cities. He called me in a video chat and wanted to see me but I was too scared to pick a call because I was shy of my English and was not ready to see my idol like this. In his apology he mentioned his depression and that he felt bad, wanted to commit a suicide but all of this is a lie. He continued to chat with me till the last moment, told me he’s my daddy and sent me sex tapes, asked “Do you like me being older than you?”. I answered his provocative messages and I was not ok, even if I didn’t fully realise that back then.

All of the seriousness of this situation came up to my mind in 2020 when I had a breakdown and I had my first relationship. In April of 2020 he sent me his last sex tape with another person and asked if I was interested in sharing nudes. After my respond he deleted that video and texted “ok”.

I’m 17 right now and 2 years after I shared this story because I accidentally told someone that I chatted with MrKitty in 2019 and they asked for details. Even this situation took place a long time ago, I still get grossed out because of this. When people started to find out all the details, I was told that it’s my fault, that I made him do this and that I didn’t mention my age. Everybody defended him, saying that “he can change”, but I don’t believe that. His apology is just a try to save his career and I’m glad that people help me by sharing this story.

Mr. Kitty did not return multiple interview requests from the Austin Chronicle.

Upcoming tour dates for Mr. Kitty have begun to disappear. A Los Angeles concert scheduled for November has been postponed due to “personal matters” and he has quietly fallen off Absolution Fest in Tampa, FL. Meanwhile, the Chicago-based darkwave record label Negative Gain made an official announcement about the matter:

As we continue to evaluate information involving the actions of Mr.Kitty, we would like to send a clear message, WE DO NOT SUPPORT THE ACTIONS TAKEN BY MR.KITTY. Starting immediately, NGP will discontinue all sales of Mr.Kitty’s albums. We are focused on supporting those who have been harmed including Mr.Kitty’s estranged husband Isaac Ross LeMaire. Moving forward Isaac has been given all rights to Mr.Kitty’s streaming sales to help rebuild his own life. Negative Gain and Isaac have also come together to make a significant donation to the following organizations: RAINN and HRC.

Less than six weeks before his own admittance of a sexual transgression, Mr. Kitty used Twitter to speak out against Ethan Kath of the dark electro outfit Crystal Castles, whose former singer, Alice Glass, accused Kath, the group’s producer/songwriter, of physical abuse and sexual coercion in 2017 – accusations he denied. 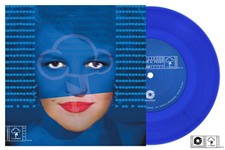