Jason Reece (… And You Will Know Us By the Trail of Dead), guitarist Andrew Leeper (Markov), bassist Erick Sanger (ex-Sparta), and drummer Sam Rich present their debut as Band of Bastards. Delete. Repeat drops July 23 on Redacted Records/Silver Door Music. A hardcore bash, it promises to liberate you live and in the flesh. 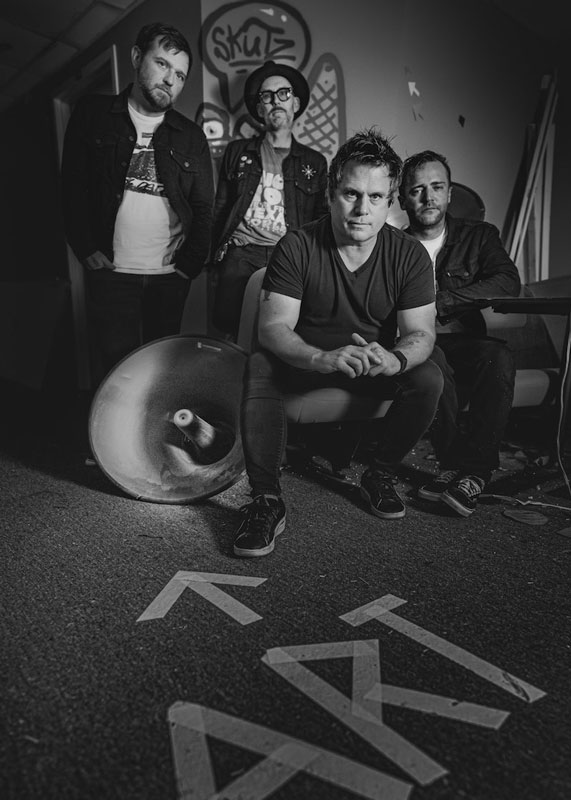 Stamp-out-the-fire backbeat, snapping lawnmower riffs, and Reece jamming the mic up your nose, BOB’s introductory grenade lives up to the album’s titular command. 1:38 of “Prospect,” for instance, tattoos its message easily enough, “This will never be for sale,” but punctuates it with a scream. Near the midpoint, elbow-thrower “Holy Roller” bounces like a 40-ounce malt liquor off your forehead as launched from the stage at the Blue Flamingo in Nineties ATX. The equally pulsating B&W video doubles the fun, its shouter mocking up perfectly as a hell-raising televangelist.

Check out “Holy Roller” here and check in with Reece below:

Austin Chronicle: Love the stats here: 12 songs in 25 minutes, and over half of them under two minutes. As a songwriter, what’s the secret to writing a complete composition that clocks 1:38?

Jason Reece: We all wanted to make a bunch of songs that required no heavy thinking or anything too complicated. Andrew would sketch out these blasters on GarageBand, then we all contributed to the ideas in a loud, sweaty room. Shorter songs seem to get to the point and cut the fat.

AC: How much of this material emerges from the well-known legacy band dynamic of, “This material wasn’t quite right for TOD” and where is that line for you after two decades of your wildly popular day band?

“It’s a really optimistic moment here in Austin. I hope we can keep it going and keep it healthy in every way.”

JR: The music wasn’t related to anything Trail of Dead. This was something brewing up before I joined these guys. Andrew, Sam, and Sanger were banging out hardcore instrumentals months earlier. Sanger sent me these tracks while I was on tour and asked if I was interested. I was blown away by the ferocity and urgency. Months later, I got in a room with them not knowing if it would work. We immediately clicked.

AC: How did the last year-and-a-half figure into the band and album?

JR: We were moving along at a steady pace and like everyone the pandemic halted any recording or activity. We really haven’t been playing together for that long, but the musicianship of these folks makes it seem so… . These motherfuckers can play.

AC: What’s your personal a-ha moment with hardcore as a youth and why does it continue to endure with generation after generation?

JR: A friend’s older brother gave me a mixtape cassette when I was 12. On one side, there was all this British punk like the Sex Pistols and Clash. On the other side was a bunch of first wave hardcore bands like Minor Threat, Bad Brains, and Negative Approach. The speed and aggressiveness spoke to me. I was hooked. I was especially enamored by the D.C. scene. The early Dischord bands made me want to pursue that PMA.

AC: What plans for Band of Bastards once the album drops? Will y’all play shows?

JR: We have a show booked with another amazing, hard-as-fuck band called Black Mercy at the Spiderhouse Ballroom on July 23. That’s when the full-length drops and we hope to play some skate ramps or house parties later on this year!

AC: Finally, how are you finding music’s emergence locally and beyond after a year-and-a-half of pandemic lockdown?

JR: It’s so crazy how fast we are bouncing back with all the live shows happening. It’s a really optimistic moment here in Austin. I hope we can keep it going and keep it healthy in every way. Gotta keep up that PMA!