Watch This: Branden Rex Flexes his Cat Fancy with “River”

“I don’t see myself with no one but you,” he sings to hairless feline

There’s a supreme stillness pervading Branden Rex’s “River” video. The melodic hip-hop songwriter, dripped up in outfits that cause him to fade like a chameleon into the striking set design, adopts a stoic persona in the clip. For much of it, the only thing moving is his mouth.

Well, that and the hairless cat that stars alongside him. 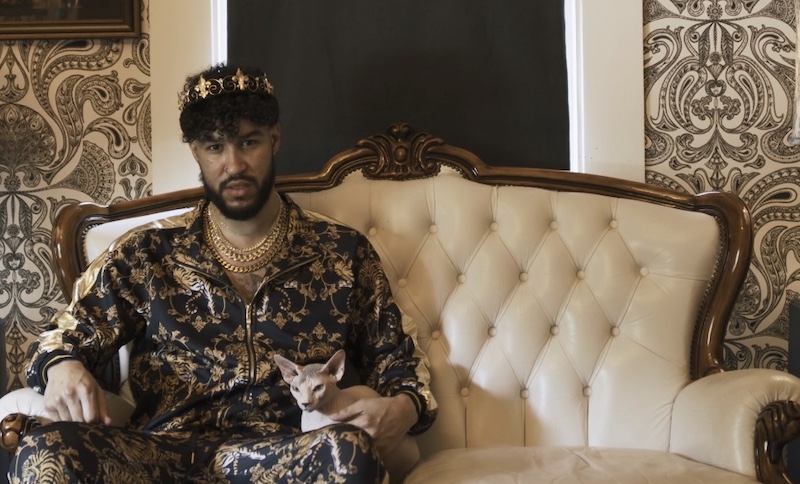 Branden Rex and Henry, a hairless cat, in the "River" video.

The Austin artist’s latest single meditates on the obsession of a relationship, with the movement of water symbolizing a flow of emotions through a predictable path. For the video, Rex flipped the concept.

“Instead of an obsession with a woman, I decided to show my obsession with my cat,” Red explains. “I wanted to be more of a prop – a piece of scenery – and just hold a cat.”

It just so happens that Rex’s cat, Henry, has a particularly stunning appearance: he’s completely hairless. That furless feline gives the clip instant intrigue, given that those fleshy sphinx are usually reserved for super villains. In one memorable scene, Branden and Henry bathe together in a clawfoot tub – wearing matching shower caps.

Rex’s no stranger to crafty visual concepts, having showcased old school roller skate skills in the video for his 2017 track “50¢ Wings.”

“River” kicks off what will eventually be a four song EP. The project, titled love, b, follows the timeline of a collapsed relationship: obsession, infidelity, breakup, and personal growth. It’s the Minnesota transplant’s first release since his 2017 LP B&W Hipster. On that album, Rex rapped extensively. Presently, he’s leaning into a much more melodic style – an evolution circling back to his coming-of-age musical inspirations.

The Austin artist’s latest single meditates on the obsession of a relationship, with the movement of water symbolizing a flow of emotions through a predictable path.

“My dad was really into gangster rap and my mom liked Nineties R&B, which was great music to have your parents force-feed you, but when I was in middle school, I got into pop punk,” he explains. “Now there’s this new wave of hip-hop, basically emo rap. A lot of people my age don’t like the emotional, sing-y, whiny shit, but if I were 16 again, this would be my jam!”

That’s not to say “River” sounds explicitly like the genre cemented by artists like the late Juice WRLD, but having room for those sad tones suits Rex’s heart-on-sleeve songwriting. For the first video of his new artistic era, Rex rented a historic home on East 12th and shopped for clothes, accessories, and props that meshed with the residence’s highly patterned interior. He did so with the econo-minset of an underground musician.

“I spent like $600 on Amazon for all that shit, down to the earrings and the fake jewelry, and then I just returned it all,” he laughs.

As for the cat, Rex isn’t sure he’ll cast him in any more videos.

“Henry was impossible to work with – he got camera shy,” he reveals. “I have to give it up to people who make movies like Homeward Bound. It’s not easy.” 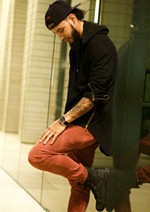