In 1990, Where the Pyramid Meets the Eye reintroduced the world to Texan psych pioneer Roky Erickson with an extensive tribute album including contributions from the Butthole Surfers, R.E.M., the Jesus & Mary Chain, Doug Sahm, and ZZ Top. Three decades later, it remains an essential document of the rock & roll pioneer’s vast influence.

Produced by longtime Erickson fan, booster, and friend Bill Bentley, then a senior publicist at Warner Bros. Records, the collection of covers manifested with the intention of raising money for its struggling subject by exposing his music to a wider audience. In fact, it proved a turn-around event evidenced by the ensuing late-career triumphs of Erickson, who died May 31, 2019.

Now, Bentley’s captained a second Erickson tribute, an all-new songbook brimming with modern interpretations of the 13th Floor Elevators frontman. May the Circle Remain Unbroken: a Tribute to Roky Erickson releases July 17, Record Store Day, on choice archival label Light in the Attic. Advance ears on the 12-song comp proves that the godfather of Austin rock continues to serve as a supernatural inspiration to artists of multiple generations.

Wait ’til you hear Ty Segall taking on “Night of the Vampire” and Neko Case handling “Be And Bring Me Home.”

As with the original tribute, Bentley and a number of musical participants gather at Austin’s musical town hall, Waterloo Records, for a release party on July 18. The only difference is, this time, Roky won’t be there. Or will he? 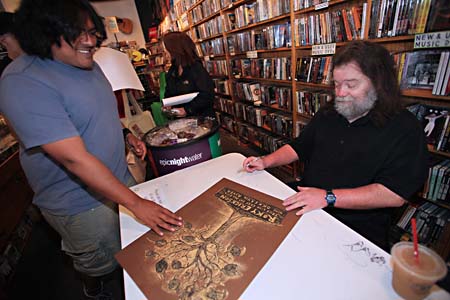 Here’s the press release Bentley, a longtime Chronicle contributor, sent to the paper:

On Sunday, July 18, from 4-6pm, the spirit of Roky Erickson will once again take over Waterloo Records at the corner of North Lamar and West Sixth Street in Austin. There will be a celebration and autograph session to mark the new release May the Circle Remain Unbroken: a Tribute to Roky Erickson. The 12-song album, to be released on Light in the Attic, was recorded over the last 14 months, in all kinds of configurations and ensembles, and features many of the Austin legend’s original songs in brand new versions by Billy F Gibbons, Lucinda Williams, Jeff Tweedy, Alison Mosshart & Charlie Sexton, Ty Segall, Neko Case, Chelsea Wolfe, Lynn Castle & Mark Lanegan, Gary Clark Jr. & Eve Monsees, Margo Price, the Black Angels, and Brogan Bentley. Needless to say, it is an expansive vision of one of rock & roll’s most original singer-songwriters.

Signing autographs at Waterloo Records on July 18 will be Charlie Sexton, Black Angels, and Eve Monsees, along with album producer Bill Bentley and album co-producer and Light in the Attic founder/co-owner (and Austin resident) Matt Sullivan.

Over 30 years ago there was a similar event at Waterloo Records when the first Roky Erickson tribute album, Where the Pyramid Meets the Eye, was released on Sire/Warner Bros. Records. Celebrating the evening in 1990 were Roky Erickson himself and album participants Doug Sahm, Lou Ann Barton, Chris Thomas King, John Wesley Harding, and Primal Scream's Bobby Gillespie. Also onboard that night was album producer Bill Bentley.

Roky Erickson, a founding member of the 13th Floor Elevators in Austin in 1965 and one of rock & roll’s most powerful and unique artists for 55 years, passed away on May 31, 2019. He is often credited with helping create psychedelic rock, and went on to explore an increasingly expansive musical universe for his entire life. Erickson has recently been labeled as the Father of the Live Music Capital of the World, who pushed at the boundaries under extreme challenges but always with soaring musical rewards. R.I.P. Roky Erickson. 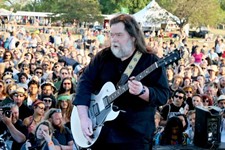