Denny Freeman, the Graceful Guitarist Who Made Everyone Sound Better, Has Died

Masterful player had a foundational presence on Austin music

Denny Freeman, the soulful, musically deep multi-instrumentalist whose presence has been foundational to Austin over the last 50 years, passed away today, at age 76, after being diagnosed with cancer only weeks ago. 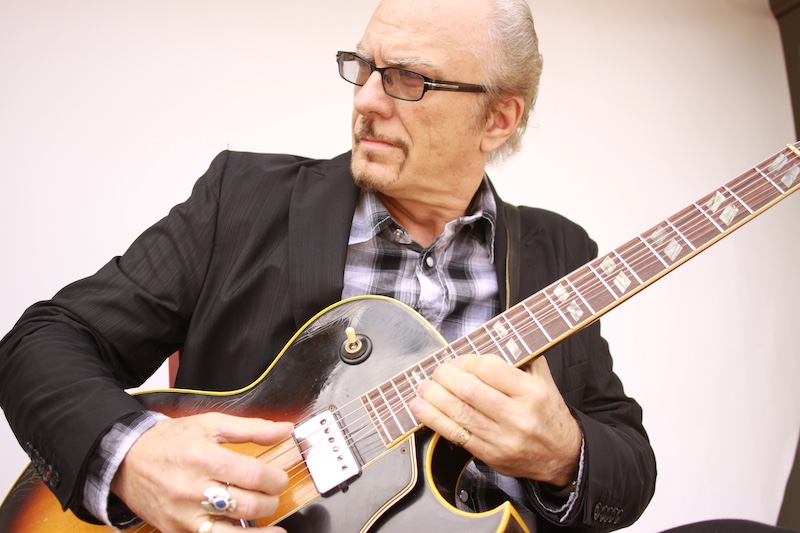 When Freeman got inducted in the Austin Music Hall of Fame in 2010 – a no-brainer given his long and remarkably impactful career – he became overcome with emotion and choked up during his acceptance speech. The following day, he emailed his friend and Austin Music Awards director Margaret Moser, writing all that he intended to say on stage – including this passage:

“I was a part of something very special, and important, I think, in the 1970s and 1980s here in Austin, and there isn't much left of it now. A bunch of us moved here: me in 1970, followed by Jimmie Vaughan, Doyle Bramhall, Paul Ray, then Stevie, Angela Strehli, Lou Ann Barton, Clifford Antone, and many others. Derek O'Brien was already here.

“Everyone knows about Jimmie and Stevie and Clifford, but there were many others. We came to play blues. Not many folks cared at the time, but of course Jimmie, Stevie, and Antone's all became pretty well known around the country and the world later on. There was much music going on in Austin at the time, and it was all good, but as is so often the case, blues can get ignored, forgotten about. There just isn't much left of what we were doing, even as special and magical as it was.”

Born in Orlando and raised in Dallas, a young Freeman bore witness to the greats: Elvis at the Cotton bowl, Jimmy Reed and Bo Diddly at the State Fair Music Hall. Blues music enraptured him from regional radio signals. He began playing guitar at age 14 and, while in high school, played in a rock band called the Corals. In 1970, Freeman moved to Austin.

It was here with vocalist – and eventually famed DJ – Paul Ray, he catalyzed the Cobras – a band that set the stage for ensuing local breakouts Fabulous Thunderbirds and Stevie Ray Vaughan to put Austin blues on the international map. The band, originally consisting of Freeman, Ray, Alex Napier, John Henry Alexander, and Bubu Watson – though later featuring Stevie Ray Vaughan, Rodney Craig, and Joe Sublett, held down a mid-week residency at Red River venue the One Knite and, after that, the notorious Tuesday Cobra Night at Soap Creek, which featured 50 cent tequila shots. The brilliantly complementary Freeman would play both guitar and electric organ

Although Freeman’s professorial music skills ranged far beyond the blues, he remains a vital part of that genre’s formidable local identity.

Austin blues elder statesman W.C. Clark, in 1998 feature for the Chronicle, recalled his perception of the early Seventies: “I thought the blues scene in Austin was dying out, but it was slowly coming back then,” crediting Freeman and another magnificently talented and deeply rooted support musician, Bill Campbell, as helping usher the next wave. Freeman and Clark, with Angela Strehli, maintained an influential combo called Southern Feeling in the Seventies.

The following decade, Freeman’s musicality maintained an evergreen occupation of the Antone’s stage, anchoring a house band in which he backed touring bluesmen like Albert Collins, Otis Rush, Lazy Lester, Eddie Taylor, and Hubert Sumlin. At that point, the legendary Austin club had become a Mecca for authentic blues and its owner considered Freeman on equal footing to the genre’s best. In a 2006 remembrance of the late Clifford Antone, journalist and veteran record label executive Bill Bentley recalled Antone fervently asserting that “Denny Freeman was the greatest guitarist alive and it wasn't fair that every single person didn't know it.”

Freeman had a deep association with Vaughan brothers. He played and lived with both Stevie and Jimmie – joking that Stevie had still owed him $30 in rent. An adept piano player, he tickled the ivories as Jimmie’s touring pianist in the early Nineties around the time he stepped out solo with Strange Pleasure. He also manned the keys on albums by frequent collaborators Bill Carter, Kathy Valentine, Lou Ann Barton, Angela Strehli, and James Cotton – gracing the harmonica legend’s 1991 offering Mighty Long Time.

Not the best known of all the Dallas players who began occupying Austin stages in the Seventies, Freeman existed as the most capable collaborator and also may have been the most musically interesting. His masterclass fretwork embodied grace and authenticity, while reflecting great discipline and exuding superb tone, but he also made others better.

The primarily Austin resident – he lived in Los Angeles from 1992 through 2004 – even has a co-writing credit on a Blondie song: the vibe “Boom Boom in the Zoom Zoom Room” from 1999’s No Exit. He also co-wrote the great Percy Sledge song “Love Come Rescue Me” and is immortalized on the monumental 1988 collaborative release Big Guitars From Texas, in which he leads two songs. 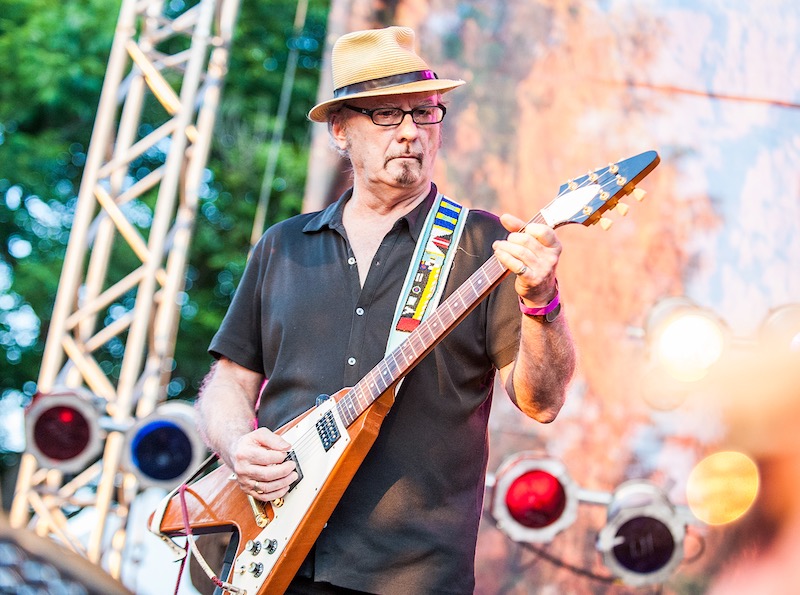 Denny Freeman performing at Blues on the Green in 2015. (Photo by David Brendan Hall)

For more than a half decade, Freeman toured in Taj Mahal’s Phantom Blues Band. With that outfit, he contributed to the Grammy-winning 2000 live album Shoutin’ in Key. With Mahal, he also played the first Tibetan Freedom Concert and was featured on the popular companion album.

Of course, the biggest call-up Freeman ever received came from Bob Dylan, who kept the deft instrumentalist in his touring band from 2005 to 2009. During that time, he lent gorgeous guitar work to Modern Times, and album that’s highly regarded by critics and fans. Freeman’s mellow, jazzy playing highlights tracks like “When the Deal Goes Down” and “Beyond the Horizon.”

In 2015, Freeman revealed to the Chronicle a bit about the curveballs Dylan would throw his band:

"It was totally unpredictable. We had a set list for each night and we even rehearsed before every show, but when we'd get the set list on the way to the stage, it wouldn't be unusual for a song to appear that I'd never heard of, much less played.

“Musically, it's kind of hard to talk about playing with Bob Dylan because nothing was ever the same. The only thing that didn't constantly change was the uncertainty about everything.”

Since resettling permanently in Austin in 2011, Freeman has remained a staple at Antone’s, the Continental Club, and the Saxon Pub. Recent outfits have been billed as No Name Band and BlueJazz. The musically immaculate Saxon Pub Friday residency that ran under his name featured Freeman playing with fellow Doug Sahm associates John X Reed and Speedy Sparks, plus Cobras' drummer Rodney Craig, who handled much of the vocal duties from behind the kit. He also collaborated frequently with guitar aggressor Danny B. Harvey.

Freeman’s seven solo albums evidenced a varied composer and masterful guitar technician, not stuck in a box of blues, instead touching soul, R&B, jazz, and rock and roll. Of one of his best discs, 1997’s A Tone for My Sins, late Chronicle scribe Moser characterized it as “a dozen instrumentals that bump, hump, shake, grind, and rock from a musician that ‘shine[s] at creation,’” later adding “That's Denny Freeman for you, the gentleman's guitarist. Just don't mistake his playing for polite.”

Local musicians and audiences, for decades, have been lucky to witness and absorb Freeman’s exquisite musical creations. Meanwhile, he’s acknowledged how Austin’s musical zeitgeist – which he helped shape – propelled his career too. In his 2010 would-be acceptance speech, he expounded on not understanding the “big deal” about Texas as a young man and later being open to the role of ambassador:

"All the images of Texas at the time were oil wells, longhorn steers, cowboys, Cadillacs, all that. None of which was in my life. So I didn't get it. And then, in the late 1970s, early 1980s, it happened that if you were a musician from Austin, you could get work across the country and in Europe, again, just for being from Austin. For my band the Cobras, it was opened up by Jimmie and the T-Birds, then Stevie.

"But wait, Austin's in Texas, so it was about that, really. And it was being on the East Coast and other places that I could look back, look at Texas from afar and at Texans, and get a perspective on all that. I liked it. I saw who we were, what made us different. It wasn't just all cowboy images. It was who we were – our gumbo of music. And it was good.

"So, if you're new to Texas, welcome. I think you'll like it, because it's good to be a Texan. And the point of all this is, as I go out into the world, I feel like I represent Texas in some small way. I promise I'll try to make Texas look good."

Fair to say, Denny Freeman made Austin sound good, too. 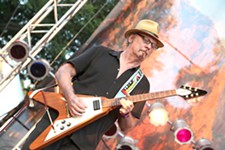