Bands and residents soundtrack Been There event 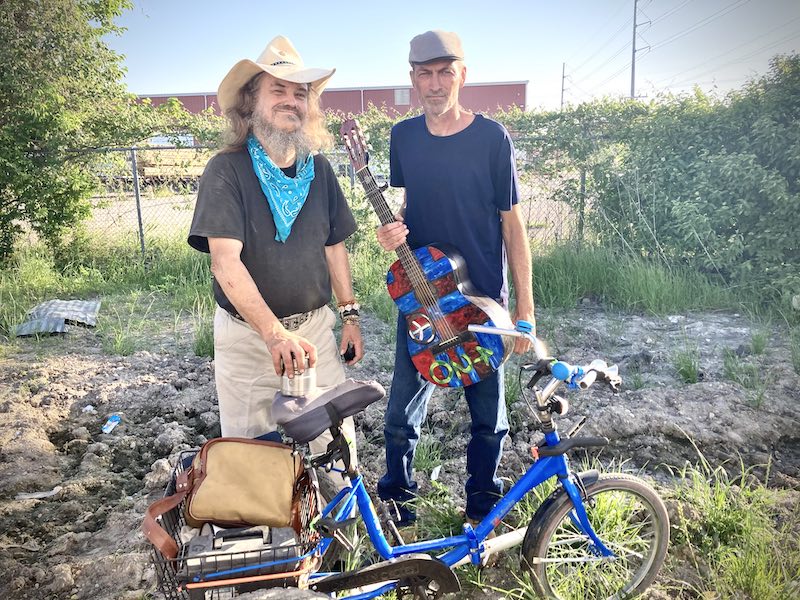 “You shouldn’t be here. You should be on a tour bus.”

That’s Cole, a visual artist who currently lives at the Esperanza Community, sharing a heartfelt compliment about another resident, Donald Montgomery (aka “Hippie”). Both men had just performed original songs on a professional stage within the encampment for houseless people to a few dozen visitors – mainly musicians, media, and folks from the video production industry.

The event, an unadvertised mini festival held on Tuesday evening, featured performances from local acts Gina Chavez, Folk Uke, Nané, Buffalo Hunt with Popecoke, and Wild Child, while artist Chris Rogers painted a mural behind the stage. Together, they launched Been There, a documentary TV series in which high profile musicians perform in locations where people are experiencing homelessness. Their efforts attempt to deepen awareness of the ongoing humanitarian crisis, while also providing entertainment for an often overlooked population.

Organized by visual services business Onion Creek Productions, the night commenced with a vibe-y performance from most of Grupo Fantasma, plus original guitarist Adrian Quesada, playing their first set in over a year. 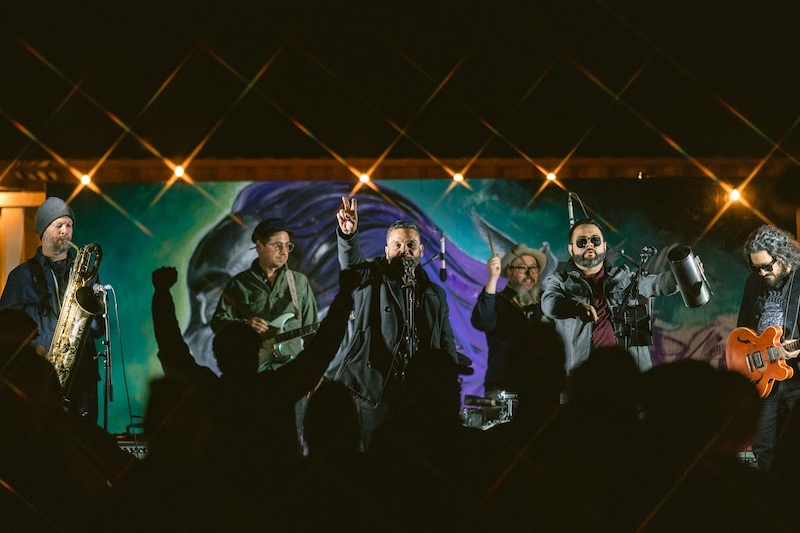 Still, the start of the proceedings, in which five inhabitants at the once abandoned lot on South Hwy. 183 comprised of tents, shanties, and prefabricated tiny homes showcased short sets of their music, proved especially moving, particularly for the uplifting effect it had on the players.

As Cole and Hippie sat for an interview in the shade of a side stage van, a resident named Jay performed a few songs of well-written melodic rap and trap. We were all impressed with his delivery. Asked how many of the roughly 200 people who occupy the property at any time they’d consider artists, the pair agreed 20-30. 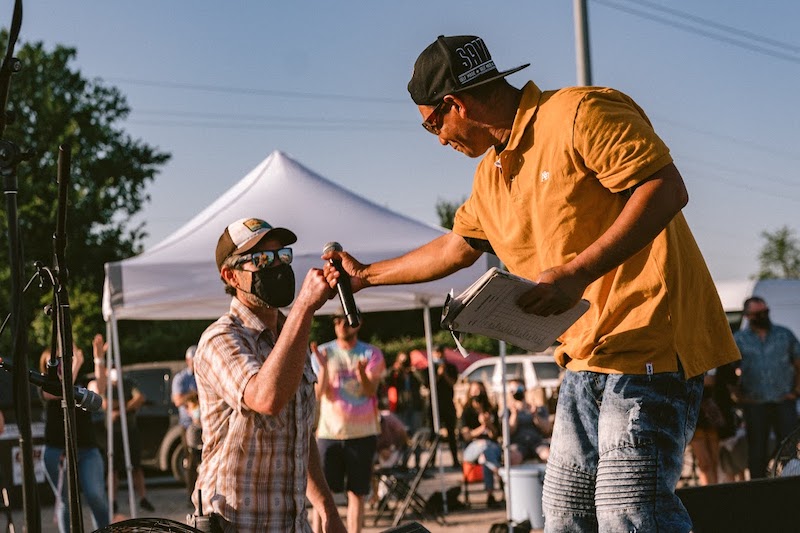 “There’s so much art and so much talent, and it needs to be tapped into,” said Cole, who designed the show’s poster and serves as a muralist with Esperanza operators The Other Ones Foundation.

“You don’t have to get ground under,” said Montgomery. “You can come to a place like this.”

The one-name painter moved to Austin a year ago with his wife to run a flop-house motel and then, for the last 7.5 months, ended up living in Esperanza, which he notes being much better than “living under a bridge.” The self-described “prog guy” played angular compositions on a heavily painted nylon-string guitar.

The latter, a resident liaison at Esperanza, showcased a scrappy set of country-folk songs he puts out as Catfish Defence Force, including a memorable tune titled “Hotbed of Hidy-Ho.” An entertainment lifer, he worked one of the country’s last traveling tent shows, the Schaffner Players, in the Seventies. He also roadied and stage managed in Austin, worked at the cable access channel ACTV, and did production work in Los Angeles, where he featured in a gag on American Idol in 2013 that found him pretending to replace Jennifer Lopez as a judge. Though he counts career options and close relationships with musicians, he reveals he’s occasionally without shelter.

“Where being out there is the problem, being in here is the answer,” he says of The Other One Foundation’s Esperanza Community. "These guys have been pushing hard and it’s the right answer. We can break the chain of the landlord. Everybody gotta live someone and we all want to live in a nice place, but if you can’t, where do you go?

“In a former life, I worked a lot of music festivals,” Other One’s founder and Executive Director Chris Baker offered in a speech.

“You don’t have to get ground under. You can come to a place like this.”

The sanctioned encampment, where domiciles range from tents surrounded by pallet fencing to the semi-permanent shelters the UN Refugee Agency supplies internationally, wouldn’t strike visitors as a downer. Many of the residents appear outgoing, their dogs seem friendly, and there’s an air of industriousness in a scene where salvaged objects are both employed for function and decoration. Stewarded by The Other One’s Foundation and a leadership council of residents, Esperanza’s dwellers have access to showers, case management, a community kitchen, and work opportunities.

“In a former life, I worked a lot of music festivals,” Other One’s founder and Executive Director Chris Baker offered in an on-site speech Tuesday. “The first time I came to this camp I was like, ‘Well shit, this is basically a music festival.’ Now we’re having one.”

While on the mic, he also told attendees, “We believe that access to shelter, air conditioning, food, heat, and water are human rights” and urged a vote against the soon-to-be-voted-upon Prop B, which makes it a criminal offense to camp in public areas or panhandle.

Baker praised Onion Creek Productions for holding their event in an “informed way” and noted that they paid residents for help setting up and working at the concert. Food provided by Jazz Mills’ Free Lunch program was served to both visitors and residents. Onion Creek founder Aaron Brown directs upcoming local film Home Free about he and writer/ producer Lenny Barszap’s experiences at UT in the late Nineties, when they opened their rental home to a houseless man named the Professor and his crew of friends. 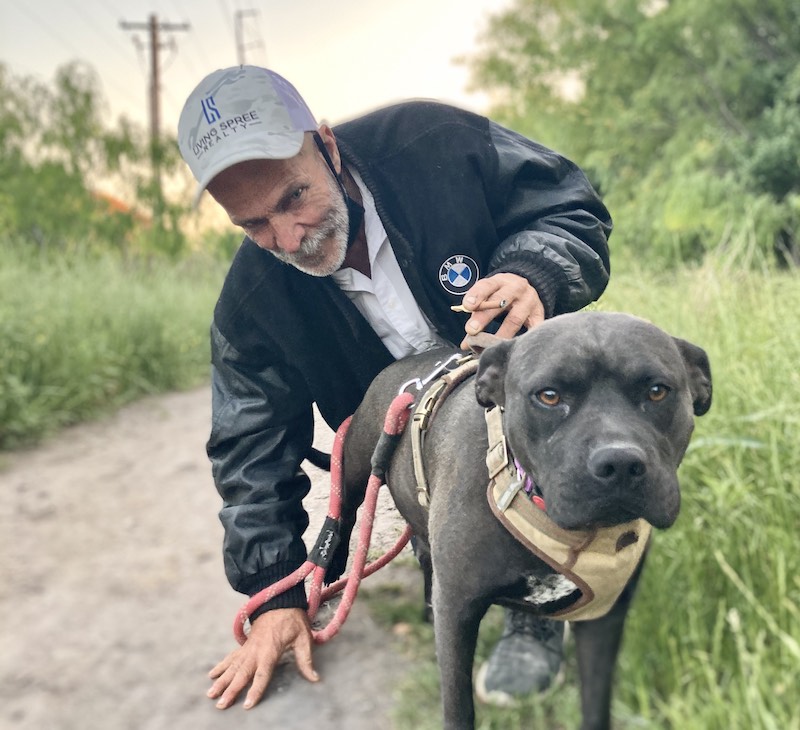 Eddie Edwards and his pregnant pooch. (Photo by Kevin Curtin)

Late in the evening, walking around the seven-acre grounds, I ran into another resident who had performed: Eddie Edwards, a man who’s proudly moving away from his long-held nickname, “Fast Eddie.” The former Corpus Christian, who landed in Austin via Greyhound in September, abhorred sleeping on the sidewalks downtown prior to moving into a corner spot at Esperanza, where he’s constructed a kitchen and living room. He’s busked since 2017, but dreamed for decades of having a real stage for his cleverly-worded folk tunes with rough vocals, which he’d achieved that afternoon in addition to gratefully earning money helping set up the Been There event.

“I’ve been our here for a while, but I think I’m about to be put out,” he predicts. “I believe this is divine appointment. Look where the stage is set up – right in front of my spot! I expect something to come of this. I don’t know what, but I think it will be meaningful.”

Before we parted, he reiterated one chorus he sang through the big speakers earlier, a lyric he says represents the way he looks at life and the importance of keeping his word: