Initially a blink in the Nineties zeitgeist of Austin music, Living Pins forged a duo between Sixteen Deluxe’s Carrie Clark and Ursa Major’s Pam Peltz. The group now returns after a quarter-century absence with a four-track EP in tow. Over Easter weekend, Clark and Peltz got properly caffeinated and responded to a series of emailed questions. 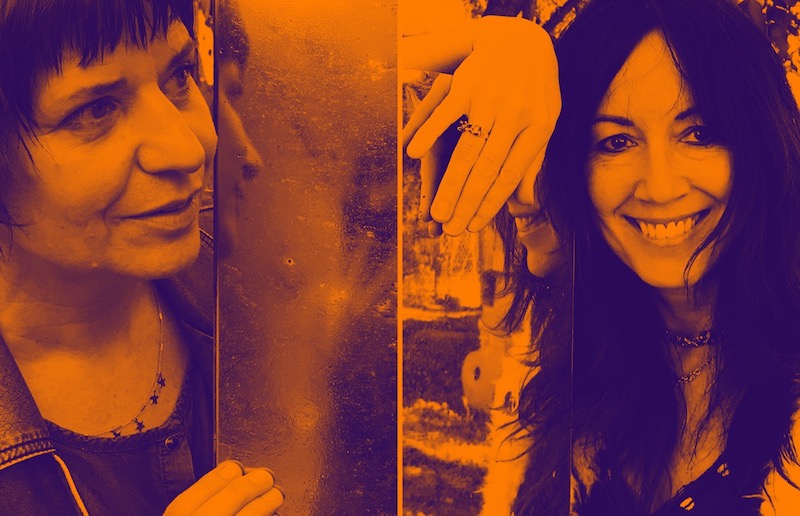 Austin Chronicle: You formed Living Pins in 1996 and the project went dormant not long after, with the apparent sole recording existing on a 1998 Wheatsville Co-op compilation alongside appearances from your primary gigs at the time, Sixteen Deluxe and Ursa Major. There were plans to revive Living Pins in early 2020 that were dashed with the onset of the pandemic. First, what were your thoughts and feelings surrounding the reformation of the group after nearly 25 years and how did it come about?

Pam Peltz: The resurfacing came about one night when Carrie and I were both at a cocktail party at the house of Lyman Hardy (Pong, Ed Hall, etc.) – probably late 2018. We were in the kitchen fumbling with ice cubes and tongs and Carrie just asked, “Why don’t we do Living Pins anymore?” And I said, “I have no idea. Let’s do it.” We probably jammed later that week.

“At a certain point you just realize that rock & roll is eternal. You look in the rock mirror and it looks back at you and says, ‘Rock on, my friend.’” – Pam Peltz

Carrie Clark: It was like the baby bird in the nest calling attention to itself. No need to make a new baby bird.

AC: How did the pandemic influence or change your process of writing and recording? Were recordings already planned or did the last year organically shape the songs into how they are presented today?

CC: It focused us. And the limits of the pandemic made us distill what it was that we both felt was a good song. And the funny thing is, the idea of recording was already planned with Jeff [Copas] and the Living Pins as a twopiece. He came to our show at Nomad Bar in February 2020 right before the lockdown. We were all chatting out on the patio about making a recording.

PP: And then sometime early last summer when activity was really minimal we realized, “Hey, we can still do that.” So the three of us had a masked outdoor coffee meeting to strategize the recording sessions.

AC: Carrie, aside from playing in 16D with bassist Jeff Copas, your respective discographies intertwine quite a bit. You both played in Elevated Lines about a decade ago, joined by Medicine’s Matt Devine, who guests on the new EP. With both you and Pam at the helm of Living Pins’ songwriting, do you both now see it as a continuation of what started in the mid Nineties or as an evolution of experiences you’ve gained since the project was placed on hiatus?

CC: We mostly played cover songs back in the Nineties: T. Rex, Syd Barrett, the Kinks. The Living Pins wasn’t the primary band for either of us. It was a second fun band for us just to let off steam, so we didn’t really approach it as songwriters.

PP: When Carrie and I started playing again, we just automatically started writing original songs for some reason.

CC: I saw Pam play “Raven” at a solo show and it sounded like a T. Rex song, so I wanted to do it and head in that direction.

PP: The other three songs on the EP are the ones that were most pulled together and groomed at the time we were recording.

PP: Also, at a certain point you just realize that rock & roll is eternal. You look in the rock mirror and it looks back at you and says, “Rock on, my friend.”

“I saw Pam play ‘Raven’ at a solo show and it sounded like a T. Rex song, so I wanted to do it and head in that direction.” – Carrie Clark

CC: As far as the Jeff connection goes, all that time spent on the open seas with your pirate friends is more valuable later on than you ever realized at the time. We knew that Jeff was going to “get” us – that we weren’t going to have to explain anything to him. Jeff, if nobody else, understands the meaning of rock.

AC: Once things clear up and it’s feasibly safe to play anywhere, anytime, what do you see for the future of the band? The EP has qualities of psych groups akin to the Brian Jonestown Massacre, so would you push for staging in an Oblivion Access (née Levitation) type of festival setting, or will you content yourselves as weekend warriors?

PP: Good question, because I love BJM and Black Angels and that’s the scene that you’re talking about.

CC: In order for our sound to make sense live, there needs to be an addition of other players. During the pandemic, adding other players has been, uh, limited … hence, Brian the Drum Machine being the third band member on the EP. But we see more humans on the stage soon and that sounds like a festival scene to me.

PP: As to the future, we don’t think too hard about the way things will specifically play out because they never happen that way anyway. It’s like traveling. When you hit the ground, just have a map in your pocket, ’cuz you never know where you’ll end up.