“I smoke a lot of pot, keeps from killing people or getting killed”

“It’s sitting right down there a little ways,” pointed Willie Nelson when asked if he missed being on his tour bus this last year. “And every now and then I go and sit in it, just to pretend I’m going somewhere.” 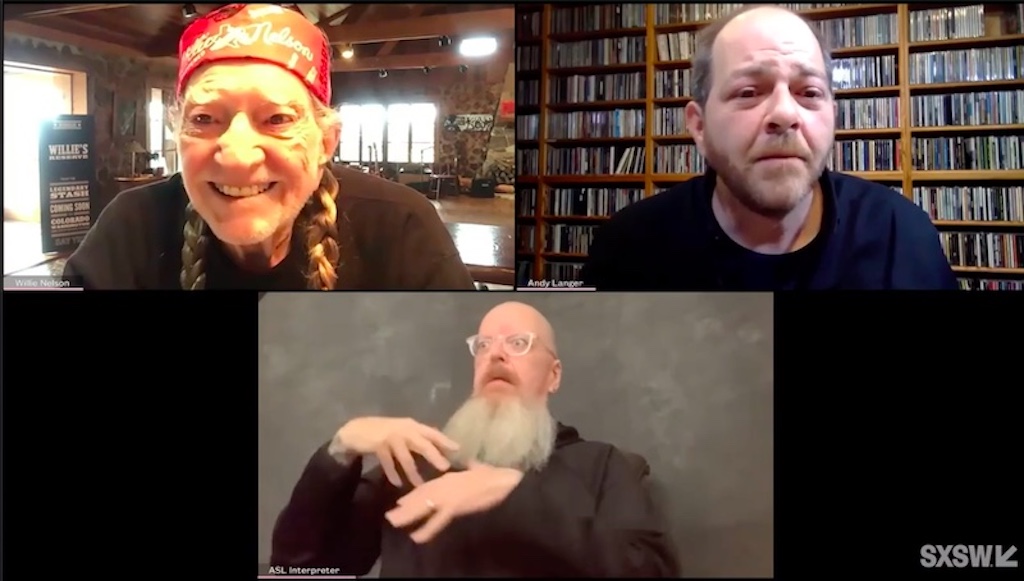 Sign Language: Nelson, Langer, and their interpreter for the hearing (or otherwise ... ) impaired (Photo by Kevin Curtin)

As much as COVID-19 altered everyone’s existence, country music’s grand old Texan, 87, underwent his own stark lifestyle change over the last 12 months. After the near constant touring of his last six decades, he hasn’t performed a show since last March. That much downtime is unprecedented.

If nothing else, it opened up an opportunity for his debut as a South by Southwest speaker – from his personal studio in Spicewood. As interviewer Andy Langer pointed out, Nelson agreed to deliver the 1992 SXSW keynote, but his bus didn’t make it back in time for the 10:30am speech. He did stage a surprise show that night at Auditorium Shores.

“Here’s what I believe: God is love and love is God. You can’t have one without the other.”

From the get-go first thing Wednesday afternoon, Nelson revealed his sharp sense of humor. ACL Radio personality and Texas Monthly reporter, Langer referenced a joke his subject told him two decades ago about nuns riding bicycles around the Vatican. Without pause, Willie jumped in:

“One of the nuns said, ‘I’ve never come this way before,’ and the other one said, ‘Me neither, must be the cobblestones.’”

A small portion of the 38-minute conversation dealt with Nelson’s present state of affairs. He misses the “energy exchange” of performing live, but says he won’t hold concerts until it’s safe for everyone. Beyond his second collection of Sinatra covers, That’s Life, which came out last month, he’s tracked an album with his musician children and Sister Bobbie that he intended as a gospel collection but ended up being a “family record.”

More of the fast-paced conversation found Langer mining for axioms, principals, nuggets of wisdom, and the secrets of Nelson’s Zen-like vibration. In turn, the sage’s responses proved clever, quotable, and concise.

More of the fast-paced conversation found Langer mining for axioms, principals, nuggets of wisdom, and the secrets of Nelson’s Zen-like vibration. In turn, the sage’s responses proved clever, quotable, and concise – often shorter than the question itself. No one topic yielded particular in-depth revelations, but the summit covered a great deal of ground. Friendship remains nearly priceless (“a good friend is worth more than a million dollars”), and you can’t escape religion:

“Here’s what I believe: God is love and love is God. You can’t have one without the other.”

It served as a perfect primer for a widespread remote audience. As a result, the highly engaged stream of comments that accompanied the interview buzzed with “Amens” and “Willie for President” as well as copious compliments on Langer’s interviewing, which several commenters likened to a “master class.”

Nelson also somewhat demystified himself at times, acknowledging his own temper and occasional lack of patience. When Langer asserted that, “We think of you as this Yoda-like, part-Dalai Lama figure,” Nelson interrupted.

Asked how he keeps his temper in check, the answer made good sense amongst sometimes senseless times.

“I smoke a lot of pot, keeps from killing people or keeps me from getting killed. Also, think positive. That helps.”