p1nkstar didn’t exaggerate when she billed her latest project as a live music video “experience.” Girls Like Us, which premiered on Hotel Free TV Thursday night, Jan. 28, seamlessly stitched together pre-shot performances by seven Texas-based trans artists in an hour that both recreated the live experience and transcended it.

Superstars & Glitter Queens: p1nkstar and friends brought music video polish to the livestream of Thursday’s Girls Like Us (Photo by Carys Anderson)

Directed and produced by the local pop star and her frequent collaborator Y2K (Artie Moreno), last night’s livestream played out more like a well-crafted film than a virtual concert. Rather than single-camera streaming from an empty club or a dingy living room, Moreno’s custom-built sets, lights, and Director of Photography Hannah Varnell’s 360 pans brought immersive light to the production.

A futuristic aesthetic commenced from the first notes of synthesizers. All in white with masks to match, p1nkstar and dancers Jordan Harris, Katherine Vaughn, Charlie AB, and LB Flett opened the show with three performances of Auto-tuned electronica and bilingual dance music. Y2K kept the energy up, trading bars with rapper BabiBoi on her latest single, “World Destroyer.”

Dallas darkwaver Lorelei K offered a dreamy comedown. Bathed in white light, accompanied only by a guitar, the singer’s reverb-drenched vocals whooshed in a gothic siren song. It only made sense that she’d end her otherworldly segment by walking through a door to oblivion.

A dance break from Girl6 (Natalie Sanders) soon primed viewers for Quentin Arispe’s smooth soul, where a full band slowed the program to a cool groove amid pop bravado. Then, when the beat-drop hyped Arispe up, Belladonna followed suit, whispering dirty one-liners over heavy synths.

Costumes, choreography, sets, and the music itself throughout the hour didn’t merely grasp at missing nightlife. It exhibited these artists’ crafts. Meanwhile, the diversity of the bill highlighted the richness of the community from which it creators spring.

The program peaked at close, when everyone joined together for a performance of its title track. HD footage cut to lo-fi, behind-the-scenes shots of the crew – breaking the show’s high-polish spell for a welcome look into the process.

“You just wanna be like us,” sang p1nkstar, a full-on dance party raging behind her.

With that, the show achieved its mission: an upbeat celebration of queer art. 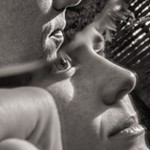