For a moment in the Seventies/Eighties, the virtuosic roots triad of Walter Hyatt, David Ball, and Champ Hood alchemized the hottest act in Austin. Although their run proved brief, intermittent, the influence of Uncle Walt’s Band reached deep, counting fans in everyone from Lyle Lovett and Jerry Jeff Walker to Nanci Griffith and Jimmie Dale Gilmore. The trio officially disbanded in 1984, but their blend of string band, progressive country, and jazz swing tied together by distinct, three-part harmonies remains captivating. The band’s sparse discography received re-issue in recent years, most notably with 2018 Omnivore Records anthology Those Boys From Carolina, They Sure Enough Could Sing. Yet Uncle Walt’s Band sounds best live, and a new generation can get a taste of the old Austin magic next week with the release of Recorded Live at Waterloo Ice House.

The album resurrects the group’s 1982 platter Recorded Live, which only came out privately on their own Lespedeza imprint. Seven tracks recorded at their legendary Austin residency get re-upped on the new live album. The real draw is 10 previously unissued performances, along with four alternate takes.

Check out the full cull below, as well as the newly unearthed video of UWB at Waterloo Ice House in a 1990 reunion show, laying down Fats Domino’s “Honest Papas Love Their Mamas Better.” Video comes courtesy Ivan Brown. 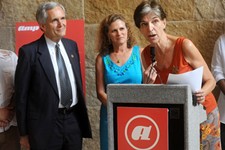 Marcia Ball Enjoys Her First Summer Off Since 1984
“It gets hot in Austin in the summer, did you know?”