It looked like a secondary stage at ACL Fest. Saturday’s Let Us Worship concert on the shores of Lady Bird Lake saw hundreds of overwhelmingly maskless attendees amass for a performance led by touring missionary Sean Feucht. A rep for the Austin Center for Events says no permit had been issued for the gathering. 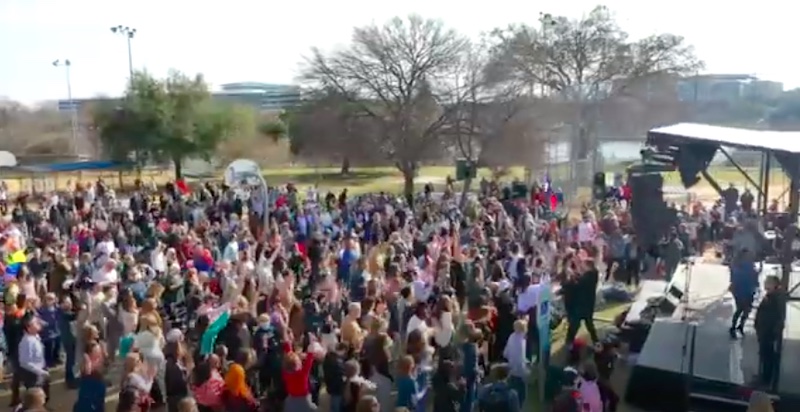 A screengrab from the YouTube video, posted by Sean Feucht, documenting Saturday's Let Us Worship concert.

The acoustic guitar strumming Feucht, a California-based preacher and Republican politician who advocates against COVID-19 lockdowns, has been holding increasingly controversial Let Us Worship pop-up concerts since July. The first of his 2021 events was initially promoted to be held at Auditorium Shores last Saturday afternoon.

“We showed up this morning and Austin had barricaded the park we were in,” he explained in a social media video that day. “So we moved down the road, right next to the river at Edward Rendon Metropolitan Park and we’re ready, baby!”

The sight of a festival-style stage being erected on city parkland puzzled people using the hike and bike trail, given that Austin has been in Stage 5 restrictions for over two weeks and our health care system is projected to hit capacity, necessitating the opening of a field hospital at the Austin Convention Center.

The ensuing event, which organizers documented in a YouTube video that includes drone shots showing the size of the audience, attracted several hundred attendees who are shown closely gathered, hugging, touching each other’s faces, and being baptized in the river.

In a social media post that afternoon, Feucht wrote: “The church is not hiding in fear in 2021!!!!” The narrative of Christian persecution is a frequent refrain for the recording artist, who’s a worship leader at Bethel Church in Redding, Calif.

If you’re wondering how, when outdoor gatherings are limited to 10 individuals, Let Us Worship organizers were able to require the necessary permits to stage a large concert on city property – the answer is: they didn’t.

Sara Henry, a public information officer for the Austin Center for Events (ACE), tells the Chronicle:

“No permits were issued for this event. We are disappointed that these out of state event organizers did not adhere to the polices we put in place for the protection of our community. We attempted to discuss our concerns with the event promoters and organizers, but our communications were not returned.”

She specified that ACE became aware of Let Us Worship’s Austin concert through online promotion and reached out to organizers, but received no response. ACE is currently not permitting any festival like events.

While the public health consequences of having hundreds of maskless people interacting in an environment without social distancing protocols are obvious, the legal consequences – in this situation, at least – are less so. Henry says that ACE officers showed up and monitored the event, but did not write a ticket that day.

"No citations were issued at the time of the event, but we are exploring options to hold the event organizers accountable for violating our permitting requirements," Henry says.

"The City of Austin urges everyone to stay home and stay safe," the ACE representative added in a statement. "Area doctors and local health officials strongly advise against gathering outside of the household and say we cannot risk the consequences of a mass gathering. Austin Public Health data shows the community is experiencing record numbers of hospital admissions, hospitalized patients, and patients in the ICU due to this pandemic." 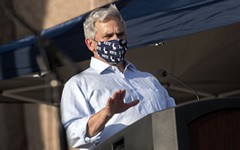