“I went over to meet her, and I couldn’t hear a word she said, but she seemed nice!” Those words, or variations of such, resounded like a jukebox favorite at Ginny’s Little Longhorn. As owner and proprietor 1993-2013, Ginny Taylor Kalmbach, who passed away on Wed., Dec. 30, 2020, rarely spoke above a few decibels. 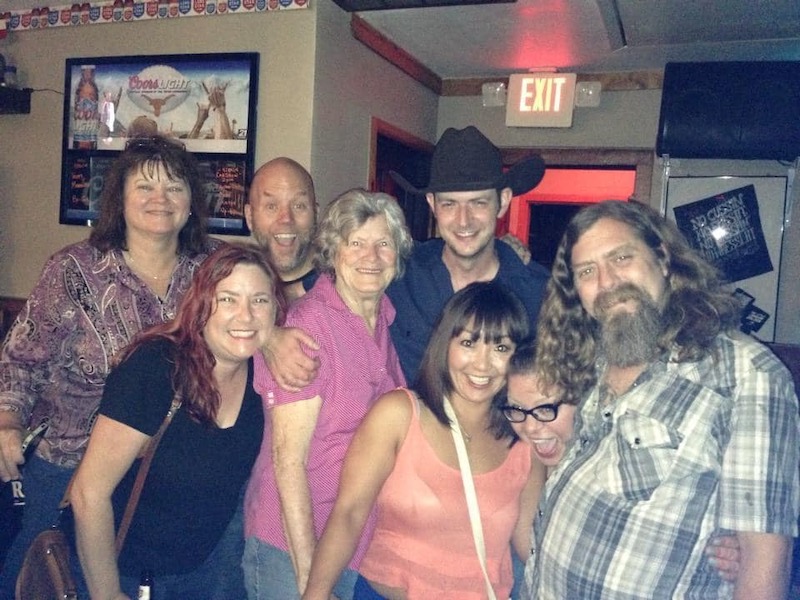 Ginny wasn’t unfriendly or shy. She was funny, generous, kind, and many other things to many other people. One thing she definitely was at Ginny’s Little Longhorn: in charge. Ginny didn’t speak loud because she didn’t have to. That, and she wasn’t the type to shout – even over the din of a Saturday night honky-tonk band at full throttle.

Ginny Taylor started bartending at Dick’s Little Longhorn on Burnet Road in the Eighties. After her many years of service, Dick Setliff bequeathed the bar to Ginny when he died in 1993 and thus was born Ginny’s Little Longhorn Saloon. As a bartender at Dick’s, she’d met and fallen in love with a regular, a tall cattle rancher named Don Kalmbach. The two married around the same time Ginny got the bar.

Ginny and Don ran Ginny’s Little Longhorn as partners. It could fairly be said Ginny was the “boss” and Don the “muscle.” Nothing but tenacity and a deep love for true honky-tonk music made it into a home base and hub of roots country music in Austin from the mid-Nineties well into this millennium and beyond. 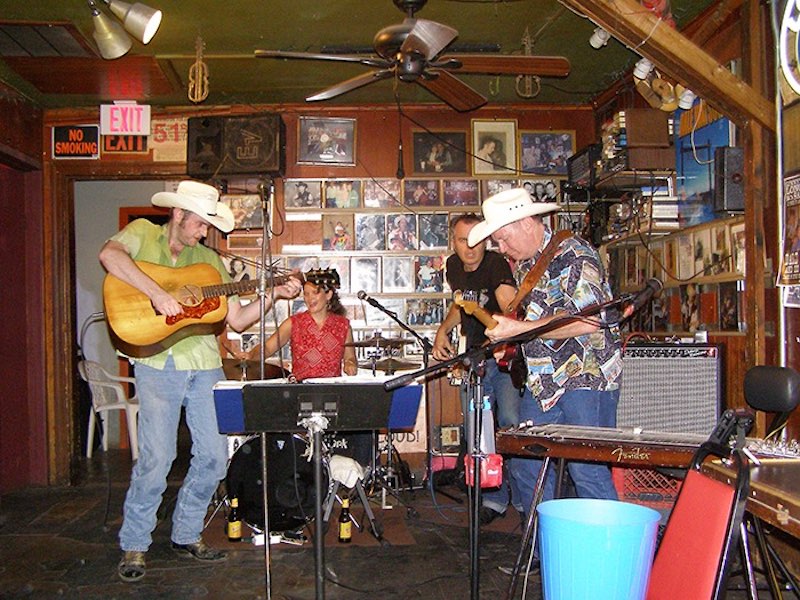 I was fortunate to be part of the original first wave of musicians to make Ginny’s our home during the mid-Nineties, along with artists like Dale Watson, Teri Joyce, Jim Stringer, Justin Trevino, Ted Roddy, T Jarrod Bonta, Karen Poston, Susanna Van Tassel, Roy Heinrich, Jim McCord, and several others. All of these acts enjoyed weekly residencies there, seven nights a week and rotating weekends. As the reputation of Ginny’s grew, so did the demand for gigs.

Nights in the small, shotgun-style beer joint were packed, sweaty, and full of that indescribable “juice” of good energy.

Regulars playing Ginny’s proved a true top-shelf of honky-tonk artists based in Austin and around Texas. Aspiring and sometimes established performers sang a common refrain in those days. And received an equal response:

“Hang out at Ginny’s, and get to know Ginny.”

Those first days at Ginny’s Little Longhorn are impossible to adequately recount or put into real context, as any denizen of a “you just had to be there” moment in time can attest. Starting at 10am after their night shifts, the daytime regulars arrived, an older, blue-collar crowd and true lovers of old-school country music, many with encyclopedic knowledge and requests for great songs that made musicians do their homework instead of rolling their eyes. Then there were the large scale, intense games of dominoes at the back tables.

Regulars like Geneva, Ginny’s devilish partner in crime, the omnipresent Cowboy, and John E. Bush (not that one) could rattle off songs, artists, insults, jokes, demands, and requests in the same breath. There was a moment in time when Ginny’s became a mix of VFW Hall “blue hairs” and fresh-faced tattooed youth, which added up to that signature vibe of what Austin music has always been about. In those days, Ginny’s had it in abundance. 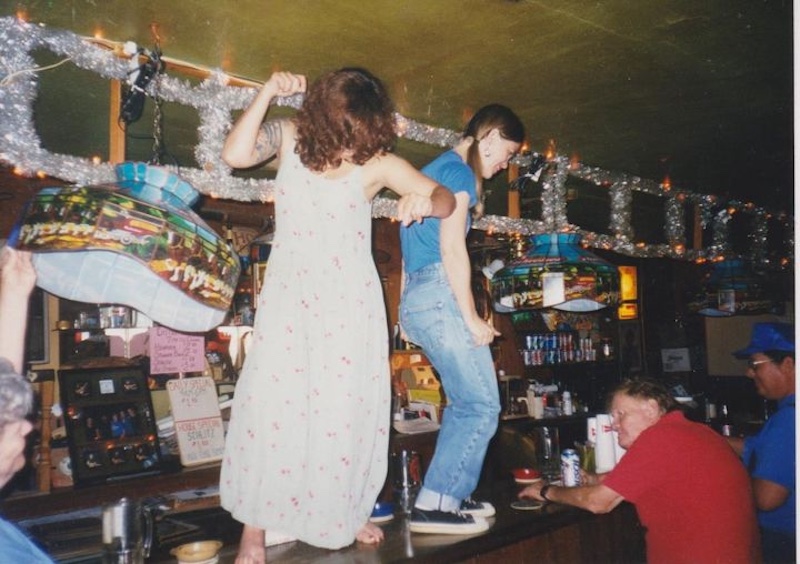 Author’s Note: “[That’s] Kris Mason Wallace (my-ex wife, now deceased), and Teri Joyce (r), probably around 2002. Check out Ginny off to the side holding back the bar lamp!” (Photo by Don Kalmbach)

The nights in the small, shotgun-style beer joint were packed, sweaty, and full of that indescribable “juice” of good energy. Stellar music, dancing, drinking, smoke-filled air, love affairs, fights, breakups, makeups, and everything in between occurred. I personally met lifelong friends there, far too many girlfriends, and a wife.

The level of late-night good times to be had in the gravel parking lot out back was legendary and prolific. It truly became a family, a home base, a playground, and a workplace for both musicians and patrons alike. It became a place where you went to see and be seen, and never had to ask beforehand who was playing that night. You went because it was Ginny’s and it was going to be a good time no matter what.

Starting at 10am after their night shifts, the daytime regulars arrived, an older, blue-collar crowd and true lovers of old-school country music, many with encyclopedic knowledge and requests for great songs that made musicians do their homework instead of rolling their eyes

All the while, Ginny was just Ginny, everybody’s mom, grandma, boss, friend, and cohort.

You could usually find her stationed in her standard perch behind the bar, an oversized barstool with the perfect vantage point for all goings-on at all times. She worked the bar, she passed the tip jar twice a set like clockwork (and woe be to ye who did not tip), she bussed tables, she cuffed troublemakers, she hugged us, laughed with us, and most of all, she loved the music. She loved us, and we loved her.

It was home. It can’t be said any more plainly than that.

Ginny’s continued to grow in reputation to nationwide and even worldwide fame in the roots music and honky-tonk world. Ginny’s Little Longhorn on Burnet Road in Austin was on the map. It was featured in documentaries, and its praises sung in new honky-tonk standards. It became recognized the world over as a true hub of the roots music scene, and the influence of Ginny’s Little Longhorn, and Ginny and Don themselves, was felt and shown deeply in our little wide world.

We were all shocked and saddened at the sudden death of Don Kalmbach in 2002. Ginny’s suddenly lost its right arm and we didn’t know what would happen. Ginny being Ginny, she soldiered on.

Her daughter Sharon, as well as her granddaughters, came to help run the bar and pick up the slack where Don left off. Although it was never the same as it was with Don around, the music and life continued to thrive at Ginny’s for another decade and beyond. She started the now-famous Chicken Shit Bingo, which became their flagship event every Sunday, and still keeps the bar going strong.

Ginny and Sharon eventually gave up their stake in the bar several years ago, but it’s still in the capable hands of Terry Gaona, who was also a long-time friend and patron of the bar.

As I tried to figure out what in the world to say about the loss of my friend, once surrogate mom, boss, and fellow lover and liver of real honky-tonk music, Ginny Kalmbach, I wondered what overall story to tell. In that process, I realized that it wasn’t about a “story.” In fact, that was the beauty of both her and the place she built for all.

She held that place for us the way Hank Williams held a song. It wasn’t about the bells and whistles. It was about the feeling and life and love you can pack into four walls.

Virginia Taylor Kalmbach achieved what most of us can only hope for: a legacy. We will always love her for it, and be profoundly grateful to her for letting us all share in it.