Nakia Cuts Back on Advocacy to Focus on Music

Nakia Reynoso, the queer blues and pop singer whose career broke with a streak on NBC’s The Voice and later became a “voice” of local music advocacy, tells the Chronicle he’s dialing back his day-to-day duties as president and unofficial spokesperson for nonprofit Austin Texas Musicians. 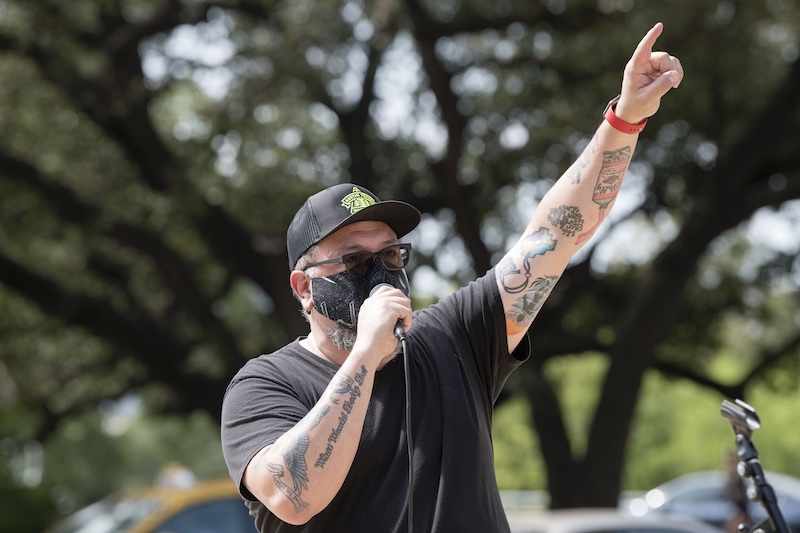 Nakia addresses a Come & Save It rally at City Hall on September 28, 2020 (Photo by John Anderson)

He’ll remain an involved board member in the organization he founded as a Facebook group in 2009 and has since grown to include almost 5,000 members, but will step down as its leader sometime this year. He wants to spend more time focusing on music, theater, and scoring, and looks forward to not doing interviews about music politics every day. It’s a transition he originally planned to make in 2020 before the COVID-19 pandemic forced music representatives to double down on funding efforts.

The 45-year-old Austinite acknowledges that he’s seen the constant uphill battle of music advocacy wear others out over the years.

Reynoso says the main thing he’s learned from advocacy is that if you actually show up and talk to people, you can get things done.

“I don’t feel like I’m burning out so much as I’m taking break and I’ve fuckin’ earned it,” he laughs. “My heart is always going to be in advocacy, but I’ve gotten to the point where, as an artist and as a human, I deserve a break from having that be the day-in and day-out of what I do. Let’s give other folks some time to talk and me some time to sing.”

Austin Texas Musicians, which essentially pushes for musicians to be part of important civic and economic conversations and thus influence policy, will continue to be guided by Executive Director Pat Buchta and board member Sonya Jevette. Reynoso also believes they’re fostering new leadership with their Musician Advisory Panel. Asked what he identifies as the organization’s most significant accomplishments during his tenure he pauses.

“I would say the most lasting thing that we’ve been instrumental in helping with was defeating Prop B so we could maintain a Live Music Fund,” he offers. “We came on board excited to get to work on the Live Music Fund, then had to shift gears when people were fighting to take it away. It has $4 million in it now and they expect it to bounce up pretty quick when the pandemic’s over and people start staying in hotels again.

“The other thing is the SAVES [resolution and ensuing venue funding]. We were instrumental in that, along with Amplified Sound Coalition, plus all the work Cody [Cowan] was doing behind the scenes.”

Reynoso says the main thing he’s learned from advocacy is that if you actually show up and talk to people, you can get things done.

The singer, pianist, and bandleader has been itching to explore his early love of musical theater. In fact, when the pandemic hit the U.S., he was in New York City at an acting workshop where he contracted COVID-19. In addition to Broadway goals, Reynoso calls scoring shorts and shows a “wildly exciting” creative process that he’s more recently begun to work in. Meanwhile, he plans to release a steady stream of music.

Today marks the release of new track “It’s Never to Late,” which he calls a co-write with 8-year-old Charlie Cotton, the son of singer and actress Savannah Welch. Reynoso says the song germinated in early 2020 when, during some 4am social media scrolling, he saw a Facebook post from Welch were she quoted her son’s innocent wisdom: “It’s never too late for things to get better for anyone.”

“I sat up and started singing into my phone and it became the chorus almost note-for-note,” he recalls.

The uplifting cut hits music outlets today. Half of the Bandcamp sales go to the SIMS Foundation, which provides mental health and addiction recovery services for Austin musicians. 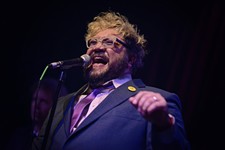