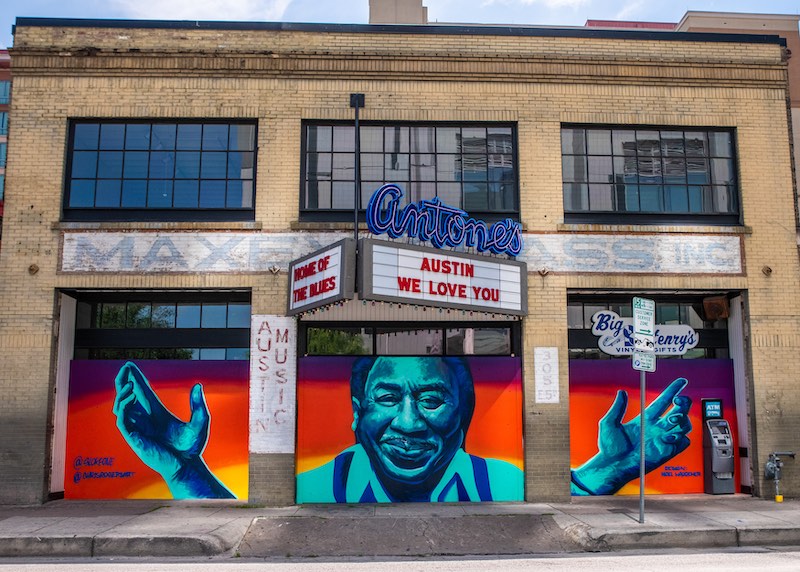 A mural optimistically titled "Everything's Gonna Be Alight" (painted by Sloke One and Chris Rogers and designed by Noel Waggener) that was on the front of Antone's in April. (Photo by David Brendan Hall)

Since applications opened for the Live Music Venue Preservation Fund last Friday, operators of 79 different venues have filed for assistance that could total up to $160,000 for each business.

The effort, a component of the City of Austin’s SAVES resolution, includes two phases: $20,000 of “emergency funding” and additional “enhanced funding” of up to $140,000 that would be doled out in monthly installments to qualifying venues based on a variety of factors.

The road leading to dedicated financial relief for Austin’s vaunted venue ecosystem could be characterized as excruciatingly slow, then improbably fast. Many clubs have been shut down or are operating in an extremely limited capacity since COVID-19 began choking out the concert industry in March. In that time, some music entities were able to secure grants through the Small Business Relief and Creative Space Disaster Relief programs – the highest allotment of which individually topped out at $47,500 – but a lack of venue-specified funding led to repeated protests at City Hall demanding a lifeline for Austin’s much ballyhooed stages.

City Council eventually passed the SAVES resolution on Oct. 1 and approved guidelines for the Live Music Venue Preservation Fund on Dec. 3. With astonishing quickness, given the typically measured speed of city programs, the Economic Development Department (EDD) opened up applications just a week later, with the Long Center acting as an administrating partner.

When asked about the speed of the council resolution being put into action EDD Chief Economic Recovery Officer Veronica Briseño replied, “In my 22 years at the city, I’ve never seen us move so fast.”

Briseño says that the $20,000 increments of emergency funding are still slated to land in the hands of venue owners in the waning days of 2020.

“We can commit to having the dollars out the door by the end of December,” she says. “We will be working hard to make that happen sooner – ideally by Christmas.”

As far as a timeline for the larger chunk of “enhanced funding,” Briseño envisions that money becoming available in January or February. That would follow operators of each qualifying venue meeting with professionals for a required technical assistance session, provided in partnership with Texas Accountants and Lawyers for the Arts.

In any regard, Briseño notes that it will benefit venue owners to get their application in sooner than later so they can sit down with a technical assistance professional and get the process started.

To qualify for the Live Music Venue Preservation Fund, a business must meet the city definition of a music venue. Established code breaks it down as: live music must be the principal function of the business, artists must be able to make money by playing at said venue, and the business must be able to check five boxes out of eight various requirements like “programs live music at least five nights a week” and “charges cover charge to some music performance through ticketing or front door entrance fee.”

In order to meet the criteria for “enhanced funding,” venue operators also must complete an Equity Strategic Plan. The Chronicle’s “Faster Than Sound” columnist Rachel Rascoe previously reported that: “music venues must work with racial equity consultant Joyce James on long-term plans for diverse booking, hiring, and outreach.” At a recent Music Commission meeting EDD Director Sylnovia Holt-Rabb characterized the equity plan as “unprecedented. The way we have structured this program has not been done in the U.S.”

$5 million in funding divided by a venue's maximum allotment of $160,000 would indicate that, at the very least, 31 clubs will benefit from the Live Music Venue Preservation Fund. That, of course, would be in the extremely unlikely scenario that 31 clubs would receive the total potential of funding. Briseño expects the number of recipients to be higher. She says they’re estimating 75-100 business will fit the definition of a live music venue and – because each venue has a different situation – the levels of funding will vary significantly.

Briseño also notes that the EDD is closely monitoring progress on the long-awaited federal venue relief package known as Save Our Stages (SOS). She sees the Live Music Venue Preservation Fund program’s technical assistance component as a potential way to help venues apply for SOS funding, which is expected to be administered through the Small Business Administration.