Checking In: Go Fever’s Acey Monaro Paints Houses Down Under

“So, so, so relieved about the outcome, can’t wait to get back now”

“Hello from the sunny, COVID-free East coast of Australia,” emailed Acey Monaro after the U.S. election from New South Wales, where the Go Fever singer and bandmate/hubby Ben Burdick fled. “My hometown is Maitland, and my mum still lives there. It’s a big country town in the Hunter Valley, which is all cows and coal, but just a train ride away to the beach.” 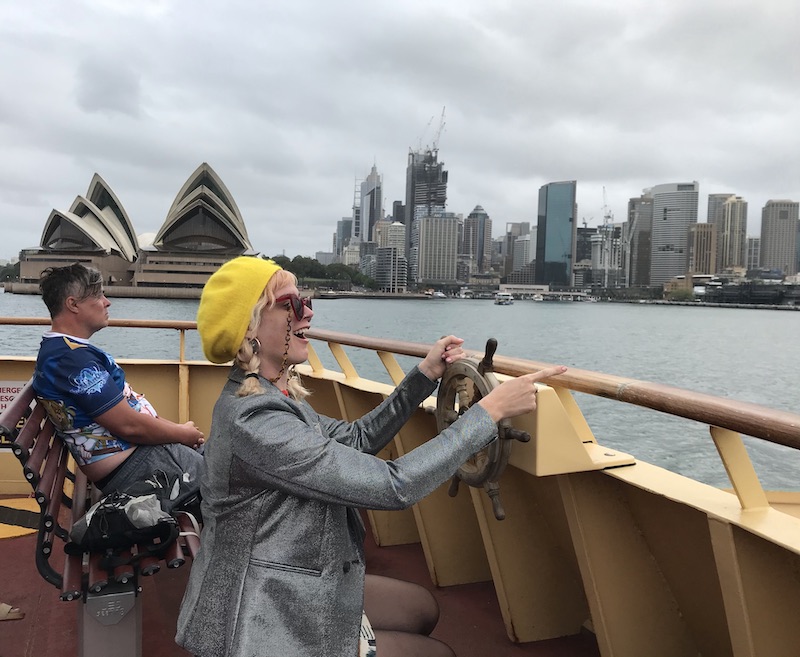 Acey Monaro: Ben and I put all our stuff in a Pflugerville storage unit (pro tip: way cheaper than Austin storage) and headed to Australia via California in October. We did our two weeks mandatory hotel quarantine in Sydney, where I wore out a track in the carpet pacing around the bed. It was SURREAL getting out and walking into a busy cafe.

We’re living in Newcastle, NSW, which is a beach town just a 30-minute drive from my hometown, with an old mate of mine who is a musician and activist and just all-around inspiring human.

“At the time of this writing, Australia is on day six of zero locally transmitted cases. There’s no mask wearing, but you’ve gotta check in with a phone app every time you enter a business (for contact tracing), and venues are still at limited capacity.”

Things are almost business as usual here: At the time of this writing, Australia is on day six of zero locally transmitted cases. There’s no mask wearing, but you’ve gotta check in with a phone app every time you enter a business (for contact tracing) and venues are still at limited capacity. State borders are slowly reopening.

Live music is just starting to pick up again but, very selfishly, I can’t fully rejoice in that while the rest of our band is on the other side of the world. Ben and I are working on demos for a new side project. I’ve started on an illustrated songbook that will be released with the new Go Fever record that’ll hopefully be like Aline Kominsky-Crumb meets [Alison] Bechdel’s Fun Home with half the technical ability but shitloads of enthusiasm.

AM: I bartended at Coconut Club and booked at Cheer Up Charlies, which both closed in the weeks following the cancellation of SXSW. So the first half of March was pretty bloody devastating financially and emotionally.

We were originally supposed to record our LP with James Petralli at Radio Milk in late March, but then of course that was cancelled. We were all feeling very lost and low at that point. James was very lovely and understanding, and we ended up rescheduling the session for June with just the five of us and Jim Vollontine as engineer.

We self-isolated and got tested in the lead-up. It was just unreal to be able to be together in a space like that for 10 days after months of separation. The last day was weird and sad, not knowing when we would be able to hang out together again. 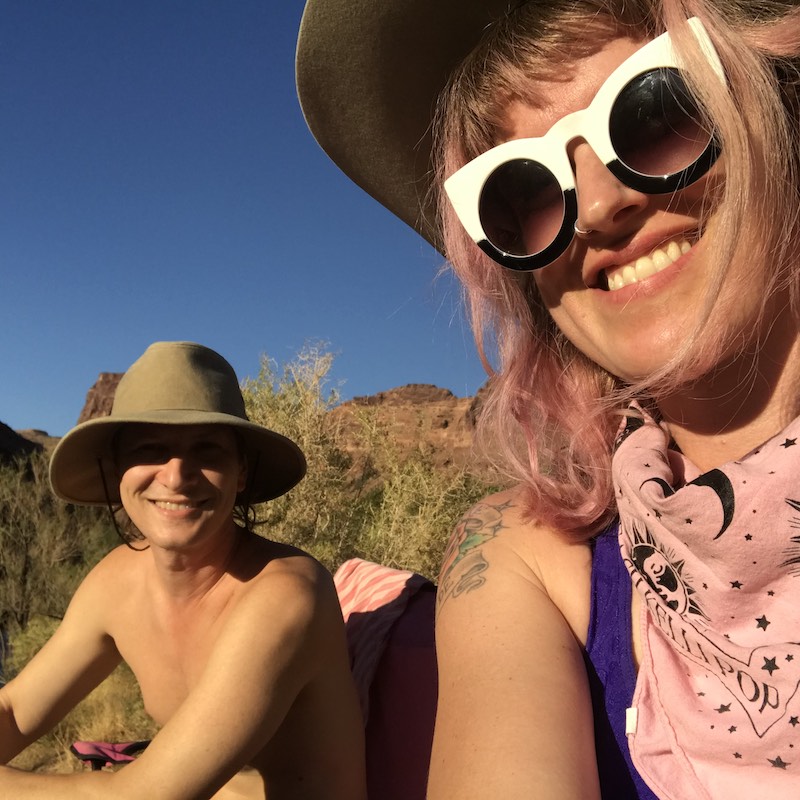 “When I think about music’s role for me personally in times of hardship, I see it as my mum, dad, best mate, and mentor.”

AM: It’s particularly devastating in a town like Austin, where live music is such a huge part of many people’s day-to-day experience. We know that you can be relieved of so much just standing in front of a band you love for 45 minutes. Anxieties are suspended, or transformed into a different kind of collective energy.

People with mental health issues and outsiders who feel unloved or misunderstood by their peers, their families, and their government can be lifted out of the shit on the confident shoulders of a good chorus or a lyric that grabs at their chest and those are the folks who are going to be weighed down the most by this interruption. In Austin, I’ve seen and felt the loss of a sense of community and identity in the wake of venue closures, permanent and temporary. On the other hand, communities can be unified through hardship, so I’ve been really stoked to see the resilience and imagination of musicians and promoters in navigating this new paradigm, like Mobley’s home delivered curbside, acoustic sets.

I hope the keenly felt absence of artists performing live gives rise to increased respect. Maybe we could do something really wild and radical like pay artists a fair wage when traditional venues reopen.

“Rock & roll and punk music probably saved me from suicide during some really low points as a young teenager.”

AM: I’ve returned to house painting, which I’ve done on and off for 15 years. The money is great, and the easier jobs can be cathartic, but I’m not sure which is more ruinous to my body: a big night on the sauce after a show or an eight-hour day of cutting in baseboards.

AM: When I’m really depressed, I forget to shower and listen to music, and the effects are more profound from the latter! Rock & roll and punk music probably saved me from suicide during some really low points as a young teenager. When I think about music’s role for me personally in times of hardship, I see it as my mum, dad, best mate, and mentor.

I listened to heaps of Junior Wells, Hound Dog Taylor, and T-Bone Walker during quarantine in Austin, because old blues is my musical comfort food. I’ve been listening to Parquet Courts’s last record, Wide Awake, nonstop since it was released, seems like. I write a lot of embarrassingly crap political songs that never leave my notebook and Parquet Courts inspire me to try harder.

“We know that you can be relieved of so much just standing in front of a band you love for 45 minutes.”

Donna Summer and Lizzo make me shake my arse, and can at least temporarily pull me out of any anxious state. We’ve been driving a lot and I unashamedly love blasting Green Day’s Dookie and Meat Loaf’s Bat of Hell on the road. I don’t understand the attraction to mid-tempo Seventies stuff for road trips!

I want my throat to hurt from shout-singing an hour in. Poor Ben.

Right now, I’m listening to the mixes of our new album and they’re making me pretty damn jazzed. I miss my best friends/ bandmates so much and listening to the album makes me feel closer to them. The one who annoys me most on tour is who I’m missing the most now. 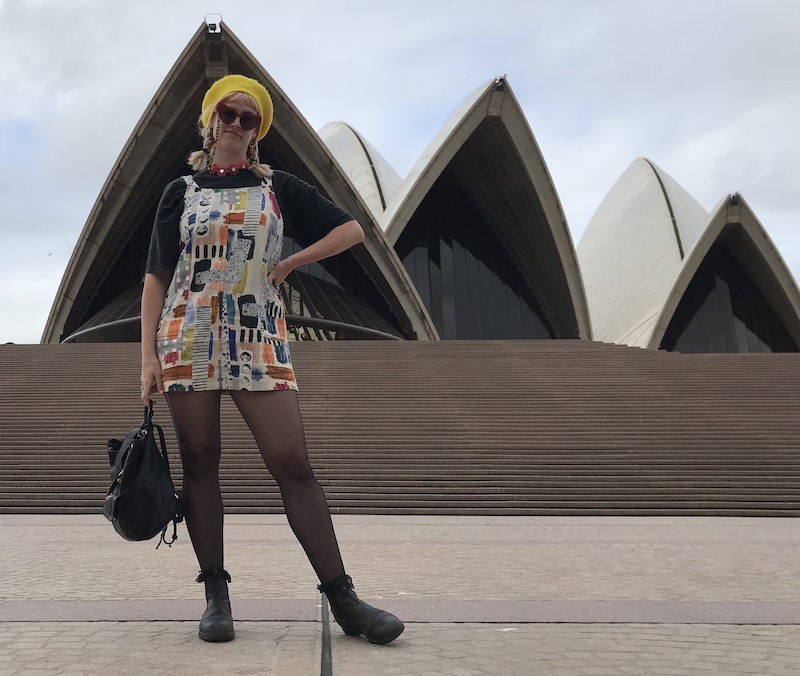 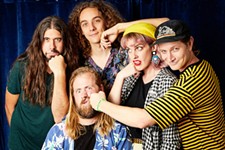 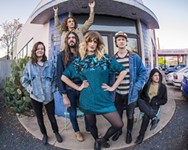