Fitting metaphor for a globally disastrous year, the term “dumpster fire” refers to a conflagration of incompetence resulting in a situation no one wants to touch. Saturday’s immersive percussion event of the same name, however, felt like a much needed purification ritual. 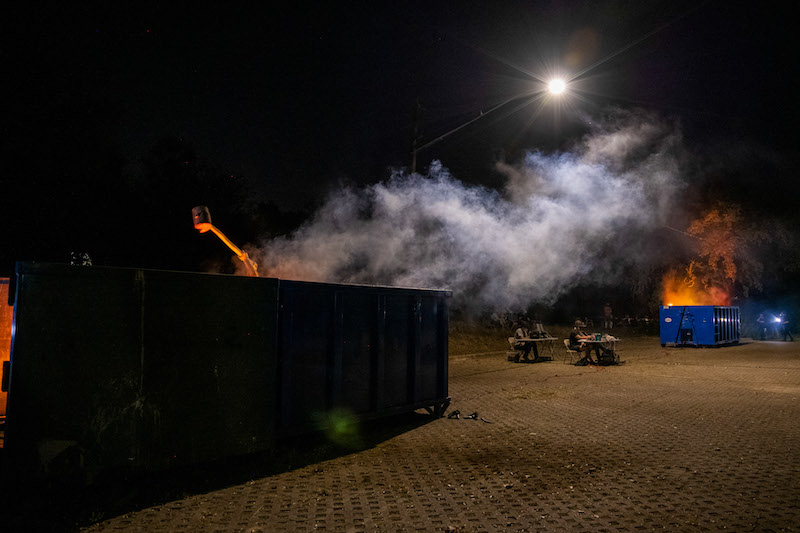 In the back lot of the dadaLab co-op, where about 80 people including a heartening number of families amassed to watch the evening proceedings, veteran ATX drummers and musical adventurers Thor Harris and Lyman Hardy donned work gloves outfitted with metal pipes on the fingers. The two multi-instrumentalists lightly tapped their metal phalanges centerstage before separating to respective waste receptacles. Hardy, known for his work in Ed Hall, Pong, and Total Unicorn, plus a career in film post-production, first settled into a beat by hitting the palm on the dumpster, then rattling his fingers across it.

Turns out there’s a surprising variety of sounds you can get out of a dumpster, its frame making a higher pitch when struck, while the larger body resonates lower. 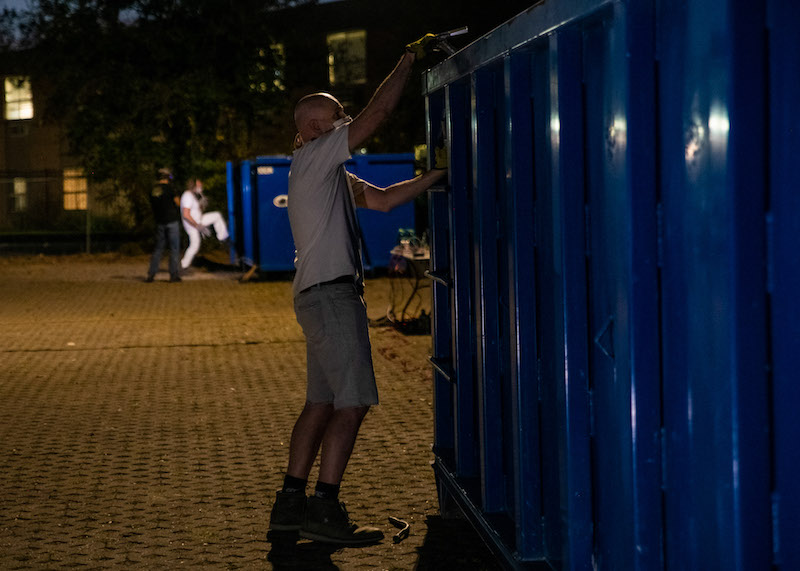 Lyman Hardy playing the outside of a dumpster with a homemade percussion gloves. (Photo by David Brendan Hall)

The two percussionists pushed the limits of dumpster sonority over the ensuing 45 minutes presented by the Rolling Ryot collective. Across the parking lot, Harris produced two hammers and began striking rhythms on a blue steel behemoth, occasionally kicking the hinged-door into the container’s side wall to booming effect. By then, Hardy stood inside his dumpster hammering away at the inside rim.

The two commercial trash collection bins sitting some 60 feet apart created a wide-panned stereo effect. Though organizers invited spectators to walk around and experience the installation from different vantage points, many sat either in lawn chairs alongside the building or atop blankets so they could see – and hear – both dumpsters at once. In between the two, dadaLab’s Emmett Palaima and Kyle Evans sat at laptops controlling a sequence of electronic signals that triggered robotic mechanisms to strike the receptacles and contribute consistent beats over which the human collaborators managed more... ambient sounds – like scraping the inside of the trash bins with metal rakes! 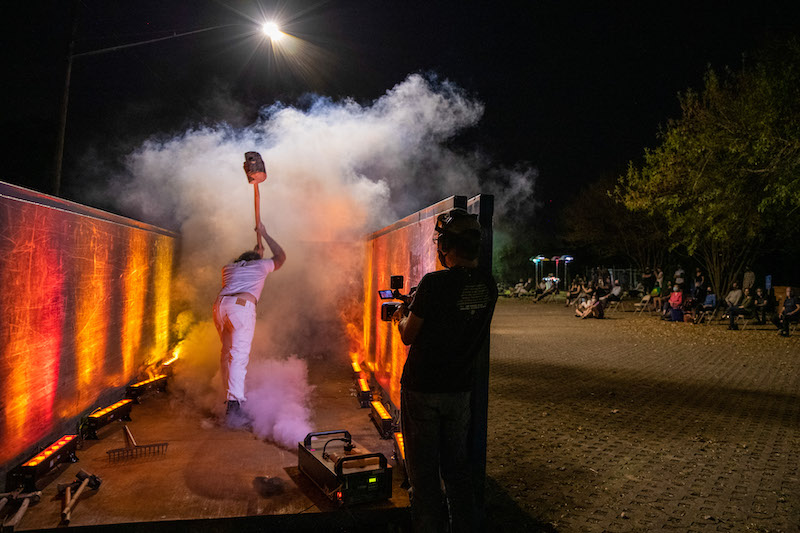 Thor Harris walloping the inside of a commercial dumpster with a hand crafted mallet. (Photo by David Brendan Hall)

Then came the giant wooden mallets.

The six-foot logs, hand fashioned by Harris, appeared to take considerable strength to wield, but resulted in a thunderous progression of well-timed hits from each side. From a distance, you merely saw the clubs swinging out from the top of the dumpster, followed by loud booms that sounded like the cinematic hits from summer movie trailers.

At that point, the fire began. Not actual flames, mind you, but orange lights and smoke from phasers that simulated a blaze emanating out of the trash units. Only missing, then, were the sparks, but for long: Hardy and Harris soon produced angle grinders and began shearing the upper edge of each dumpster, shooting six-foot streams of sparks.

First one, then the other, they created a call and response of metal-on-metal friction.

As the musical flames died down, the beatkeepers reemerged from the dumpsters wearing the percussive gloves and once again came together in the middle, clinking out a cool-down rhythm that served as a moment of peace after significant intensity. One could extrapolate much context out of it – a nation coming together after a tumultuous and divisive era – or no context all all: dumpsters do, in fact, just sound cool. In either regard, slamming on trash bins provided a catharsis many of us didn’t realize how badly we needed.