For Beto Martinez, the cultural synthesis of growing up in Laredo near the Texas/Mexico border, proved formative.

“I grew up crossing the river at will – it cost 25 cents – and having this sense of a cross-border relationship and connection,” attests the Austin-based guitarist, whose groups Grupo Fantasma, Brownout, and Money Chicha represent the boundary-less influence of Latin music. “People there speak Spanish and English interchangeably, and they have family on both sides. It’s an interweaved culture. To think that we could erect this massive wall – this monument to division – is just awful to me.” Martinez opposes the construction of a wall along America’s southern perimeter, viewing it as a waste of money, environmentally destructive, and not solving problems its booster Donald Trump claims it will. According to U.S. Customs and Border Protection, 307 miles of said wall existed as of September 1, though the previous month, the San Antonio Express-News reported that only 5 miles had been built after the President used the National Emergencies Act to fund his border barrier in February 2019.

“People there speak Spanish and English interchangeably, and they have family on both sides. It’s an interweaved culture.” – Beto Martinez

Around that time, Martinez began scheming to throw a big concert at the border in opposition to the wall, but his own busy touring schedule and, later, COVID-19 made it impossible to orchestrate. After contacts in Laredo, where his mother still lives, expressed interest in holding a similar virtual event, he jumped in to help organize. The show kicks off at 5pm CST and streams on Rock the Boder, Stop the Wall’s website and Facebook page.

“Thinking about this being the first time in the history of this city that we’d be cut off from the river is maddening and heart-wrenching.” – Raquel de Anda

The family of Raquel de Anda, an artist and activist, has lived on property facing the Rio Grande River for 50 years. Through she moved to New York recently, she returned home to Webb County when the pandemic hit and found a reason to stay.

“While I was here, my family got a letter from the Federal Attorney asking for right of entry to survey the land,” she explains. “That got us to change course and stay and fight this from happening. Having been raised on the border and always having access to this river, thinking about this being the first time in the history of this city that we’d be cut off from the river is maddening and heart-wrenching.”

With Trump’s wall estimated to cost $20 million per mile, de Anda points to health care, housing, and education for border communities as a more valuable use of money.

“We don’t even have a trauma center in Laredo,” she reveals. “If someone ends up in an emergency situation, they have to be airlifted out to San Antonio!”

Today’s broadcast is being led by the No Border Wall Coalition, the group behind the 450-foot “Defund the Wall, Fund Our Future” street mural painted in front of the federal courthouse in Laredo on Oct. 23. Founded last year, the group provides a political umbrella for those fighting the boarder wall’s construction. In addition to community action, protests, and marches, educating stakeholders and increasing voter awareness for Latinx populations remain the Coalition’s focus.

“Folks living here at the border know there is no emergency,” explains de Anda, who’s involved with the NBWC. “But they don’t know that, as land owners, they have a right to contest it and it’s feasible. Our strategy is ‘delay and cancel.’ Delaying is making sure everyone who does have land is represented and can gum up the process in courts as much as possible until after the election.

“Really, everything rests on cancelling [the wall], and in order to do that, we need a new administration.” 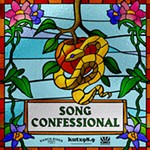