“Be Like the Water,” today’s second drop from the upcoming solo debut by Jonas Wilson, delivers a double barrel curl. Most importantly, inside the guitarist’s Science Fiction Post Blues dwells all the right ghosts in the machine. That the aqua reverberator simultaneously courses through a 20-minute tease of Bastrop distributes justice for all.

“It was surreal to move through this historic old town during the ghost vibe of a pandemic.” – Jonathan Horstmann

Wielding a bass, neck harmonica, and a looped beat and keyboard figure, Wilson delivers “Milk & Honey” in the middle of still-open vinyl treasury Astro Record Store à la Neil Young: “This ain’t the land of milk and honey/ It’s just the land of guns ’n‘ money.” Around the corner at the Tough Cookie Bakery – your second stop anyway after Astro – the producer, label owner, frontman, sideman, journeyman performs a keyboard/trumpet duet with brass handler Mike St. Clair on a retro-futuristic reverie titled “It’s Always Taken From the Blues.” For an encore, today’s new single happens live onstage at the Bastrop Opera House behind a breathy vocal and gothic the Edge riffing atop pre-recorded noir rhythms.

“Yes, I’m playing to multiple tape machines,” emails the one-man-band and collaborative force in Lomita, White White Lights, and Midnight Stroll with Ghostland Observatory’s Aaron Behrens. “So rhythm tracks are recorded on tape machines and I use ambient reels of drones in keys and synths linked to the machines. The only part I had to punch in post-production due a bad mic line is the bridge on ‘Be Like the Water.’ Rest is all live.

“It was tough as I was recording it and performing.”

“I use ambient reels of drones in keys and synths linked to the machines.” – Jonas Wilson

“We shot each performance on its own over the course of three days, and added a fourth day for some pick-up shots of walking around Bastrop,” writes in Horstmann. “It was surreal to move through this historic old town during the ghost vibe of a pandemic.”

“My favorite part is during ‘It’s Always Taken from the Blues,’” shares Horstmann. “I just adore Mike St. Clair and all of his work. You hear his trumpet before you see it, and there’s this reveal of him blowing the horn behind Jonas as he sits at the piano and the camera turns this corner. It's a very small moment, but an extremely gratifying one for me to watch.”

“Hope you enjoyed the episode,” signs off Wilson, whose Science Fiction Post Blues arrives Nov. 20. “I hope you enjoy the record as well. It’s a very new aesthetic for me.” Watch This: Nathan Harlan Dies on the Table in “Doctor” Video
Endochine and The Big Fix frontman debuts solo project 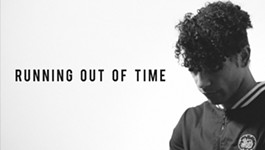