Music Rally Demands City Funding: “Put Up or Shut Up”

Thursday’s Council vote portrayed both as last stand ... and a start

Musicians, venue operators, sound and lighting technicians, bookers, radio deejays, record store owners, journalists, and fans – about 200 in total – converged on City Hall on a windy Monday afternoon for this month’s second Come & Save It rally. 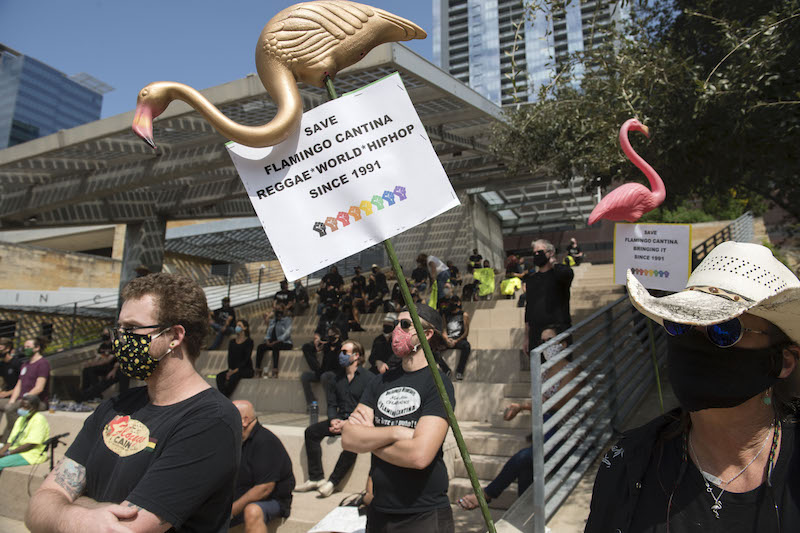 The crowd at Monday's Come & Save It rally. (Photo by John Anderson)

The event, co-organized by the Amplified Sound Coalition and Austin Texas Musicians, served as a show of force for Austin’s music industry imploring City Council to provide dedicated funding toward a Music Venue Preservation Fund via their SAVES Resolution (Item 52), which will continued to be hashed out on the dais Thursday. Among nearly a dozen speakers, appeals to the city to provide critical emergency funding for the music ecosystem grew more passionate and urgent.

“When venues close, the numbers coming to us increase exponentially,” revealed SIMS Foundation Executive Director Patsy Dolan Bouressa. “As of today, the city has given the SIMS Foundation absolutely nothing to do the work we’re doing. That’s the same as so many organizations that support this industry everyday, all year long.

“We’re here to demand that the city actually do something to save this music industry.”

“Nobody wants to live in an Austin without music and they damn sure don’t want to visit it,” he elaborated. “The city knows this when they spend millions of dollars marketing the ‘Live Music Capitol of the World.’” – Nakia Reynoso

Lauryn Gould, a full-time musician born and raised in Austin, called on council to modify the language for Item 52 to give it specific focus to the music industry, apart from other “vital economic sectors.”

“If significant aide doesn’t come through, our industry will die,” she stated. “As grim as that sounds, I actually see it as a glimmer of hope that this crisis will be the kick in the pants council needs to finally go through with meaningful financial support.”

Shinyribs frontman Kevin Russell orated about Austin’s much ballyhooed branding as the “Live Music Capital of the World,” a designation put into place in the summer of 1991, around the same time he moved here.

“For too long – too long – they have ridden our cultural coattails while taking us to the cleaners,” he said. “They have lured venture capital with our velvet-voiced crooners. They have wooed Silicon Valley’s best and brightest with our beats and bacchanals. They’ve charmed the pants off real estate developers with our down home blues, our sweet harmonies, and our honky-tonks.

Gregor said venue staff “desperately” wants to get back to work, but sees a long road that demands assistance.

“Trust us, when we say a show doesn’t go on with the flip of a switch,” she continued. “Our stages won’t go back to operational with a flip of a switch, either. Let us be part of this conversation, so we can think long-term planning and sustainable infrastructure. We can’t slap a Band Aid on the pandemic. We need to address the greater industry and all of its workers who are and have been in crisis.

“We’re done being held to a standard that people who are supposed to take care of us are not.” 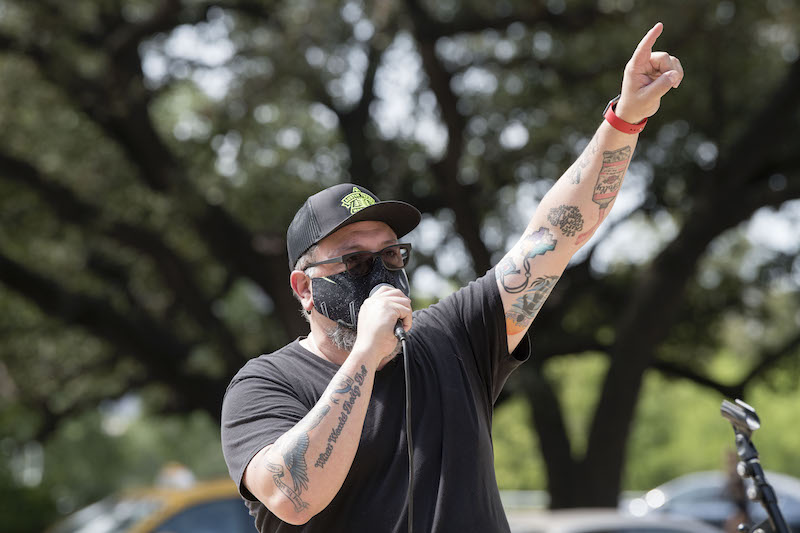 Nakia Reynoso at the Come & Save It rally. (Photo by John Anderson)

Singer Nakia Reynoso, also president of Austin Texas Musicians, told the crowd about one rally-goer who asked him if they could bring an instrument.

“I said, ‘Sure, bring any instrument you like, but please don’t bother playing it, because we need to remind the city: if there is no money, there is no music.’”

“Nobody wants to live in an Austin without music and they damn sure don’t want to visit it,” he elaborated. “The city knows this when they spend millions of dollars marketing the ‘Live Music Capitol of the World.’ ... They know how valuable the brand of live music in Austin is and they damn sure know it when they look in their bank accounts and see the tax revenue that we drive to this city every single year.”

“This is our last stand and I can’t tell you how important it is for us to come together. We have the most powerful voice in the city and right now is the time to use that.” – Pat Buchta

Additionally, Reynoso announced that, since March 1, more venues have permanently shuttered in Texas than any other state and Austin counts the most of any Lone Star city.

“That’s not by accident, folks,” he said. “It’s because our music ecosystem is built on matchsticks and all it takes is the biggest one to go up, and that’s the SXSW cancellation.”

In addition to City Hall, he also looked to the capitol building for much-needed assistance.

“As we’re standing here today, right down the street, Governor Abbott is sitting on $6 billion of federal relief funding that he’s not given out,” he said to an exasperated crowd reaction. “When this fight is over, we’ll turn our attention towards the capitol.”

“Within our private Facebook group alone, we have more people than the police and fire unions combined,” he noted. “Musicians have the most powerful political voice in this city and now is the time to use it.”

During his speaking time, Buchta reiterated what advocates want to see from council: “We need a dedicated music venue preservation fund and we need to choose a qualified grant administrator – one that understands how to work with our community. This is our last stand and I can’t tell you how important it is for us to come together.

“We have the most powerful voice in the city and right now is the time to use that.” 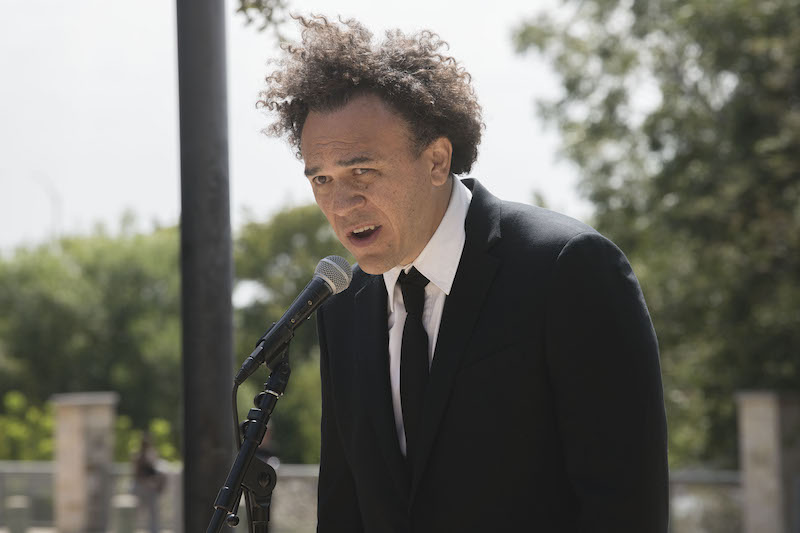 Anthony Ferrell of the Greyhounds, speaking on Monday (Photo by John Anderson)

Anthony Ferrell, singer and keyboardist from the Greyhounds, abstracted on the life-affirming function of live music spots.

“These venues are a place you can come when life has got you down, and now you can forget about that,” he said. “They’re places you come to celebrate when times are good. These are places where young people find their voice, and learn to express themselves and come up with the great ideas that lead us to our future together.”

READ MORE
More Come and Save It