Early this week, Austin events company C3 Presents – one of the most successful business to emerge from the local music scene – laid off a significant portion of its staff. Several C3 employees sent emails to their business contacts at the Chronicle as early as Monday evening informing them that their last day would be Tuesday. Multiple other former C3 workers, contacted thereafter, characterized the layoffs as “widespread,” “quite a few... a good majority,” and “almost everyone except the directors.” None spoke on record due to a lengthy non-disclosure agreement that more than one ex-staffer acknowledged. The layoffs impact multiple departments at the concert promotions giant.

The Chronicle contacted C3’s media representative, inquiring about the percentage of the workforce cut and specific reason for the layoffs, but has not received a response. In a 2015 interview with the Chronicle shortly after selling a majority business stake to industry giants Live Nation, co-founder Charles Attal stated C3 Presents’ workforce at 175 employees and growing.

The company, which also deals in artist management, canceled physical versions of its signature events during the pandemic, including Lollapalooza and ACL Fest. Charlie Jones, the mass gathering guru who co-founded C3 with Attal and Charlie Walker in 2007, exited the local music empire early this year to start his own events company called Four Leaf Productions. 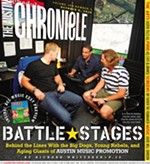