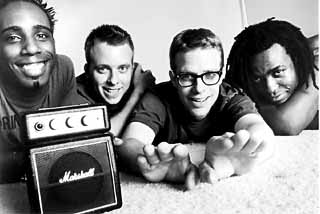 Montez Williams, guitarist and co-vocalist in onetime Austin power-pop breakouts Schatzi, lost his life Monday after his vehicle got swept away in flood waters near his home in Oklahoma City.

According to multiple news reports, a car driven by the 49-year-old father of two washed into the waters during flooding Monday night. The fire department recovered his body this morning after a three-day search. The accident took place just feet from his mother’s home where he’d been living.

“Our whole circle of friends had been on pins and needles since Monday night or Tuesday morning,” says Schatzi singer/guitarist Christian Kyle, friends with Williams since 1989. “It was hard not knowing the finality of what had happened.”

The accident took place just feet from his mother’s home where he’d been living.

Known as Monte to friends, Williams co-founded the band originally known as Blunderwheel with fellow Oklahoma transplants Kyle and Jason Westbrook after moving to Austin in 1992. They morphed into Schatzi in 1996. Following debut Joanie Loves Schatzi, which the Chronicle called a “snowboarding exhibition soundtrack waiting to happen,” the group gained further attention with 2001’s Death of the Alphabet EP.

At that point, the locals signed to Mammoth Records, owned by Disney Music Group, which released its ensuing full-length Fifty Reasons to Explode. This paper’s reviewer Melanie Haupt described that work as a “perfectly caffeinated romp through the pop jungle.”

Following a 2003 split release with emo/pop-punk stars Motion City Soundtrack and an unreleased full-length after Disney folded Mammoth into Hollywood Records, Williams left the band to focus on starting a family. Kyle recalls him finding out about his impending fatherhood while on tour and making the decision to go home right then to prepare.

“He did the right thing,” remembers Kyle. “We dropped him off in Austin and got back in the van and continued. It was a sad tour without him, because he was a vital part of our energy. He was the most fun, energetic, magnetic, positive dude you can imagine.

“I don’t think I’ve ever met anyone who didn’t like Monte,” continues Kyle. “He’s the kind of guy who walks in the room and the party starts. It could be 10 years since the last time you saw him, but when he shows up everyone smiles and has a good time.”

“I don’t think I’ve ever met anyone who didn’t like Monte,” he continues. “He’s the kind of guy who walks in the room and the party starts. It could be 10 years since the last time you saw him, but when he shows up everyone smiles and has a good time.

Marc Fort, who joined Schatzi as a bassist in 1999 and today continues as a marketing & communications specialist for the Texas Music Office, became friends with Williams in the early Nineties.

“He was a rock star, but he also had that rare ability to make anyone he was having a conversation with feel important and loved,” says Fort. “And no surprise he co-founded a band that ended up having a lot of success, as far as Austin bands go, because he was just that talented a guitarist and singer.”

Fort notes that Williams, who also played with the Ends and more recently in Space Cowboy, possessed serious culinary abilities and that he helped open and create menus at Torchy’s Tacos and Billy’s on Burnet. Further, as a Black artist in the largely white rock scene, Fort says Williams proved an encouraging force for young artists.

”I witnessed Monte be an inspiration to countless Black indie rock kids across the country, talking to them after Schatzi shows and helping them navigate the world – and feel seen in a music scene that didn’t always see them.”