Checking In: Welcome to The Kat Edmonson Show

“Writing and shooting a show every week is quite demanding”

Austin-launched lioness Kat Edmonson notched a birthday to start the week. Fierce Leo determination matches her jazz-era purr, most recently on February’s fifth LP Dreamer’s Do. Hunt it down Sunday nights on the singer’s Facebook variety show from her digs in New York, 7pm EST. Kat Edmonson: Under the circumstances, it’s going fine. My partner Aaron [Thurston] and I have spent the majority of the pandemic inside our apartment in Brooklyn. However, we just moved upstate.

We’re finally able to go outside and we have a lot more space to shoot The Kat Edmonson Show. We feel deeply grateful every day that we can be together through all of this.

“I’ve always wanted to have a variety show, so this is a dream come true. It’s odd to say that in the middle of a global crisis.”

KE: I’d just released my new album, Dreamers Do, in February and was on a 40-city tour of the U.S. Everything was going great and there was a lot of momentum. One week into the tour, we started hearing about this virus, but really didn’t know what to make of it.

My fans kept coming out every night and I continued to sign records and take photos with people. We made it halfway through the tour when venues began shutting down one by one. Within two days, the whole thing was over.

After about a month at home, Aaron and I created The Kat Edmonson Show so I could perform online. Aaron plays drums in my band and co-produced my last two records with me, so it was a natural thing to do this together. He handles the sound, the lights, and everything technical, although he considers himself a novice, so he dislikes when I mention it.

The show is part live music, part pre-recorded segments, and I spend a lot of time interacting with my audience, answering questions and taking requests. There are comedic sketches and also artist friends that come on. It’s so fun!

I’ve always wanted to have a variety show, so this is a dream come true. It’s odd to say that in the middle of a global crisis.

“We just moved upstate. We’re finally able to go outside and we have a lot more space to shoot.”

KE: I’m afraid to find out.

KE: My entire focus is on The Kat Edmonson Show now. Writing and shooting a new show every week is quite demanding, and takes up a good deal of my time. Meanwhile, I don’t know when we’ll be able to tour again and music sales have plummeted since the beginning of the pandemic, so I can’t focus on what isn’t.

I have to focus on what is – what I do have. I have this show where I can reach people and I’m really grateful. 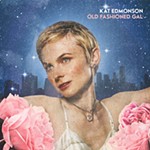 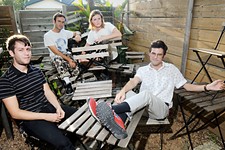