Checking In: Eric Tessmer Espouses A Policy of Truth

Repetitive motion disorders don’t simply affect office desk jockeys. Imagine what that looks like for a flame-throwing blues/rock shredder like ATX’s Eric Tessmer. “For me, [C-19] has been a powerful reset,” he emails. “I’ve been able to rest my hands and arms to a point of healing some old guitar-related injuries that were only getting worse with time.” 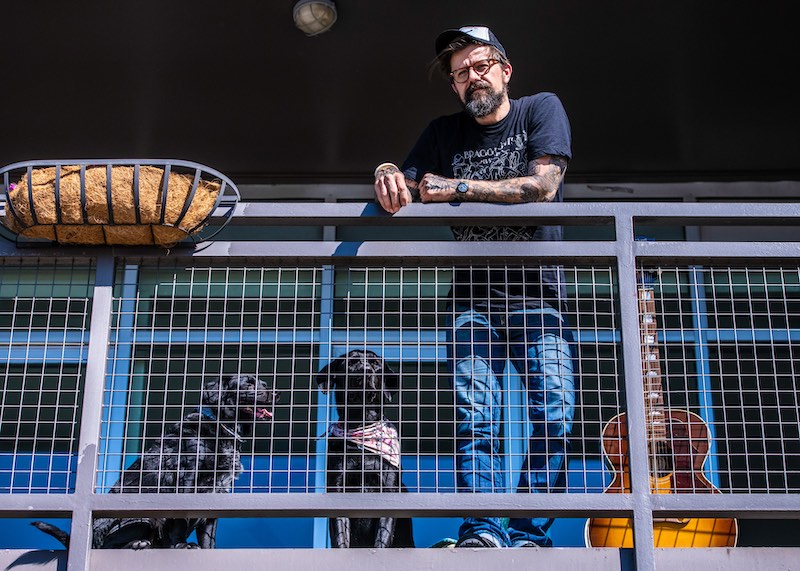 Tessmer and his two dogs, BB and Lucille, from our May photo series of local musicians and their pets (Photo by David Brendan Hall)

Eric Tessmer: For the most part, I’ve been sheltering in my apartment and my rehearsal space, both of which are in South Austin. My wife and our two dogs make the situation bearable. However, I’ve had a unique situation paralleling this worldwide crisis: I’ve kept myself as sheltered as possible since my parents, who still live where I was born in Wisconsin, have had some health issues lately and I’ve traveled up there a few times to help them with anything they need done around their place.

“This is the longest I’ve been off the road since I left home as a teenager.”

It’s just normal life and family stuff, but under the most surreal circumstances: 1,200 miles of food packed at home, refueling with rubber gloves, masks, etc., and then sheltering in a different remote place. The virus hasn’t hit up there like it has here in Texas – yet – but my dad is immune-comprised between cancer treatments and surgeries, so we have to be as careful as possible.

ET: I remember the exact moment vividly, since it literally happened the day after one of my biggest career moves. On March 13, we released the single “Policy of Truth,” featuring Nancy Wilson of Heart. There was so much going into it, so much that was planned around it.

We were all really excited, but then the next day it was like the world just stopped. I chuckle about it now. “The best laid plans of mice and men,” as they say.

But I’d be remiss if I didn’t tell you that no matter what, it’s a ripping version of a great song [by Depeche Mode]. I’m really proud of it and everyone should check it out!

ET: I’m not sure anyone can really know the scope of that yet. The whole scenario reminds me of the Tom Waits song “You Can’t Hold Back Spring.” It’ll find a way to come out.

You can’t hold back rivers or life or music. It’ll come bursting out of the seams. I will say it’s been incredible to see people work “alternate concerts,” most notably the livestreams. It’s almost a no-brainer for folks with larger fanbases to master that concept regardless of pandemics, since even under ‘normal’ conditions you can only tour one city a night.

“You can’t hold back rivers or life or music. It’ll come bursting out of the seams.”

ET: It’s definitely taken some getting used to. This is the longest I’ve been off the road since I left home as a teenager. As far as the work and performing are concerned, this may sound odd, but for me it’s been a powerful reset. I’ve been able to rest my hands and arms to a point of healing some old guitar-related injuries that were only getting worse with time.

My writing has become more relaxed and focused. It’s given me a chance to reconnect with what I really love about music and at the same time to question the quirks, habits, and mindsets that a lifetime of chasing music can grow on your brain.

This is random, but I also started a YouTube channel about working on old International trucks. I haven’t really promoted it yet. It’s more about staying busy and maintaining my sanity. Just something I always wanted to do but never had time.

Now I have plenty of time!

ET: Anything I think of and absolutely everything that’s playing. I’ll always listen to old John Lee Hooker, Johnny Guitar Watson, Hendrix, Sam Cooke, etc. You know, artists I always go back to.

Lately, I’ve been chasing down any stray song that enters my mind. I’ll actually sit through playlists now. I’ve never done that and I really LISTEN to everything.

I listened to hours of Eighties pop a la Steve Winwood, etc., the other day. I’ve never done that. I kind of feel like a kid again: no gigs and everything to learn. It’s exciting.

Other than music, that's what musicians do best – make the best of bad situations. 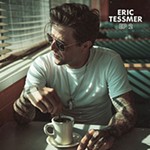