Khruangbin Slows It Down Houston-Style

Today arrives Mordechai, third LP from unlikely Houston success story Khruangbin. Five years in, the trio hypnotizes listeners with a melodic, meditative amalgam of global grooves. R&B, Thai funk, dub reggae, and Middle Eastern psych-rock are all chopped and screwed into a mix that sounds like the Lone Star State’s most international city. 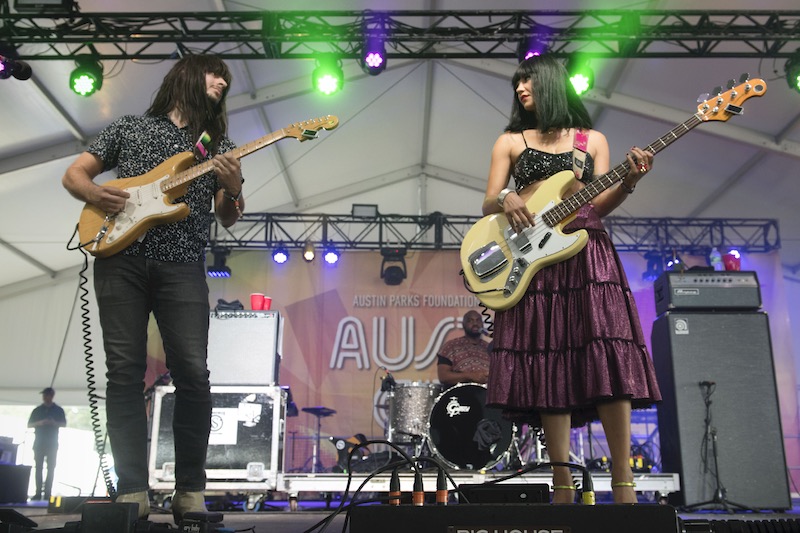 Khruangbin at ACL Fest on October 7, 2018 (Photo by John Anderson)

In September 2018, after nearly two weeks of Khruangbin’s publicist saying they wouldn’t be granting interviews leading up to ACL Fest, the entire band – bassist Laura Lee Ochoa, guitarist Mark Speer, and drummer DJ Johnson – would be available for a phone call on an hour’s notice. Like their music, conversation flowed easy, warm, thoughtful. The next day they embarked on a tour in support of Fort Worth soul man Leon Bridges, a twin billing that birthed this year’s sublime collaborative EP Texas Sun.

Austin Chronicle: Your music is so much about mood and vibe. Do you do anything to intentionally cultivate that vibe during the creative process?

DJ Johnson: It all comes down to arrangement. The vibe and mood that people experience is because of the space within the music itself. We try to stay within a certain set of instrumentation in the band – primarily bass, guitar, and drums – and that leaves a lot of space for things to reverberate and for vibe to happen.

AC: You completely disconnect from the outside world when you’re recording at the barn in Burton some 90 miles from downtown Houston. What does that allow for?

Mark Speer: Recording studios are by nature very sterile, quiet spaces. There’s no wind, no bugs, no sound. In the city, once you step outside the studio, there are tons of sounds, honking, all sorts of crazy stuff going on.

“Our playing, our vocabulary, the way that we are, everything is influenced by Houston. It’s the city we grew up in and we’re all influenced by DJ Screw.” – drummer DJ Johnson

In the country, there’s sound, but it’s like wind going through grass or distant birds flying overhead. So when we record in the barn, we like to have that stuff there because you don’t feel the need to fill up all the space since you have this beautiful sound happening behind you.

In a sterile studio, there’s no sound, so you feel the need to fill up all the space. In the barn, you get the creaking of the wood, or a bug buzzing outside.

Laura Lee Ochoa: It’s recorded live in the barn, so sometimes the barn will rattle, or some note will do something to the barn where it resonates in just the right way. You can definitely hear the barn in the records.

AC: You have such a wide range of influences from around the world, so I’m wondering what the process of musical discovery is like for y’all. Are you record nerds and crate diggers, are you mining the deep recesses of the internet, or how do you come across this stuff?

MS: All of the above. I think it’s kind of foolish to just be like, “I only dig through crates.” It’s not 1992, man. There’s so many better ways to find stuff and do it effectively, and not spend a week trying to find this one record.

LLO: But we do that, too. We go to record shops in a lot of the cities we tour in and luckily, because we’ve toured internationally, we can crate dig everywhere. But the internet is a big ol’ library. It’s infinite. There’s just wormhole after wormhole of discovery. Like Radiooooo.com: You pick a country, pick a year, and go on a hunt.

“Breaks. That’s it. We’re playing breaks, you know? And I’m playing music that my friends introduced me to while I was growing up in Houston.” – guitarist Mark Speer

MS: There’s stuff on Spotify that isn’t on YouTube, and stuff on YouTube that isn’t on Spotify. And there’s stuff we have on record that isn’t on any of those. There’s not one format that has it all. There are certain countries that never released records, they only release cassettes or CDs. I’m just looking for the songs, I don’t really care about the format at all.

AC: Your music has caught on outside of who you might expect to be drawn to this music. How do you explain that universal appeal and have you been surprised at all by the reception?

LLO: I think we’ve been surprised that there has been reception. We had all the odds stacked against us. Our band name is impossible to read or say. We’re mostly instrumental, we’re from Houston.

Now, Houston is popping, but at the time it felt like we weren’t gonna get out. I think the reason it is universal is because of all of those same reasons that were going against us: Our band name is not in English, and our music is instrumental, which allows it to be more of a universal experience.

AC: Speaking of Houston, some of my favorite songs of yours are the slow ones. They feel totally unhurried. There’s a part on “Friday Morning” where the song slows down so much that it almost sounds distorted and the first thing I thought of was DJ Screw. Has Houston hip-hop and Screw in particular shaped your music?

DJJ: We grew up with that. Our playing, our vocabulary, the way that we are, everything is influenced by Houston. It’s the city we grew up in and we’re all influenced by DJ Screw. Speaking as a drummer, I found a way to include subtle winks to DJ Screw on our first two albums, so we’re definitely influenced by that.

LLO: It’s amazing how natural it feels being from Houston that when you slow anything down it just sounds better.

MS: I’ve never been a fan of speeding anything up. I remember when a lot of modern hip-hop production started using sped up soul samples and I could never get with that. I’m from Houston, we have to slow it down!

AC: What is it about Houston that requires slowing down?

DJJ: At the time when Screw was doing what he was doing, it was also influenced by the drug culture. They were all sipping lean – codeine – which is a psychedelic. It makes things sound better when they’re slow and kaleidoscope-y, and lava lamp-y.

LLO: It’s like swimming through molasses and you want the song to swim with you. It’s interesting, though, because Houston is a huge city – a major city – but it doesn’t feel fast in a way that other major cities do. Even Austin can feel more dense and faster paced even though it’s smaller. I don’t think anyone is in a rush, because it’s still kind of the country.

“When the album was being pieced together, I was pulling a lot of inspiration from my Granddad. ‘Como me quieres’ was something that he asked me constantly, just part of our daily conversation. It means, ‘How much do you love me?’” – bassist Laura Lee Ochoa

AC: DJ, I hear a lot of subtle nods to hip-hop in your drumming, even references to specific breakbeats. What’s your relationship with hip-hop?

DJJ: My sense of rhythm and timing formed in the church playing gospel. I got into hip-hop later on and have always appreciated all forms of hip-hop from East Coast and West Coast to Southern regions like Atlanta. You just pull bits and pieces from everywhere, and that collage ends up being your personal taste and touch.

But yeah, there are nods to specific breakbeats in there. “Maria También” is a nod to “Apache” by the Incredible Bongo Band. All of it to me goes back to James Brown. He laid the foundation for everything funk related. A lot of it is that: Clyde Stubblefield and Jabo Starks, records that I listened to growing up.

MS: Breaks. That’s it. We’re playing breaks, you know? And I’m playing music that my friends introduced me to while I was growing up in Houston. I’m constantly doing little shout-outs and winks to my friends. Like, remember this cut, or remember this little melody?

AC: “Como Me Quieres” is such a beautiful and tender song that it didn’t surprise me to learn there was such a sweet back story to it. Laura, do you mind sharing the story of that song?

LLO: When the album was being pieced together, I was pulling a lot of inspiration from my granddad. “Como me quieres” was something that he asked me constantly, just part of our daily conversation. It means, “How much do you love me?” I spent every summer with him in Brownsville until I was about 7 years old, and it was something he asked me every day.

I’d have to say, “Con todo el mundo,” with all the world, Grandpa. He was the best and it’s a phrase that’s always been in mine and my immediate family’s vocabulary, so it felt like the right title for the album. If you were to think about that question for somebody that you love, who’s here or gone, that’s what that song feels like to me. It feels like longing. 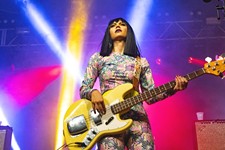 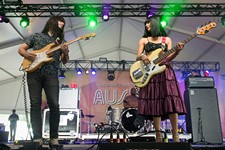 Live Shot: Khruangbin
Most can’t pronounce their name, but they can dance to it