Afro-Latin fusionist weighs in on the whole arepa 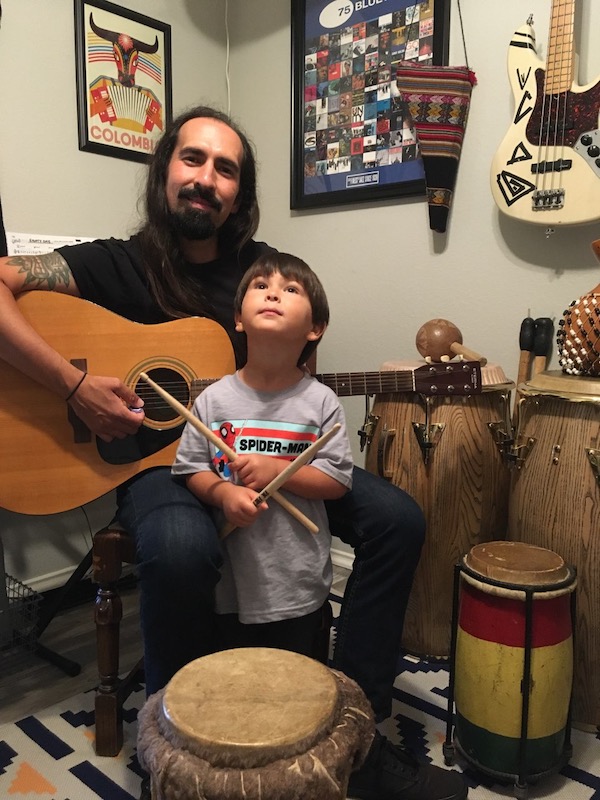 Nico sheltering at home with his Spider fam

Nicolas Sánchez Castro: In December, my family moved out to Dripping Springs. Raising a family and purchasing a home in Austin is pretty much unattainable for artists and musicians these days, but luckily we found a great spot out in the Hill Country. At the time, I was worried about the long commute back to town for gigs, but since the pandemic began, I've literally only been to Austin two times: Once to pick up some bamboo poles for my veggie garden and the other time to pick up a curbside order.

Priorities shift with the wind. It's crazy how quickly yesterday's worries are shadowed in the face of something like a pandemic.

The problems of the world seem amplified right now, but the reality is that we are all deeply connected whether or not we are conscious of it. Hopefully, we can move forward realizing that only in unity can we conquer the systemic racism, inequality, and utter disrespect for the Earth that is fed by the human desire for riches. The true riches are in the strength of our families and communities, not in bank accounts.

“Music and art are a mirror of the times, so I’m really excited to hear the inspirations that are produced in the next few years. The ‘20s’ will be the most important decade of all our careers, so revolutionary music is in order.”

I’ve been sharing this time with my wife, our 4-year-old boy, and our senior pets. Mediative time in the garden, family walks, solo jogs, and exploring new and old musical sounds have all helped me try and find peace in turbulent times.

My wife, Lindsay, a local metalsmith, jewelry artist, and instructor, has also been working from home, so if there’s a silver lining to all this, it’s that I'm incredibly thankful to get to spend this much time with my family. Three months at home with a 4-year-old does present its own challenges, however.

In an effort to deter a plea for early-morning iPad time last week, we agreed instead to construct a full-size human skeleton out of strips of cardboard from the recycling bin. This turned into an impromptu anatomy lesson and a YouTube rabbit hole was averted. And as I'm typing this, a trash skeleton, propped up in a seat at the dinner table, adorned with a Spiderman mask and bucket hat, is silently judging me from across the room, because that’s how 4-year-olds roll.

NSC: Superfónicos had a busy schedule (like every other band in Austin) for the spring and summer. And we were even booking some festivals for the fall. We just recently won a Black Fret grant and had plans to go to Colombia, where many of us have deep roots, to record material for our full-length debut.

The day after SXSW was cancelled, we played at 3ten with Brownout. The room was packed, but the vibe felt a little weird backstage before the show. Once we hit the stage though, we forgot about all that. The gravity of the situation really hit a few days later when all the March cancellations began, then April, then May, then the year.

The first thought for us, was, “How the hell are we going to pay my bills?” The realization that our business, our structure as musicians had totally been upended was difficult to comprehend at first. I am hopeful, though, that this time away will usher in a new era where funding for musicians and the arts in general are more readily available.

In the last two decades, it has become harder and harder to earn a living as a musician in town. Gentrification has pushed vibrant communities and artists out. Skyrocketing property taxes force the venue’s rents up and ultimately the margins are so thin, the bands get lowballed.

This isn't working for anyone and a new system will have to emerge, or our future as "Live Music Capital" will be debatable. Superfónicos at Mohawk on Jan. 2 (Photo by David Brendan Hall)

NSC: Live music has been a vital part of the human experience since the first sunrise. It’s our way of communicating with the ancestors, strengthening the community and working through our pain. The absence of these gatherings leaves a large hole in the hearts of the people, an emptiness in the spirit.

The musicians suffer too.

I can only speak for myself here, but music is like a deep well that is fed from an unseen aquifer. Without the live performance aspect, or even the rehearsal time with the band, the well starts to go dry. That's not to say ideas don’t arrive, but I’ve had to work harder at finding the inspiration.

The livestream thing is cool, but it's no comparison to the energy felt at a show. The audience is crucial to completing the circle. We need the audience as much as they need the musicians.

NSC: Before the pandemic, we had begun recording tracks for our record over at Public Hi-Fi with Jim Eno. We planned to record more throughout the year, but COVID stopped us in our tracks. Pun intended.

“Live music has been a vital part of the human experience since the first sunrise. It’s our way of communicating with the ancestors, strengthening the community and working through our pain.”

We did, however, just release a new single from this session called “El Adiós” (The Farewell). The song touches on the pain felt by those that have had to leave their homeland in search of a better life. It’s human nature to migrate and we’ve been moving around for millenia, yet immigrants still face persecution and discrimination for doing nothing more than protecting their families and searching for peace.The song is inspired by my father and his decision to leave Colombia in the early Eighties. We hope it can empower people to look past appearances, not be so quick to judge, and to live with more empathy towards our brothers and sisters.

On our first release “Suelta,” we spoke about letting go of that deep-rooted racism (“suelta, el racismo suelta!”), xenophobia, homophobia, and misogyny, and getting back to a life more connected with the Earth and her gifts. In 2020, these issues are all bubbling to the top. The time for action is now.

Reach out to your peers and listen to elders of all races and ethnicities and backgrounds. The only way to grow as humans and societies is to step out of the comfort zones and start questioning everything you have been taught by the system.”

NSC: Faced with a bunch of unexpected free time, I began jogging much more regularly starting back in March. I found an old iPod that only works when it's on shuffle, so I started using that during my jogs. I had started collecting vinyl heavily around 2008, so I stopped using that iPod around then and it’s been a bit of a time warp using it again.

Lots of classic Fania/salsa stuff [on there], like Larry Harlow, Ray Barretto, and Ruben Blades, as well as Colombian tunes from Pedro Laza, Fruko/Joe Arroyo, and Andres Landero. Most of these tunes I downloaded from a cousin in Colombia over a decade ago, so there are quite a few nice surprises I had forgotten about.

I've also been listening to a lot of classic roots reggae. I feel like the revolutionary spirit coming out of Jamaica in the Seventies struck the right balance of super "tuff" production, heavy basslines, and socially conscious lyrics that seem more pertinent now than ever. A lot of people think of reggae as fun in the sun type music, but if you look at its core, it was born in the tough streets of Trench Town, not the beaches of Negril. True Rebel music.

I’ve also been loving new music from Nemegata, Ley Line, and Frente Cumbiero. Looking forward to hearing the new Third Root single too. Their message is always on point. All of these will be on the soundtrack to the revolution!

Music and art are a mirror of the times, so I’m really excited to hear the inspirations that are produced in the next few years. The “20s” will be the most important decade of all our careers, so revolutionary music is in order. Pa’lante.

More peace and much, much more love to all.