Nonprofit reimagines the corporate gig in the age of COVID-19 “Back to normal” is no longer a realistic marker for American office culture as the COVID-19 health crisis ushers in a work-from-home paradigm shift.

“People have woken up and you can’t put the genie back in the bottle,” says Greg Carter, a local tech consultant who’s also a mandolin player and songwriter. “We’re never going to get away from some level of remote work because it’s so much more productive.”

As such, a certain type of corporate gig – where musicians perform exclusively for the workers of a company – could likewise “Zoom” into a new era. Carter identified that nearly two months ago when he began organizing virtual office performances for the music patronage nonprofit Black Fret, of which he’s a member. That Happy Hour Concert series, tapping three Austin musicians to swap songs in front of an audience of up to 100 corporate workers on digital meeting platforms, has taken off as a popular moral boost companies can provide to their employees.

To date, the program has staged 29 workforce concerts and paid over $40,000 to Austin musicians who’ve been largely out of work because of an industry-wide shutdown. Each artist gets paid a base rate of $500 plus tips, which Carter says have averaged $100-$200 per performer thus far. Repeat performances pay roughly $300 after tips.

To date, the program has staged 29 workforce concerts and paid over $40,000 to Austin musicians who’ve been largely out of work because of an industry-wide shutdown

Corporate clients pay the organization $500 per show. A $50,00 grant Black Fret received from the Stand With Austin fund has given them the ability to increase payouts and keep the project going as long as companies keep wanting Austin-sourced entertainment. Carter envisions a prolonged interest in the Happy Hour Concerts.

“I’ve had companies tell me, ‘Forget COVID, I could have used this over the last few years. I have a sales team that’s distributed throughout the U.S. We have to get them together by flying them to a conference so we can get some face time.

“’This could be a way to get our team together,’” he relays.

Tony Kamel, singer and guitarist for local Grammy-nominated bluegrass quartet Wood & Wire, has played several of Black Fret’s Happy Hour Concerts and sees it as a viable opportunity for musicians.

“It’s really relieved a portion of financial stress,” he offers. “That’s great money for one gig from your house that takes an hour and the people are really generous."

Kamel says his favorite element of the shows are getting to see other Austin musicians, who he’d heard of but never seen before, perform. He also notes it just feels good to play music right now in front of visible audience.

“On a livestream, it’s a little strange not to hear or see a reaction. They come in the form of Facebook or Instagram comments,” he says. “It’s nice to hear actually audible reactions and get a little bit of feedback. In some cases, the people I played for are from all over the world, including people in India and Europe.”

“I’ve had companies tell me, ‘Forget COVID, I could have used this over the last few years. I have a sales team that’s distributed throughout the U.S.’” – Greg Carter

Matt Ott, co-founder of Black Fret, says multiple musicians taking part in the happy hour shows have also expressed how good it felt to be back in front of an audience.

Ott says performance slots are open to anyone, not just artists who’ve participated in the Black Fret grant program. Interested musicians can register at AustinTexasMusicians.com and, when signing up, select the option about making yourself available to a digital income opportunity.

The Black Fret model, in which members pay annual dues that are pooled and allocated to bands and artists in the form of large grants, continues to exists as a unique bridge between musicians and the business world. This project exemplifies that since Carter and other Black Fret members have sourced the concert clients via word-of-mouth through their own professional networks nationwide. Now, they’re looking for more businesses to step up and take part in the concerts. They can get involved by reaching out at HappyHourConcert@gmail.com

“When life does get ‘back to normal,’ let’s send these musicians up to Dell and have them play in the area when these people work,” says Ott. “Until then, we’re going to have fun with this and get musicians paid. If it becomes a new revenue stream for musicians, that’s a win.” 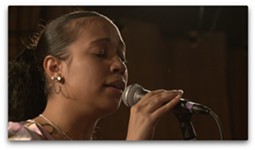