Music & Entertainment Division Director Erica Shamaly defended the requirement on Facebook: “You’re eligible, unless you’ve more than two months’ worth of your total living expenses sitting in savings for no other reason than to collect interest. This grant isn’t for you, but someone you know or play with who’s more vulnerable.”

“The overwhelming response is that in an attempt to be ultra-inclusive, musicians are actually being excluded,” he stated. “When people in a very vulnerable state see these hoops they have to jump through, [they] don’t bother to apply.”

Commission Chair Rick Carney said they had not been involved with penning the requirements, and further conversation circled around adjusting rules for a second round of grants.

“It’s important for musicians to be transparent about their situation and understand that there are a lot of people in need right now,” said Commissioner Patrice Pike. “The onus has been put on [the Music Commission] to make recommendations. We don’t author the policy. You have to decide to be as expeditious as possible, but also, unfortunately, decide who needs the money the most.” 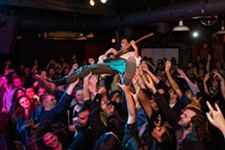